Following on from yesterday's review of Donald E. Westlake's pseudonymous 1967 Ace science fiction paperback Anarchaos, for the rest of this week I'll be blogging about a bunch more '60s and '70s SF and fantasy paperbacks. These books, however, were all written by celebrated British author Michael Moorcock, and were all bought as a job lot in February (that's how behind on blogging about my book acquisitions I am) from the Lewes branch of charity shop Oxfam – hence the "Lewes Book Bargains" in the title – at the same time as I nabbed those James Blish Cities in Flight hardbacks. The nice lady behind the till at Oxfam informed me at the time that they'd only recently arrived as a single donated collection, so as well as the Blish books I grabbed all of the Moorcock ones, which I think comprised the lion's share of the collection. (I left some Robert Heinleins and Philip Jose Farmers behind; I think they're still on the shelf if you want 'em.)

I bought the Michael Moorcock paperbacks for a couple of reasons. For one thing, Moorcock had been on my mind as he'd recently written a brilliant foreword to a book about Alan Moore I'd been editing at work (Alan Moore: Storyteller, available soon, folks). I've never read any of Moorcock's novels, but had always meant to, and so here was the perfect opportunity. But around the same time The Guardian newspaper ran an excellent interview with Moorcock by Hari Kunzru, illustrated with some of Bob Haberfield's wonderfully trippy covers for the Mayflower paperback editions of Moorcock's novels, and quite by chance it was the Mayflower paperbacks that the Lewes Oxfam had for sale. So over the coming days, I'll be showcasing them in a series of posts, beginning with these: 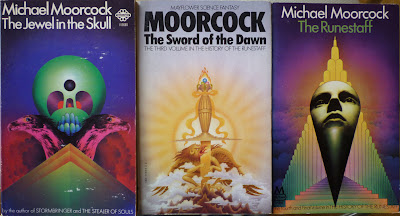 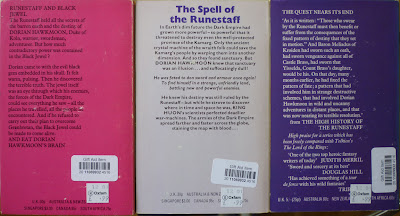 From left to right we have The Jewel in the Skull, published in paperback by Mayflower in 1969 (this copy is the second printing from 1972); The Sword of the Dawn, again published in paperback by Mayflower in 1969 (my copy is the third printing from 1972); and The Runestaff, once again published by Mayflower in 1969 (and again, my copy's a reprint, the first reprint from 1969). Together, they form the series The History of the Runestaff. Or rather, they almost do. You might have noticed I identified these books in the post title as a quartet. That's because there are four books in the series... and as you can see, I only have three – volumes one, three and four, to be precise. Which is a bit of a bugger, but I'm sure if I keep my eyes open I'll stumble upon volume two, The Mad God's Amulet, the cover to which you can see on the right there.

The novels were all published straight to paperback in the UK by Mayflower, but the first three in fact debuted in the States earlier than the British editions, published by Lancer from 1967-68. A couple of them also went under different titles: The Mad God's Amulet was titled Sorcerer's Amulet, while The Runestaff was titled The Secret of the Runestaff. Which only serves to further complicate Moorcock's already legendarily complicated bibliography.

I mentioned cover artist Bob Haberfield up top, who illustrated many of the Mayflower paperback covers for Moorcock's novels around this period. But on reflection, I'm not entirely convinced the covers of my three copies were illustrated by Haberfield. Certainly The Sword of the Dawn is by him; there's an image of that one on his website. But the other two? I'm not so sure. Haberfield did provide the cover for a later printing of The Jewel in the Skull, and for the 1973 third printing of The Runestaff, but the earlier printings seen above are markedly different in style to the rest of his work. So who illustrated them? If you know the answer to that, the comments section awaits...

I shan't attempt to summarize the novels, as their back covers already do a creditable job of that. But I will mention that they focus on Dorian Hawkmoon – and Hawkmoon also features in the next set of Moorcock novels I'll be blogging about (although again, annoyingly I'm missing one of the set). And those definitely boast Bob Haberfield covers...
Posted by Nick Jones (Louis XIV, the Sun King) at 05:44