Next in this series of posts on a bunch of Michael Moorcock '60s and '70s Mayflower and New English Library paperbacks I picked up in the Lewes branch of charity shop Oxfam fairly recently, we have these: 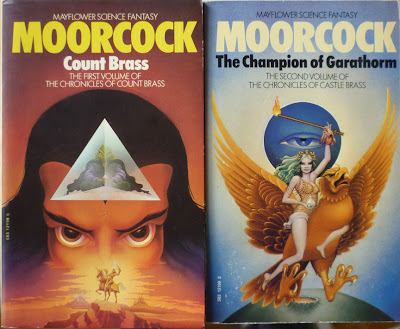 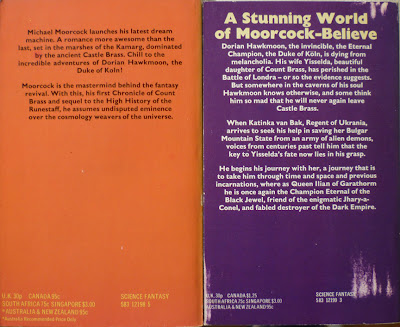 Count Brass and The Champion of Garathorm were both published in paperback in the UK by Mayflower in 1973 (the ones you can see here are both first printings). They are, respectively, volumes one and two of the series The Chronicles of Castle Brass... and once again, similarly to yesterday's post on The History of the Runestaff series – and as you've doubtless guessed from this post's title – I'm missing a volume. Because the series is actually a trilogy, and the Lewes Oxfam didn't have the third volume, 1975's The Quest for Tanelorn. Rats. Thanks to the miracle that is the internet, however, I can at least show you the front cover of the third volume, which is to the right there.

The Chronicles of Castle Brass trilogy stars Michael Moorcock's Eternal Champion, Dorian Hawkmoon, and is a direct sequel to The History of the Runestaff. But as Moorcock points out in "A Note to the Reader" in the second book, The Champion of Garathorm, that volume is also a sequel to the second book in the 1970 Eternal Champion series, Phoenix in Obsidian. What was that I said yesterday about Moorcock's bibliography being complicated...?

One thing that isn't complicated, unlike in yesterday's post, is the question of who illustrated the covers of these Mayflower paperbacks, because these ones were definitely all done by Bob Haberfield. According to the short bio on his website, Haberfield's book cover paintings "were influenced by Eastern art, religion and culture", an influence you can clearly discern in these covers. But it's even more apparent in the covers I'll be showing in the next post...
Posted by Nick Jones (Louis XIV, the Sun King) at 04:42