Doctor Who and the Target Novelisations, by Nicholas Jones

In many ways, Doctor Who is to blame for the existence of this blog.

When I was a kid, I loved Doctor Who. Tom Baker, the Fourth Doctor, was my Doctor. I literally cowered behind the sofa at his adventures. Stories like Revenge of the Cybermen (1975; cybermats!), Terror of the Zygons (also 1975; the Loch Ness Monster!) and The Brain of Morbius (1976; what the fuck is that thing?!) scared the living shit out of me. I vividly recall peeping out (very occasionally) from behind the settee at all of those serials, completely and utterly terrified out of my tiny mind. 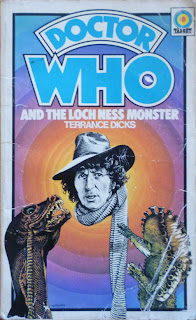 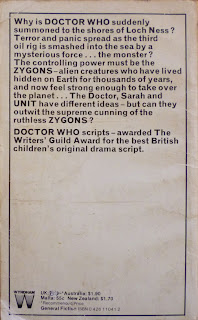 Or at least, I think I recall that. Because I also vividly recall watching Jon Pertwee's Third Doctor serial The Green Death, wherein luminous pollutants from a chemical plant mutate insects to monstrous sizes. Even now I can still clearly visualize that glowing green ooze in the Welsh mine; those awful, disgusting, slick, pale, outsize maggots; and finally that huge, terrifying fly, attacking the Doctor... Except The Green Death was broadcast in 1973, when I was just three years old. There were no video recorders around then and I've certainly never bought and watched it on video or DVD since, or caught a repeat of it on telly. So how can I possibly remember it so distinctly...? 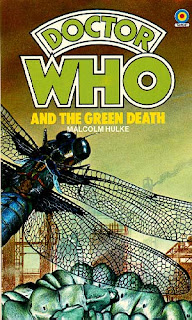 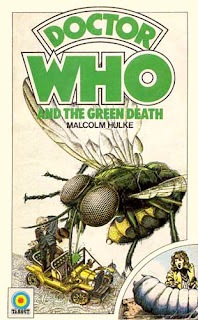 I followed Doctor Who throughout the Tom Baker years and into the Peter Davison ones, and then I did what a lot of young fans of the show did: I grew up and drifted away. I didn't watch many of the Sixth or Seventh Doctors' adventures, and though I did catch the 1996 Eighth Doctor TV movie, I didn't think much of it (and neither, for that matter, did anyone else). And the rest of the time, I pretty much forgot about Doctor Who.

And then in 2005 the series came back, revitalized by Russell T. Davies, and it was brilliant. My passion for the show was rekindled; I remembered how much I loved it as a kid, and fell in love with it all over again. Christopher Eccleston was great as the Ninth Doctor; David Tennant was even better as the Tenth. And now we have Matt Smith as the Eleventh Doctor, about to begin his second series under the guiding hand of Steven Moffatt this very evening. (Which is both incredibly exciting and incredibly sad, coming, as it does, so soon after the deaths of both Lis Sladen – Sarah Jane Smith – and Nicholas Courtney – the Brigadier.)

The return of Doctor Who to television in 2005 prompted me to start buying Doctor Who Magazine – something I don't believe I'd done since its days as Doctor Who Weekly in the late-'70s – within the pages of which I caught up on what Who fandom had been up to over the past twenty or so years. And via its features on past episodes, I also began exploring the history of the show itself... except, here again, often I'd find I had a level of familiarity with serials I couldn't possibly have watched: First and Second Doctor adventures from the 1960s, with William Hartnell and Patrick Troughton up against Daleks and Cybermen and Ice Warriors and Yeti. I hadn't been born when these stories were transmitted – so how did I know some of them so well? 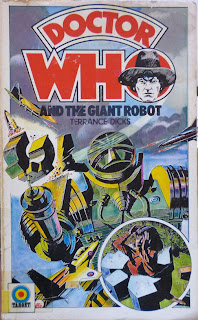 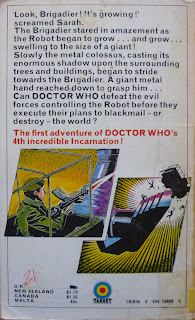 The answer came when I moved down from London to the Sussex town of Lewes in 2008. The move coincided with a rediscovery of novels and fiction – after years of only reading nonfiction – and a consequent and concurrent interest in collecting first editions. Serendipitously, Lewes was unusually blessed with secondhand bookshops, which further fuelled the flames. And it was whilst familiarizing myself with the town's various bookshops that I came across a selection of the Doctor Who novelisations published by Target in the 1970s. The recognition was instant. Their covers were like old friends I hadn't seen in ages: images of Tom Baker and giant robots, Zygons and other aliens I could place but not name; authors like Ian Marter, Malcolm Hulke and most of all Terrance Dicks. I knew these books, and by extension I knew the serials they had adapted, even if I hadn't necessarily watched them back in the '70s. I knew them because I'd read the Target novelisations. 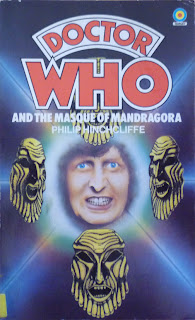 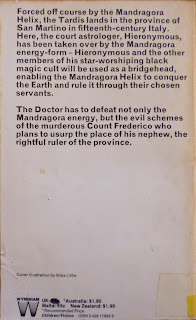 I've always been a voracious reader. As a child I'd spend long hours in my local library, devouring anything science fictional or fantastical I could get my hands on: I didn't care who the author was – and can't remember now any of the writers of these books – so long as they had spaceships or time travel or monsters in them. But the books I loved above all others were the Doctor Who novelisations. Sometimes these would be the W.H. Allen hardbacks, but more often they'd be well-thumbed Target paperbacks, with their cover illustrations by Chris Achilleos and Mike Little and Jeff Cummins and others.

I read every single Doctor Who novelisation Beckenham Library had on its shelves, often repeatedly. Some of the adventures were familiar from television; most I'd never encountered before: it's clear to me now that my "memories" of the Pertwee serial The Green Death come entirely from the Malcolm Hulke Target adaptation. A few of them featured Doctors I barely recognised: a short, jester-like Doctor with a shock of black hair; a Doctor who was more akin to a grandfather than the dynamic swirling-scarfed incarnation I was accustomed to.

After a while I started noticing the names of the authors of these short novels, and then determining which of those authors I preferred (Terrance Dicks was by far my favourite). What I was doing, without really knowing it, was developing critical faculties. This was the first flowering of my sense of the worthwhile versus the worthless, of a recognition of excellence over excrement (although I hasten to add none of the Who novels fell too far into the latter categories) – faculties which would eventually lead to my becoming a music journalist and then take me into publishing; faculties which would result in the blog you're reading right now. 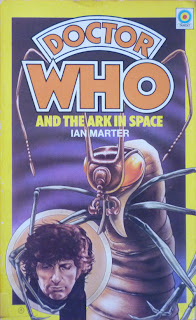 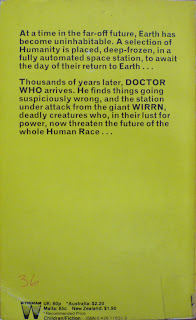 Because while for many fans of a certain age, the Target novelisations are important for the way they preserved the show in an era before video recorders and DVDs and the internet – and indeed preserved some Doctor Who serials that have otherwise been wiped from the BBC archives – or provided additional background elements or details lifted straight from the original scripts (character surnames, thought processes, etc.), for me they're important for different reasons. The Target Doctor Who books were what first got me hooked on novels all those years ago. But more than that, reading the Target novelisations back then, I learned to appreciate some of their authors' talents more than others, and followed the writers I liked the most, thus triggering a lifelong interest in serialised writing – fiction, nonfiction, novels, TV, comics, columns, diaries – and writers of serials. 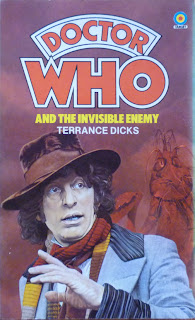 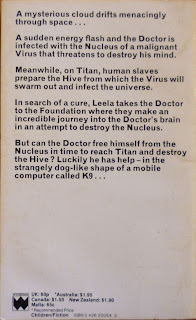 So it was entirely fitting that when I moved down to Lewes three years ago, and with my at-the-time newly rediscovered passion for books and book collecting gathering pace, the first novels I purchased in a Lewes secondhand bookshop were Target Doctor Who paperbacks. You can see some of them scattered about this very post. It was those books, and countless others like them, that first made me a confirmed book lover. It was those books that eventually turned me into a bibliophile. And so it was those books that were at least partly responsible for my finding a focus for Existential Ennui. Ultimately, then, if it wasn't for Doctor Who – or rather, if it wasn't for the Doctor Who novelisations – you wouldn't be reading this blog.

Of course, whether that's a good or bad thing is open to debate. Something to ponder, perhaps, as we all tune in tonight at 6pm for the new series... Incidentally, there is an entire book about the Target books – called, in fact, The Target Book, published by Telos in 2007. And all being well I'll be returning to that sometime down the line...
Posted by Nick Jones (Louis XIV, the Sun King) at 06:28