Thus far, 2011 has proved to be remarkably Donald E. Westlake-light on this 'ere blog, something that 2010 certainly wasn't. Fear not, though, gentle reader: I can promise plenty of Westlake goodness over the course of the rest of the year, as I'll be making a return to my Parker Progress Reports (which, for the uninitiated, is an ongoing series of reviews of Westlake's – written, of course, under the alias Richard Stark – Parker novels; the last one I posted was in January, on the fifteenth Parker novel, 1972's Plunder Squad) and I'll have all manner of Westlake Scores to boast about. 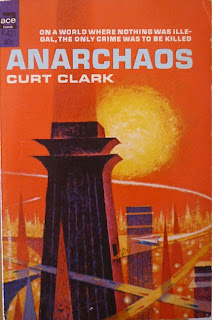 As it 'appens, many of those will be of a science fiction bent. For while it's true that Anarchaos, the pseudonymous futuristic 1967 novel I'm reviewing today (as promised in yesterday's final Ross Thomas post), was Westlake's only full-length SF work, he did write numerous short science fiction stories, which appeared in SF magazines like Galaxy, Amazing Stories and Fantasy and Science Fiction in the '50s and '60s. Some of those were collected – along with Anarchaos – in the 1989 compendium Tomorrow's Crimes, but by no means all of them. And as luck would have it, I've recently managed to secure a good selection of the SF mags in which those stories appear (along with a couple of other fab non-Westlake featuring titles), so look out for posts on those in the near future.

Not this week, however. This week's posts will have a SF and fantasy slant, but they'll largely be about British author Michael Moorcock rather than Donald Westlake, as I've got a bunch of Lewes Book Bargains to catch up on, namely some groovy '60s and '70s Mayflower and New English Library paperbacks of Moorcock's novels. Before we get to those, however, and as a tease for further Westlake SF stuff down the line, let's have a look at Anarchaos. 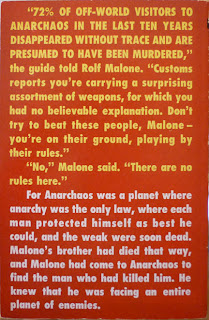 It's been remarked elsewhere that Anarchaos is like a Parker novel in space, and it's true that the novel does sit on the hard-boiled side of Westlake's ledger rather than the comedy caper side. But that's about as far as you could take the comparisons between Anarchaos and a Parker. For one thing, Anarchaos is written in the first person rather than the Parker novels' more chilly and removed third person; we experience events through the eyes of the novel's antihero, Rolf Malone, as he travels to the distant eponymous colony planet to find out how his brother, Gar, came to be killed. For another, Anarchaos is at root a tale of vengeance, a theme that does play into the Parker novels – especially the first one, 1962's The Hunter – but which is rarely the driving force for a whole book, as it is, rather wearyingly, in Anarchaos.

But the major difference between Parker and Malone is Malone is even more of a cold-hearted bastard than the legendarily emotionless Parker. Malone merrily massacres his way across the face of the titular planet and the book, offing a taxi driver near the start and then racking up murders with gay abandon. At least Parker only kills when it's absolutely necessary; Malone seemingly does it on a whim. The net result is it's hard to conjure any sympathy for the git; I'm as wary as the next man of falling into the trap of wanting characters in novels to be sympathetic, but if an otherwise heartless swine displays at least some appealing attributes – a sense of humour, say, or at least a relatable purpose – it makes the whole thing so much more digestible. No such luck with Rolf Malone.

Even Westlake doesn't appear to like Malone very much. During the course of the story he variously consigns Rolf to years of slavery, lops off one of his hands, and turns him into a drooling zombie pleading to be mind-wiped. At every misfortune Malone encounters, it appears fleetingly as if he might mend his ways. But ultimately he reemerges unchanged each time, ready to begin his murdering anew, a confirmed sociopath bereft of anything in the way of character development.

Perhaps it's the population of Anarchaos (entirely human, I should point out; thankfully there are no aliens in the novel) that Westlake really loathes. They certainly cop for it throughout, although as with Rolf they're a deeply unpleasant lot. Malone narrates the genesis of the distant colony at the start of the book, explaining it was set up eighty-seven years ago according to the principles of 19th century Russian anarchist Mikhail Bakunin, intended to be a utopia where men could decide their own fates free from the yolk of Union Commission tyranny. "The first generation on Anarchaos, in fact, didn't do too badly at all," offers Malone, but then the corporations moved in in search of profit and minerals, turning the place into "the longest-running planet-wide madhouse in the history of the human race."

Indeed it's the planet itself which proves the most interesting element of the novel, something you get the impression Westlake felt too. Circling a swollen red sun named Hell, half of Anarchaos rests in daylight while the other is in perpetual night, making habitation possible only on "a narrow band north and south along the sunward face". Westlake does well describing this nightmarish place, with its endless barren plains and snowbound nether regions, its cities dominated by corporate towers but consisting largely of shantytowns. Despite – or perhaps because of – its desolation it's a strangely beguiling backdrop to Malone's hunt for his brother's killer, and in the end proves to be a major causal factor in Gar's death. To which Malone's (very final) solution is both entirely in keeping with his murderous nature and, in a way, quite fitting.

Olman noted in his review last year that Anarchaos is really only for Westlake completists, and I'd go along with that. But considering that's almost certainly precisely the kind of person who'll be reading this review, I'd add that so long as you don't expect too much from the thing – and can bear to be in the company of the entirely disagreeable Rolf Malone for the duration – it's worth a read for Westlake's convincing evocation of a society destroyed by base profit-seeking motives – a theme that, for obvious reasons, still resonates today. Possibly even more so than it did when it was written.

(UPDATE, 18/4/11: Since we're on a Donald E. Westlake tip, might as well bung in a couple of Westlake-related newsy bits that have broken today. We'll skip daintily over the story – thanks for the heads-up, Adam – about Jason Statham, of all people – gah! – being slated to play Parker in a new movie adaptation, and move swiftly on to an update Shotsmag have just posted about the "lost" Westlake novel that Hard Case Crime are publishing next year in conjunction with my former employers Titan Books. Trent at Violent World of Parker's mentioned it before, but now we know it's called The Comedy is Finished, and is going to be published in hardback, only the second time Hard Case have issued a book in that format. Splendid news indeed! And you can see the terrific Gregory Manchess cover just above on the right there. Oh, and apparently my ceaseless blogging about hardback first editions had some small effect on the decision to publish the novel in hardback. Or so I'm told...)

Next up, some psychedelic post-apocalyptic fantasy, in the shape of Michael Moorcock's History of the Runestaff sequence of novels...
Posted by Nick Jones (Louis XIV, the Sun King) at 08:33