Your cup runneth over, o gentle reader, because today you get not one but two posts in this series on the job lot of '60s and '70s Michael Moorcock paperbacks I picked up in the Lewes branch of charity shop Oxfam a couple of months back. And this second post of the day marks the (almost) final selection of Mayflower paperbacks, namely these: 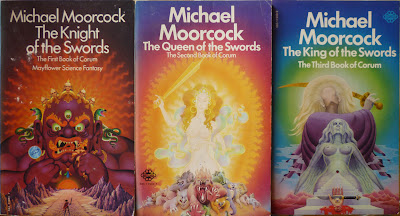 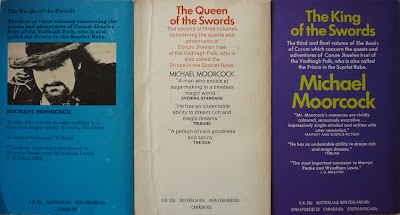 Left to right we have The Knight of the Swords, published in paperback by Mayflower in the UK in 1971 (the copy seen above is the reprint from 1972); The Queen of the Swords, also published in paperback by Mayflower in 1971 (a first edition in this instance); and The King of the Swords, this time published by Mayflower in 1972 (again, mine is a first edition). And unlike the previous post, where I was missing one of the books in the Chronicles of Castle Brass trilogy, here I have all three books in this particular trilogy. Well, kind of. Because these three form The Swords Trilogy, which is only the first half of the six-volume Books of Corum series – which focus on Corum Jhaelen Irsei of the Vadhagh Folk, also known as the Prince in the Scarlet Robe – the second half being The Chronicles of Corum. Although Corum is also an aspect of Moorcock's larger Eternal Champion concept.

Still keeping up at the back? I've said it before, but by crikey Moorcock's bibliography is convoluted. And his output was prodigious, too: the novels I'm covering in these posts all hail from around the same late-1960s/early-1970s period, so he must've really been cranking the buggers out. According to Hari Kunzru's recent interview with the author in The Guardian, around this time Moorcock could produce 15,000 words in a single day, which is an astonishing work rate. Mind you, I've managed to bang out two posts in one day today, so I can sympathize...

The colourful covers of these three Corum novels were all painted by Bob Haberfield, displaying the Eastern influences he was known for in his Mayflower covers. But I've only got one more Mayflower paperback left to showcase in this series, because the next couple of posts will largely feature New English Library editions of Moorcock's novels, although the covers to those are at least as glorious as Haberfield's ones...
Posted by Nick Jones (Louis XIV, the Sun King) at 12:33