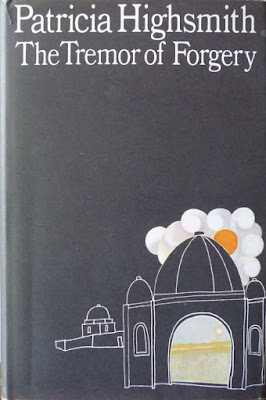 The Tremor of Forgery was first published in hardback in the UK by Heinemann in 1969 – the same year as the American Doubleday first, which you can see on the right there – under a wonderfully minimalistic dustjacket by Michael Dempsey (who also designed the jacket for the 1968 UK Hodder edition of Donald "Richard Stark" Westlake's debut Alan Grofield novel, The Damsel). Highsmith's thirteenth novel, it marks something of a departure in that it's a much more internal kind of story than its predecessors. Like all of Highsmith's work it's written in the third person, but the story is told from the perspective of a single character – as opposed to the often-adversarial viewpoints of two (usually male) protagonists – that of Howard Ingham, an American writer staying in Tunisia. 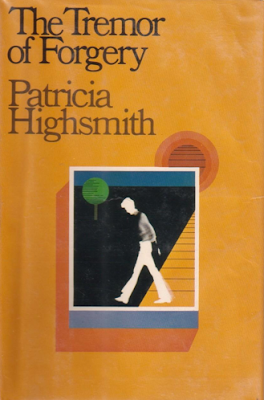 Ingham is in North Africa to work on a screenplay, but his plan is derailed when the film's backer, John Castlewood, commits suicide. Shaken by the news, Ingham nevertheless elects to stay in Tunisia and work instead on his next novel, and from here the story details his experiences in and around Tunis, as he meets and befriends another American, Francis J. Adams, and a Dane, Anders Jensen, all the while waiting to hear from his girlfriend back home, Ina. 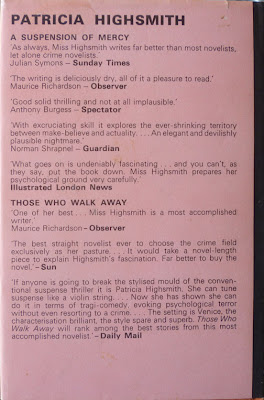 Those bare bones belie the true complexity and depth of The Tremor of Forgery. Among Highsmith's abiding concerns in all her novels are the psychology of crime and how morality can become relative in a given situation, and those themes are certainly explored at length here. But in concentrating on a lead character who is in many senses alone, Highsmith allows herself the space to really analyze Ingham – or rather, have Ingham analyze himself. He observes the Tunisian society around him, reflecting on its attitudes and how he feels about those cultural differences. He ponders his own sexuality, deliberating on his latent homosexual tendencies whilst also embarking on a brief fling with a young woman, Kathryn. He even questions the very nature of his – and the wider world's – existence.

The novel might on first inspection seem uneventful, but the way it portrays Ingham alone with his thoughts, or in conversation on a variety of topics with Adams and Jensen, makes for a rich and rewarding reading experience. And there are mysteries at the heart of the story. Cut off from America, with only letters to rely on for information, Ingham frets over the lack of communication from Ina. There's a hint of espionage, as Adams is revealed as an agent provocateur and propagandist (possibly delusional), broadcasting pro-American messages on a transistor radio. And there is the question of an attempted break-in at Ingham's hotel bungalow, during which Ingham uses his typewriter as a weapon against the intruder; thereafter Howard is unsure of the invader's fate, and is haunted by the notion that he might have killed the man. 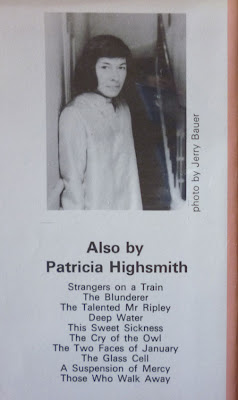 It's an extraordinary novel, unjustly overlooked these days in favour of Highsmith's better-known works, although that wasn't always the case: Graham Greene identified it as her "finest novel". I can safely say that, of all the Highsmith books I've read, The Tremor of Forgery is very nearly my favourite, beaten only by 1974's magisterial Ripley's Game. It really is that good.

And speaking of Tom Ripley, it's to him that we turn next, with a bulging omnibus edition of four of the Ripley novels...
Posted by Nick Jones (Louis XIV, the Sun King) at 05:25