Next in this series of posts on the stack of Michael Moorcock books I got in the Lewes branch of charity shop Oxfam, we turn to arguably Moorcock's most famous creation: Elric, the albino warrior sorcerer. The Lewes Oxfam had three Elric novels, all paperbacks, each from a different publisher. Let's have a look at these two first: 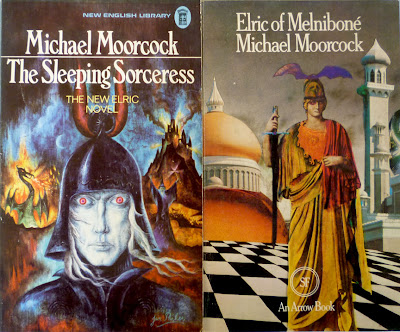 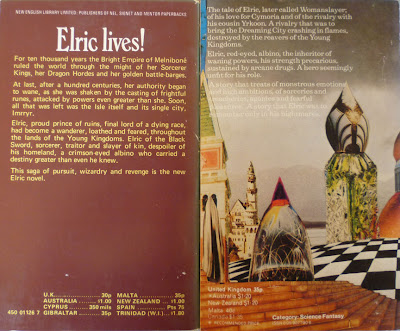 On the left is The Sleeping Sorceress, published by New English Library in the UK in 1972 (a first printing, and indeed, as the copyright page notes, "An NEL Original"), and on the right is Elric of Melniboné, published by Arrow in the UK in 1973 (again, a first printing, although the novel was originally published by Hutchinson in 1972). As with most of Moorcock's characters, Elric's history is somewhat labyrinthine, but I believe Elric of Melniboné predates The Sleeping Sorceress chronologically, even though it was published after it (at least, I think it was). And rather than me witter on in an uninformed manner about the plots of the novels, I'd suggest you take a gander at the back covers if you're interested to know what they're all about.

Neither cover illustration is credited in the books, but there is a signature on the rather fine The Sleeping Sorceress picture. Unfortunately, it could be read as either Jan Parker or Ian Parker, and there's seemingly no agreement online as to which it is. I'm leaning towards Jan Parker myself, possibly this Jan Parker, who was an illustrator around this period, and who these days paints abstract pictures. Meanwhile there's not even a signature on the Elric of Melniboné cover to help me out, so I haven't the foggiest who illustrated it, although it is a nice piece of pop art-style collage. And I'm also unsure who was the cover artist on the other Elric paperback I picked up in Oxfam: 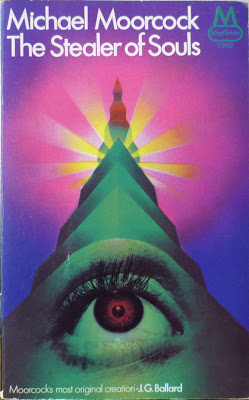 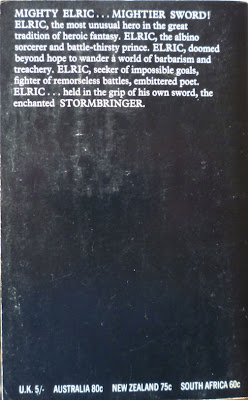 The Stealer of Souls, published in paperback by Mayflower in 1968 (this copy is the first reprint from 1969; the book was originally published in the UK by Neville Spearman in 1963). Clearly it's the same artist who created the covers for two of the Moorcock paperbacks I blogged about at the start of this series of posts, 1969's The Jewel in the Skull and The Runestaff: 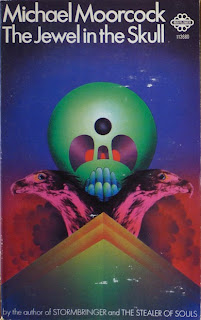 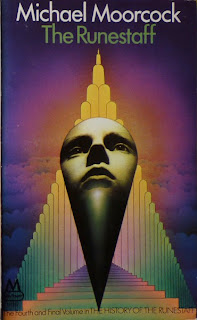 But I still don't know whether that artist is either the best-known Moorcock cover painter from this period, Bob Haberfield, or some other, as-yet-unidentified artist. As to what the book's all about, The Stealer of Souls is in fact a collection of Elric short stories that originally appeared in Science Fantasy magazine from 1961-62; in the Acknowledgements at the front of the book Moorcock notes "the encouragement and help given me when writing them by John Carnell, the Editor".

And that leaves us with just one more post to come now in this series, which will feature three of Moorcock's earliest novels (in slightly later New English Library editions): the A Warrior of Mars trilogy...
Posted by Nick Jones (Louis XIV, the Sun King) at 05:59