A Response to the Observer Article by Edward Docx, "Are Stieg Larsson and Dan Brown a Match for Literary Fiction?"

I had intended to start the week either with a Westlake Score or to begin my no doubt eagerly awaited Review of the Year. But yesterday there was an article on genre fiction in the Observer newspaper that, while it doesn't deserve a response as such – it was too wrong-headed to deserve anything other than perhaps a derisory snort – it does at least warrant one, even if it is from a little-read blog like this.

When I write posts like this one on Kingsley Amis' appreciation of the thriller, or this one on James Bond (or, um, this other one on Amis again), the point that I'm usually getting at – that genre fiction is often unfairly sneered at by critics – sometimes strikes me as... well... pointless. Outdated. After all, we have for a long time lived in a world where Raymond Chandler and Patricia Highsmith are feted, and for a shorter time in one where Stephen King is at last getting his due. Surely, then, the war is won. And then an article such as the one in Sunday's Observer New Review comes along and reminds me that not only do the old battles still need fighting, but a new generation of literary snobs have willingly donned the blinkers of their forebears and adopted even more intransigent positions.

Written by novelist Edward Docx (no, me either), the article is called "Are Stieg Larsson and Dan Brown a Match Literary Fiction?" Which, for a start, is a daft question. For one thing, it's a little unfair to pit Larsson and Brown alone against the massed legions of literary fiction – whichever spurious parameters Docx uses to define that elite gathering. For another, it leads to a fairly short answer: no, and don't be so bloody silly. Not even Larsson and Brown's most fervent fans would claim much for their idols beyond an ability to tell an exciting story (with perhaps some added political significance in Larsson's case). Neither are known as great stylists or mould-breaking originators; to hold them up as any kind of vanguard of genre fiction is just stupid. 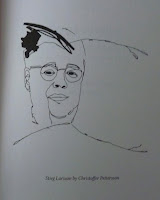 And anyway, I'm not interested in defending Larsson or Brown – and I doubt either would care at this point, since the former's dead and the latter's so ridiculously rich he's probably moved to an alternate newspaperless reality – nor in extolling the virtues (or otherwise) of their books. What I take issue with is the tone of Docx's article, the blanket dismissal of all genre works, the sneery attitude towards genre, and the fundamental misunderstanding of not only what genre is, and more importantly, why it is, but, seemingly, of fiction in general.

The thrust of Docx's argument is essentially this:

"Even good genre (not Larsson or Brown) is by definition a constrained form of writing. There are conventions and these limit the material. That's the way writing works and lots of people who don't write novels don't seem to get this: if you need a detective, if you need your hero to shoot the badass CIA chief, if you need faux-feminist shopping jokes, then great; but the correlative of these decisions is a curtailment in other areas. If you are following conventions, then a significant percentage of the thinking and imagining has been taken out of the exercise. Lots of decisions are already made."

Now there's a man sure of his own brilliance. I think my favourite part of that statement is the bit where Docx claims people who don't write novels don't comprehend the constrained nature of genre fiction. Which would be an incredibly supercilious and self-regarding thing to suggest – how can we mere mortals comprehend the inner workings of the novel? – if it weren't that Docx himself doesn't seem to "get" that all fiction is constrained. Writing is about choices, and beyond that, it's about the road not taken. Every decision a writer makes about their story closes off a multitude of other possibilities. All fiction, genre or otherwise, entails curtailment.

But let's accept for the moment that there are genre tropes that dictate how, say, a crime novel will develop. Docx's ludicrously simplistic view of crime fiction aside – not every crime novel has "a body on the first page" – the inclusion of a detective as a main protagonist (not my favourite type of crime novel, but anyway) probably does move the narrative in a particular direction – but no more so than the inclusion of a poverty-stricken Russian in an otherwise achingly middle class situation moves the narrative there in a certain direction. In both cases there is curtailment; in both cases decisions are already made.

Docx goes on to grudgingly admit that "None of this is to say that writing good thrillers is easy. It is still incredibly difficult. But it is easier." Again, there may be some truth in this. An experienced thriller writer might well find it easier to write a thriller than, say, a novelist with two books under his belt and a name to make for himself might find writing 'literary' fiction. But an experienced literary novelist might find writing easier than a novice thriller writer. Writing is different for everyone: difficult, easy, hard work, a breeze, and sometimes all of those things in the course of a single page. It's a specious argument.

Skipping over Docx's facile comparison of genre writing to McDonald's (Really? Is that the best you can do? And this from a novelist), we reach a more familiar critique of genre: that genre writers are basically in it for the money. Docx doesn't so much claim this as sneakily insinuate it when he states, "They can take the money and the sales and all that goes with that. And we can sincerely admire them for doing so. But they should not be allowed to get away with suggesting that these things tell us anything about the intrinsic value or scope of their work." Quite right. "They" shouldn't. And the best never have, whether Docx "sincerely" admires them for their sales or not. As Kingsley Amis wrote in his 1968 essay "A New James Bond", "most people who have done much writing will probably agree on reflection that to write at length just for money... is a uniquely, odiously painful activity; not really worth the money, in fact."

Here we approach the crux of the matter. Docx's argument only stands if you accept his largely unspoken assumption – a supposition that all his ilk take for granted – that there is a truth to literary fiction that isn't there in genre fiction, and that therefore literary fiction is better than genre fiction. In support of this, Docx trots out the word "relativism". Now, relativism pisses me off in any shape or form, from politics to criticism. Relativism is a consequence of post-modernism, and any thinking person knows by now what a load of balls post-modernism was. The merits or otherwise of genre fiction is not a question of relativism. It's insulting to suggest it is. It's a question, as it is in non-genre fiction, of good writing – a critical judgement which is anathema to post-modernism and relativism.

The best genre writers – I mean the very best; the Stephen Kings, the Richard Starks, the John le Carres, the writers I take Docx to mean when he talks of "good genre (not Larsson or Brown)" – don't choose to be genre writers, as Docx appears to believe. They simply choose to write, as best they can. Genre is merely something they're labelled by other people. Patricia Highsmith is only a crime novelist to those who haven't read her books; to those who have, she's a meditator on the psychology of twentieth century urban America. It just so happens that occasionally entails the not-so-accidental death of a protagonist – much as it did in actual twentieth century urban America, and indeed still does in twenty-first century urban America.

The mistake Docx makes, I think, is to believe in literary fiction as something it's patently not: truth. Fundamentally, all fiction is dishonest. As wonderful as the best novels are, they're still a pack of lies. There may be some truth in the writing, some effort to understand the human condition, to comprehend universal truths; but the creating of characters, the placing of them in scenarios and situations, the moving of them around: this is make-believe. No matter how honestly conceived, no matter how much effort a writer puts into making a novel realistic, real life is always so much more unanticipated. And that's fine: that's the pact we make with fiction so that we can have stories that appeal, confound, befuddle, enrage, but that ultimately take us out of ourselves and carry us along and deposit us at the other end. But it's all a lie; a story; a fiction. I mean, the clue's kind of there in the name.

Good thrillers, good crime novels, good science fiction, are as unexpected and surprising as good non-genre novels. The only difference is, they involve a murder, or a robbery, or are set in the future. To return to Kingsley Amis and his 1968 essay, "It might well be agreed that the best of serious fiction, so to call it, is better than anything any genre can offer. But this best is horribly rare, and a clumsy dissection of the heart is so much worse than boring as to be painful, and most contemporary novels are like spy novels with no spies or crime novels with no crimes, and John D. MacDonald is by any standards a better writer than Saul Bellow, only MacDonald writes thrillers and Bellow is a human-heart chap, so guess who wears the top-grade laurels?"

Anyway, that's my two-penneth. Go and read the article yourself, make your own mind up, and maybe write your own post on the matter. It looks as though we still need all the help we can get...
Posted by Nick Jones (Louis XIV, the Sun King) at 05:15