Our second Lewes Book Bargain this weekend was once again purchased at the funny charity shop across the way from Waitrose, and again cost a quid: 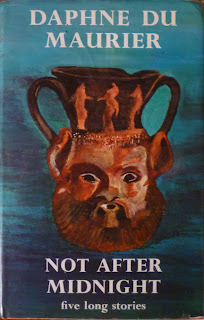 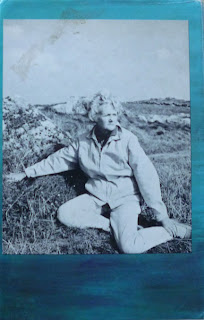 A UK hardback first edition of Not After Midnight by Daphne du Maurier, published by Victor Gollancz in 1971. The cover painting is by the exotically named Flavia Tower, who also painted the rather lovely picture adorning the jacket of Gollancz's 1969 first edition of Du Maurier's The House on the Strand. The photo on the back, meanwhile, is by Christian "Kits" Browning, Du Maurier's son; I like the way it makes it look as though Daphne's just had a fall and slightly injured her ankle.

Not After Midnight is a collection of, as the cover has it, "five long stories"; the reason I bought it – apart from I've never read any Du Maurier, and it was a pound – is that the first of those stories is "Don't Look Now", upon which is based Nicolas Roeg's eponymous 1973 film, easily one of the greatest ever made, and a firm favourite of mine. It'll be interesting to see how the source material stacks up.

There's a bookplate affixed to the front endpaper of this copy of Not After Midnight, identifying it as belonging to Dove Cottage, which is a residential care home in Kingston, a village on the outskirts of Lewes. So, as with many of the books I buy in charity shops, I'm sure, and without wishing to sound too ghoulish, probably somebody died in order for me to get my hands on the book. Which, in this particular instance, bearing in mind the nature of Don't Look Now, strikes me as strangely appropriate.
Posted by Nick Jones (Louis XIV, the Sun King) at 05:48