Here's a recent Donald E. Westlake Score that takes me one step closer to completing a run of particular editions of Richard Stark's Parker novels: 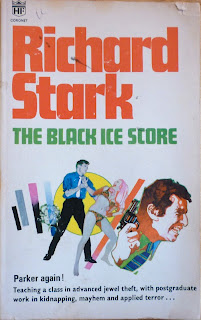 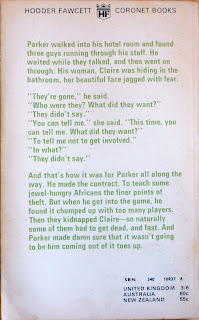 The first UK edition of the eleventh Parker novel, The Black Ice Score, published in paperback by Coronet in 1969 (originally published in the US by Fawcett/Gold Medal in 1968). This particular edition of The Black Ice Score is so scarce I've never seen another copy of it anywhere online; I've only ever seen the occasional copy of the second and third printings (1972 and 1974), the ones with the Raymond Hawkey 'bullet hole' covers. Currently there are a couple of copies of that edition for sale on AbeBooks for around £25. But of this earlier edition I'd caught nary a glimpse. In fact, I wasn't even sure it existed: I have copies of two of the other Coronet paperbacks with this style of cover design, The Rare Coin Score (Coronet, 1968, Parker #9) and The Green Eagle Score (Coronet, 1968, Parker #10), and Trent at Violent World of Parker has a cover for the similarly styled 1969 Coronet edition of Parker #12, The Sour Lemon Score. But I hadn't seen a cover for this edition of The Black Ice Score anywhere.

I still don't know who the cover artist was on these early Coronet editions – John M. Burns, perhaps? – but the indicia of The Black Ice Score does clear up a lingering question of chronology. Under "Other Coronet Books by Richard Stark", the following books are listed: Point Blank! (Coronet, 1967), The Rare Coin Score (see above), The Green Eagle Score (see above)... and The Split (Parker #7). Now, in this post, I'd reasoned that Coronet hadn't published The Split – the first 1969 Coronet edition of which has a movie tie-in cover – until after The Sour Lemon Score. But it turns out the movie tie-in of The Split was published in the UK right in the middle of the run of four Parker novels with The Black Ice Score-syle illustrated covers. Which will be of no interest to anyone other than me, but what the hell: at least I know now.

I still, however, don't know which of the Parker books was the first to sport the Hawkey bullet hole cover design. I think the next Parker book Coronet published after The Sour Lemon Score was the 1970 reprint of The Rare Coin Score with the photographic movie-style cover, and I have a feeling the 1971 edition of The Steel Hit (Parker #2) was the the first to sport the bullet hole look... but I couldn't say for sure. That's a (tedious) question for another day, though. For now, let's just gaze awhile upon my slightly more complete run (just The Sour Lemon Score to find now) of Coronet illo cover Parkers: 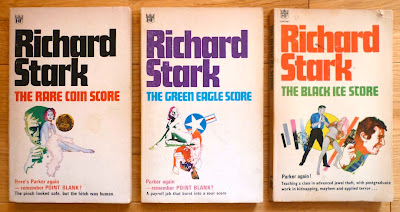