Next up in Existential Ennui's ongoing tribute to critically acclaimed but increasingly overlooked espionage/crime writer Ross Thomas, we have this: 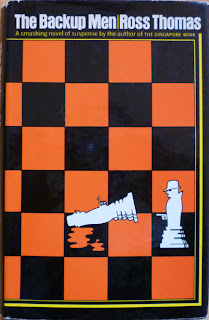 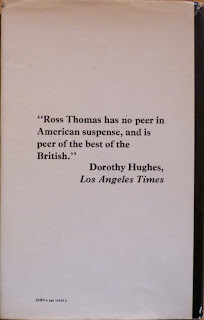 A UK hardback first edition of The Backup Men, published by Hodder & Stoughton in 1971 (published in the States in the same year by William Morrow). This is Thomas' sixth book, but the third in his series featuring saloon owner Mac McCorkle and his business partner and part time spy Mike Padillo, following 1966's The Cold War Swap (published as Spy in the Vodka in the UK in 1967) and 1967's Cast a Yellow Shadow (published in the UK in '68). This time out the pair have to protect the future king of an oil-rich country from assassination, with all the murky big American oil business that scenario entails.

For this one I took a punt on a sight-unseen copy from one of those big bargain books retailers that litter eBay. You know the ones: they never have an image of the book in question accompanying their listings, and the info in said listings can be scant and inaccurate (not stating a book is ex-library is a popular omission). In this instance, however, I asked a further question about the book and actually got a helpful response, so I snapped it up for a tenner. And it's in pretty good condition: the jacket's price-clipped, with a bit of edge wear at the spine, but the book itself is virtually pristine.

And that, in fact, sets it apart from most of the other seven or eight copies listed online by booksellers around the world. Because there's a curious defect associated with this Hodder edition of the book, to do with the copyright info: in most copies, that info is inked out with a black pen. Apparently this was done by Hodder themselves, although I have no idea why; I can't see anything egregious about the copyright info in my copy... and yes, that does mean what that implies – the copyright info is entirely unblemished in my copy: 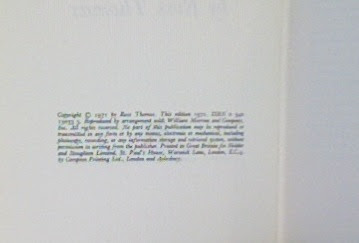 Which, judging by the only other un-inked-out copy on AbeBooks, which is on sale for £130, makes my one rather valuable. Of course, the market for Ross Thomas first editions seems to be virtually non-existent at the moment – basically, I'm it – so there isn't exactly a queue of people wanting to get their hands on this hardback. But even so. Always nice to have something rare.

The dustjacket on this edition – and indeed on the Morrow edition; both UK and US versions have the same jacket, I believe – was designed by Lawrence Ratzkin, whose playful, distinctive designs graced American editions of J. G. Ballard's Crash, Bruce Jay Friedman's A Mother's Kisses and Black Angels, a plethora of SF novels and anthologies, including Arthur C. Clarke's Childhood's End and Robert Silverberg's The Calibrated Alligator, and more besides. He was also responsible for many a cover for Harper's Magazine from the late '60s, which boasted some striking examples of ingenious text/image juxtaposition.

I think Ratzkin was (I'll stick with past tense, as I suspect he may be dead now) also a photographer: I'm not sure if this website was his, but Ratzkin, if indeed it is the same man, definitely took photos in and around New York; a selection of his black and white shots accompanied Eve Merriam's poems in the 1969 edition of The Inner City Mother Goose. One thing is for certain: he was exasperated by the way book publishing developed (if that's the right word) towards the end of the 20th century, as it shifted from editorial-led decision-making to being in thrall to the nebulous methods of the sales and marketing departments. As Ratzkin wrote in this 1997 letter to The New York Times, "Publishers and editors have relinquished literary taste and publishing judgment to the yahoos." Couldn't have put it better myself.
Posted by Nick Jones (Louis XIV, the Sun King) at 10:57