With the demise of my weekly Must Be Thursday posts – which, for the latecomers among us, consisted of my ill-considered and, as it turned out, increasingly boring thoughts on the American comic books I was planning on buying each week – it strikes me the comics content of this blog has declined considerably. This is probably of little concern to anyone but me, but it is a concern to me. I still like comics; I just don't read as many 'mainstream' (i.e. superhero, mostly) comics as I used to. But I do still want to have a certain amount of comics content on this blog, so as well as the occasional review or think piece, I thought I'd institute a new, probably irregular series of posts on a subject that's little-covered on the interweb: small press comics.

For the uninitiated, small press – or mini – comics are exactly what the phrase suggests they are: comics produced on a small scale, whether that be fifty copies or a couple of hundred. On top of that, many of them are also quite small. In both the US and the UK, small press comics blossomed in the 1980s, growing out of the 1960s underground comics in the States and '60s and '70s fanzines in the UK. Like the underground comics of, say, Robert Crumb, small press comics were – and still are – highly personal, for the most part eschewing genre (in particular superheroes). But unlike the undergrounds they're generally more contemplative and thoughtful than hyperbolic or frantic. More often than not they're created, written, drawn, printed (or photocopied) and even distributed by one person.

I was lucky in that I stumbled upon the UK small press scene in the mid-1980s, during its initial explosion, and I've kept up with it, on and off, ever since. And while many other aspects of comics get plenty of coverage on the internet, small press comics kind of get short shrift. There's things like Bugpowder and Smallzone, but little in the way of wider or historical analysis. So I figured I'd fill that gap. In Notes from the Small Press I'll be rummaging in the longbox of yesteryear (eyethangyew) for memorable, interesting, funny, or just plain strange comics or creators (mostly British, but some Yanks too), from the eighties to the noughties. Hopefully it'll be of interest to some of you.

And we begin with a comic that also handily acts as a primer for the UK small press scene of the '80s: 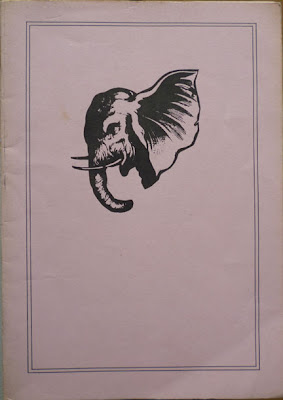 Fast Fiction Presents: The Elephant of Surprise was an A5-sized 'jam' – or more accurately 'relay' – comic published in 1986. The Fast Fiction in the title refers to the anthology comic The Elephant span out of (edited by Phil Elliott and then Ed Pinsent), but Fast Fiction was also the name of the '80s scene's mail order distributor (again with Elliott and Pinsent in command, as well as Paul Gravett, who came up with The Elephant's title), not to mention the name of the table the outfit had at the regular London Westminster Comic Marts. Essentially, Fast Fiction was the hub around which countless small press comics creators twirled, and the means by which I bought small press comics back then. The way it worked was, you either bought comics off the Fast Fiction table at the Westminster Mart, or picked up one of their four-page flyers, chose the titles you liked the look of, and sent in your order form and money. 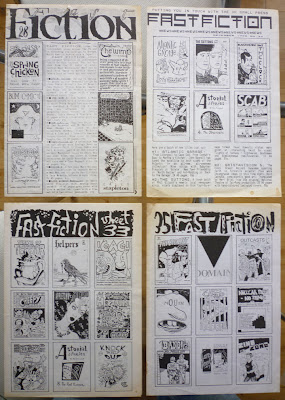 Which must seem to some in the internet age a charmingly old-fashioned way of doing things. Ed Pinsent has loads of great cover galleries on his website, both of the Fast Fiction anthology and other small press titles from that period – many of which I own, and some of which I'll doubtless be featuring on here at some point. It's a brilliant resource, so go have a look.

Anyway, for The Elephant of Surprise, twelve cartoonists were each assigned two pages in which to advance an overall story, using a character from the segment immediately preceding theirs and a character from the first two-page segment. They also had to reference elephants somehow. What's fascinating about the exercise is the creator cast list reads like a who's who of the '80s small press: the aforementioned Phil Elliott (who provided the first two pages) and Ed Pinsent, Rian Hughes, John Bagnall, Eddie Campbell, Glenn Dakin and more besides. These were the main movers and shakers in the scene, many of whom have gone on to enjoy much wider acclaim. 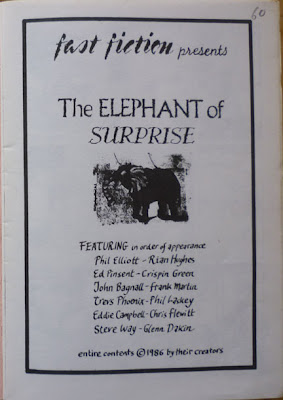 In the post-game analysis at the back of the comic, Ed Pinsent is amusingly frank about the setbacks encountered during the making of The Elephant and the relative shortcomings of the finished article, calling it "only slightly disappointing" and reasoning the best bits are those where logic breaks down entirely, particularly towards the end. In fact it's a gloriously barking enterprise from start to finish. As is his wont, Phil Elliott decides to kick off the story with a pub garden discussion about worms and the sanctity of nature set in an idyllic postwar England. To readers familiar at the time with Elliott's Tales from Gimbley this wouldn't have seemed out of the ordinary, but at a twenty-five year remove it's a choice that's as striking as it is oddball. 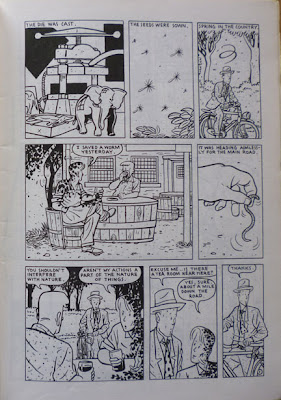 From there the story develops around an elephant statue and a religious sect with an anthropomorphic figurehead, adding in a killer robot for good measure. There are some sublime moments of slapstick, particularly around Phil Laskey and Eddie Campbell's segments (see below), but the real joy of the thing is in witnessing a group of artists and friends simultaneously reaching an early peak in their creative lives as they attempt to make some kind of sense out of whatever daft scribblings the cartoonist in front of them has committed to paper. 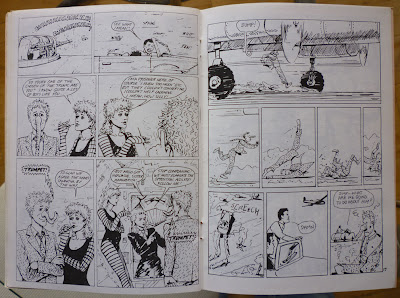 As Pinsent's outro notes, the final four pages from Steve Way and Glenn Dakin completely debunk everything that's gone before, with Dakin in particular doing his level best to rationalise the preceding madness. It's an entertaining end to a comic that's not only an intriguing and historically important snapshot of a particular time and place, but a fun read to boot, even today.

Notes from the Small Press 15: Spandex by Martin Eden
Posted by Nick Jones (Louis XIV, the Sun King) at 05:09