Two for the Money: Bait Money and Blood Money by Max (Allan) Collins

A Richard Stark/Donald Westlake obsessive's work is never done. I may be on hiatus from hunting for Stark and Westlake books (although never say never...), but there's always something Stark-related to collect. For example: 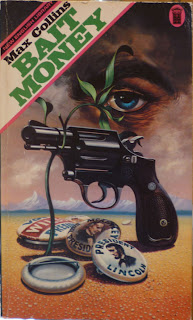 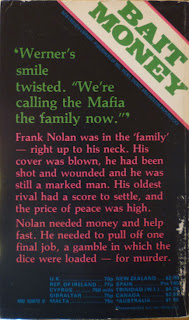 That there is a UK first edition paperback of the novel Bait Money by Max Collins, published by New English Library in October 1976. It's the first in Collins' series of books starring Nolan, an aging criminal who just wants to retire. As Trent at Violent World of Parker explains, Nolan was directly inspired by Richard Stark's character Parker – an older version of Parker, in fact, who of course has to perform one last heist before he can throw in the towel.

These days Max Collins is better known as Max Allan Collins, writer and co-creator of the Ms. Tree comics, the graphic novel Road to Perdition (the basis for the Sam Mendes film), and countless movie novelizations (Dick Tracy, Saving Private Ryan, etc.), crime series (Quarry, Mallory, Nathan Heller), comics adaptations (CSI)... the man is a veritable writing machine. I had some dealings with him when I was senior editor at Titan Books, which unfortunately didn't go anywhere, but I can report he's a thoroughly decent and witty chap.

Collins has written eight Nolan books to date, plus a number of short stories. Bait Money was the first Nolan novel, originally published by Curtis Books in the States in 1973. It was also, I believe, Collins' first published book, written in 1970 when he was twenty-two; Wikipedia suggests that the debut Quarry novel, The Broker, came first in 1976, but that's a common mistake, and one that's been repeated across the internet. That's probably due to confusion over the Pinnacle Books editions of the Nolans (as in the novels, not the 1970s singing stars): Pinnacle picked up the series with the third book, Fly Paper, in 1981, and reprinted the first two books that same year (possibly revised, although I'm not sure about that; Fly Paper and the next two books in the series, Hush Money and Hard Cash, were definitely updated by Collins, as they were originally written in the early '70s but left in limbo when Curtis was bought out by Popular Library). Thus Bait Money and Blood Money are often mistakenly listed as only dating from 1981.

This New English Library edition of Bait Money is incredibly scarce; I've only seen two other copies for sale on AbeBooks and Amazon UK. That strange, surreal cover is great: I haven't a clue who it's by, but whoever the artist is, they also painted the cover to the New English Library edition of the second Nolan novel, Blood Money (originally published in the US by Curtis Books in 1973) – and the NEL edition of Blood Money is even scarcer than the NEL Bait Money. But guess what? I found a copy of that too: 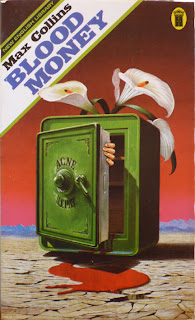 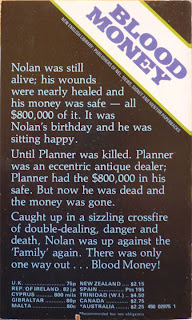 Blood Money was published by New English Library in January 1977. I noticed it on eBay, going for the outrageous price of a quid – which is pretty much what I paid for Bait Money too. Guess there aren't many Nolan fans in the UK... Collins' dedication in this one is particularly interesting in light of the fact he was so young when Bait Money and Blood Money were originally published. It runs: "This is for my parents, Mr and Mrs Max A. Collins, Sr, whose investment in me makes this the most expensive book they ever bought." (His dedication in Bait Money states simply: "To Barb for aiding and abetting".)

So there you have it. Two very rarely seen printings of Max Allan Collins' first couple of novels. And if you're intrigued by these but can't be arsed to go to the trouble of hunting down rare copies, both books are available from Hard Case Crime in the collected volume Two for the Money. Which brings us neatly back to the title of this post. 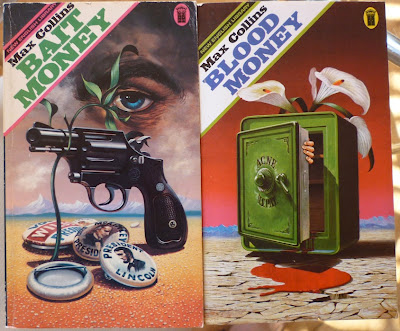