As wittered about earlier this week, the charity shops of Lewes (the town where I live, if you've just joined us) often throw up some first rate bargain books bounty. But they also throw up the odd curio too. Like this: 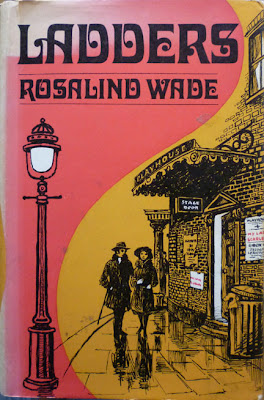 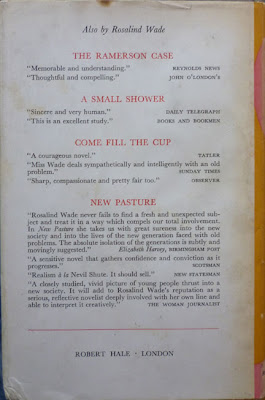 This is a UK hardback first edition of a novel called Ladders by Rosalind Wade, published by Robert Hale in 1968. I found this in the Oxfam charity shop's 'rare books cabinet', a glass-fronted affair by the shop window which mostly contains tatty, jacketless book club editions. I liked the look of the cover – which I'll come back to – but I'd never heard of the author, and I couldn't work out whether or not I liked the sound of the book; whoever wrote the publisher's blurb on the dustjacket flap was presumably trying so hard not to reveal plot elements that they ended up drafting one of the most opaque pieces of copy I've ever come across (although that Marvel Previews blather for Brian Bendis' Scarlet #1 from a few months back runs it a close second). See if you can make head or tail of this:

Louisa Burn and her husband Richard find themselves a few miles from the scene of their first meting thirty-five years earlier. Her circumstances at the time were far from pleasant, but a growing curiosity prompts Louisa to return to Mersetown alone. Drastic changes have taken place; few of the remembered scenes can be identified, but at least she locates the Royal Playhouse on whose boards she made her first stage appearance. In the dim solitude of the theatre she relives that momentous occasion. As she does so the heterogeneous company she worked with spring to life. She sees herself moving amongst them, a pale moth, gauche and unsophisticated. Yet out of the squalor and disillusionment generosity had flourished and much good emerged.

This is a novel of dramatic situations, extremes of character and circumstance, linked in perspective to the present time.

Is it, now? Well you wouldn't have guessed that from the masterpiece of missing information that precedes that last sentence. I've read that jacket copy three or four times now and I still have no idea what the book is about. Although maybe that was the intention – to get potential readers so perplexed they felt irresistibly compelled to buy the book. That might explain the frankly unnecessary deployment of words like "heterogeneous".

But as I stood in Oxfam staring uncomprehendingly at the jacket flap, I suddenly realised that the scrawled dedication on the endpaper opposite was slightly more than simply a message from a relative or loved one: 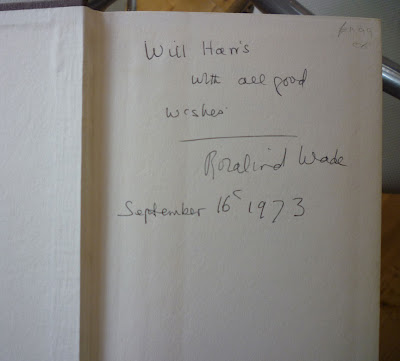 Yep, the inscription is by Rosalind Wade herself. So who was Rosalind Wade? A Google search of her name doesn't throw up much in the way of information (my God! No Wikipedia page!), the top hit being a link to British thriller writer Gerald Seymour, author of Harry's Game and many other bestsellers. For Wade was Seymour's mother, married to his father, William Kean Seymour; she kept her maiden name for her writing career, a career that was notably prolific, as, having done a bit of research for a change, I can now reveal...

Rosalind Wade was born on 11 September 1909 and died on 25 January 1989, leaving behind a body of work comprising well over twenty novels (all out of print now, Ladders being one of the final few) and numerous short stories. She published her first work at the age of twenty-two, with many of her early novels written under her full name, Rosalind Herschel Wade. She was one of a number of writers (including Desmond Hawkins) who congregated at David Archer's bookshop on Parton Street, London, in the mid-1930s, a so-called radical bookshop devoted to poetry and left wing politics (Archer was one of Dylan Thomas' first publishers).

Indeed Wade may be better remembered these days as an editor and patron; she was editor of the Contemporary Review, chair of the Society of Women Writers and Journalists and the Alresford Historical and Literary Society, a founder member and vice-president of the West Country Writers Association, and an active encourager of young writers. Her own novels were celebrated for tackling tricky emotional issues – Come Fill the Cup (1955) is about alcoholism, for example – and for their character insight and plotting. But she was also interested in ghost stories, and contributed to a number of spooky anthologies, including After Midnight Stories (1985).

As for that jacket illustration, it's not credited, but there is a signature at the bottom right: "Biro", which means it's almost certainly by Val Biro, who created logos and endpapers for some of naval author Douglas Reeman's book.

How's that for a well-researched post? Rest assured I shan't be making a habit of it.
Posted by Nick Jones (Louis XIV, the Sun King) at 05:58