Presenting the second in a short and no doubt intensely fascinating series of posts about the books wot I done bought recently in the many and varied charity shops of Lewes. And next up we have this:

A 1998 UK Hutchinson first edition hardback of Robert Harris' Archangel, his third novel, following Fatherland (1992) and Enigma (1995). I have to admit I'm rather partial to a bit of 'arris. I've read Fatherland and The Ghost, and both were entirely solid thrillers – eminently readable in that pacy, unfussy contemporary thriller manner. A former journalist, his books always offer some neat twist on politics or history; Archangel is his take on the notorious Hitler diaries scam, with secret papers by Stalin standing in for the forged reminiscences of Der Fuhrer.

Even though copies of the first edition of Archangel are in plentiful supply it's still a good bargain, and when I opened it up, I realised it was it was even more of a bargain: 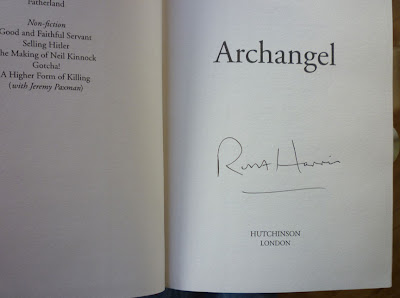 It's a signed edition. And again, if you look on Amazon you'll find plenty of signed editions for not very much money, but even so, it's not a bad one to stumble across in a charity shop. Mind you, having said that, it's not perfect: about a third of the way into the book a tipped-in page has come loose. You have to wonder there, how did the printer/publisher manage to miss a page out? Slight oversight.
Posted by Nick Jones (Louis XIV, the Sun King) at 09:49