Westlake Score: A Jade in Aries by Tucker Coe

I've got a few interesting (to me, anyway; I can't even begin to guess about you, whoever you may be) things to blog about this week, including a brand new (highly) irregular comics feature, some recent scores from Lewes' charity shops, some rather rare Max Collins paperbacks (which have a Richard Stark connection), and perhaps more besides, time permitting. But let's kick off the working week with a Westlake Score: 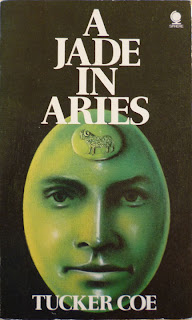 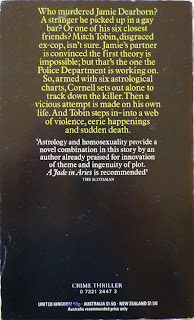 That's a UK paperback of Tucker Coe's A Jade in Aries, published by Sphere in 1975 (originally published in hardback in the UK by Gollancz in 1973; originally published in the US in 1970). It's the fourth of the five books Donald E. Westlake wrote under the pseudonym Tucker Coe, all of which star disgraced ex-cop Mitch Tobin – I blogged about the first one, Kinds of Love, Kinds of Death, here. In A Jade in Aries Tobin has to work out who's murdering a group of gay friends; there's also an astrology aspect to the story, a belief system Westlake/Coe states in a short note at the start of the book he neither believes nor disbelieves – it's just an aspect of the plot.

Sphere only published two of the Coe novels, the other one being the third one, Wax Apple, which they also published in 1975 and which sports a very similar green hued cover (no idea who the artist for them both was/is). One thing that's remarkable is that, even today, there are still lots of people who haven't realised Coe was Westlake: I picked up this paperback of A Jade in Aries for a quid from a dealer who'd simply listed it on eBay as being by Coe, with no mention of Westlake, and if you search for Coe on AbeBooks you'll find that at least as many sellers don't mention Westlake in their listings as do. Seems Tucker Coe is still a fairly well kept secret.
Posted by Nick Jones (Louis XIV, the Sun King) at 07:19