Harry Maxim versus the Book Clubs

NB: This post was written before I became aware of "export editions", which the below copy of The Conduct of Major Maxim probably is, rather than a book club edition.

This turned up over the weekend: 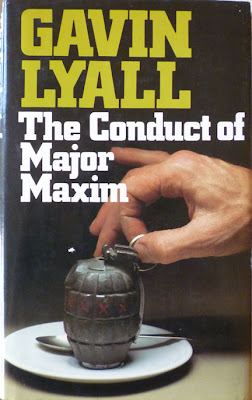 A UK hardback first edition of The Conduct of Major Maxim by Gavin Lyall, published by Hodder and Stoughton in 1982, dustjacket design and photography by Melvyn Gill, based on a concept by Mr. Lyall himself... Except it's almost certainly not a true first edition: there's no price on the jacket front flap, which means it's more than likely a book club run-on from the first edition, even though there's nothing else on the jacket or in the book to suggest that – no "BCA" in sight. The book merely states it's a first printing. (I've got a Hutchinson copy of Kingsley Amis' Russian Hide and Seek that's like this too – exactly the same as the regular first edition, except no price on the front flap.) So it was wrongly listed as a proper first by the seller.

Then again, it was cheap, and it's in good nick, and it's effectively a first, so what the hell. But it does illustrate one of the problems of buying books online, particularly books by popular-at-the-time authors from the 1970s and '80s, when BCA – Book Club Associates – was at its peak. For the uninitiated, BCA were/are a mail order club whereby members purchase cheap versions of current novels, specially printed by the publisher of the book for the club. Sometimes BCA editions would have different covers to the regular editions, but more often they'd carry the same cover. I don't know if BCA still works like this, but it used to be that subscribers or members of book clubs got an initial number of books for literally pennies, but then had to commit to buy a certain number of books from BCA's regular mail-outs for at least a year thereafter at higher – although still reduced – prices.

Book club printings of books can come some time – years even – after the first hardback printing, but they can also be run-ons of the first printing; the publisher will increase the initial print run of the book to include however many copies BCA expects to sell to its members. Book clubs buy these books from publishers at a knock-down rate, often not much more than the cost of the printing. The benefit to the book club is obvious – they can sell books to their members cheaper – but the benefit to the publisher perhaps isn't so clear. In fact what the publisher gets by increasing their print run to account for a BCA order – which is 'firm sale', so there'll be no returns (unsold copies, which are the bane of publishers' existences) from the book club – is a better deal from the printer: the more books you print, the better price you get per unit, thus hopefully increasing the publisher's profit margin on their portion of the print run.

For most book collectors, BCA editions are pretty much a no-no. What a book collector is generally looking for is a first edition/first impression (printing) of a book. (I'm not going to get into why this matters to collectors, 'cos that'll open up a whole other can o' worms; just take it as read that it does.) Unfortunately, there are so many book club editions out there, particularly with books from that '70s/'80s period, that there's bound to be some confusion. A lot of the time you can spot a BCA edition fairly easily: they may be a slightly smaller size than the original if they're a subsequent book club printing, or on slightly cheaper paper; they may have 'BCA' on the jacket spine instead of the publisher name, or on the spine of the case (or both); they may have "Book Club Edition" printed on the copyright page. But these signs aren't necessarily always present, especially if the book club edition is a run-on – i.e. extension of – the first printing.

Despite all the words expended above, I'm actually fairly relaxed about first printing book club run-ons like this. As I say, there's virtually no difference from the regular first edition. But other collectors are less relaxed, and it's a minefield out there on Amazon Marketplace and AbeBooks and eBay and the rest. Some dealers know what they're talking about and will state if a book's BCA; plenty more neither know nor particularly care, and might even purposely withhold the information if they do know. I'm inclined to give the dealer in this instance the benefit of the doubt – it is only some missing price info, after all – but then I'm a forgiving sort. Sometimes.

Anyway, all that aside, the arrival of The Conduct of Major Maxim – the second in Gavin Lyall's 1980s series about British spy Harry Maxim – does mean I now have all four Harry Maxim books: 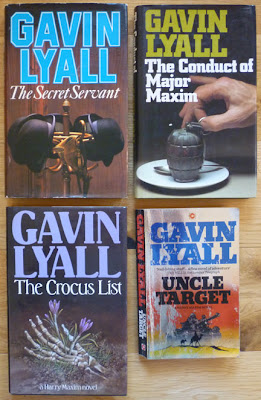