SS-GB by Len Deighton: a Review of a British First Edition (Jonathan Cape, 1978)

Let's embark on another series of themed posts. And the theme this time is the Second World War – or thereabouts. I've got reviews of two novels set in the aftermath of World War II – one by Len Deighton, the other by Ross Thomas – plus a non-fiction account of the early years of WWII, and some additional Ross Thomas business besides.

But let's begin with Len Deighton, and a novel that, while it depicts a post-World War II London, this isn't the city or the era with which we're all familiar... 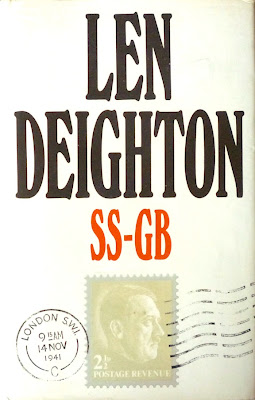 SS-GB was published by Jonathan Cape in the UK in 1978, under an iconic dustjacket designed, of course, by Raymond Hawkey, and featuring a brilliant fake photo on the back cover of SS troops marching down Whitehall. I bought this first edition in Dim and Distant, Heathfield, East Sussex, having seen another first edition in the science fiction exhibition "Out of This World" at the British Library (archivers of this very blog) over the summer. I was already well aware of Deighton's spy novels – indeed I've blogged about them more than once – but SS-GB is a rather different proposition: an alternate history tale set in a 1941 London where Britain has been defeated by Germany.

Written in the third person, our ostensible lead is Detective Superintendent Douglas Archer, a Scotland Yard policeman investigating an apparent murder. It's November 1941, nine months on from Britain's surrender to Hitler's Germany, and a Blitzed-out, fog-bound London is suffering under the yolk of Nazi rule. Archer now reports to General Fritz Kellerman, the SS Gruppenführer in charge of London's police force; it's an uncomfortably collusionary position for Archer to be in – especially as his second-in-command and closest friend, Detective Sergeant Harry Woods, has links to the Resistance – but one he rationalises by reasoning that an occupied Britain still needs law and order. Before long, however, Archer's murder investigation is complicated by the arrival of another SS officer, Standartenführer Oskar Huth, who seconds Archer to a parallel but related hunt for missing atomic bomb blueprints... 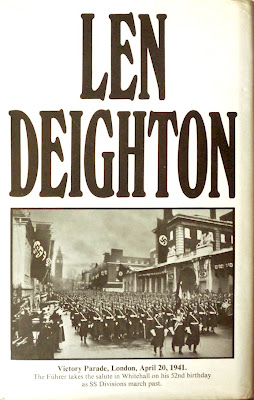 SS-GB wasn't the first novel to conjecture an alternate history where the Nazis won the war; Sarban's The Sound of His Horn and Philip K. Dick's The Man in the High Castle preceded it in, respectively, 1952 and 1962. However, Sarban's tale is a futuristic "what if" set 102 years after World War II, while Dick's novel is set in the year it was published. The closest novel to SS-GB, then, is probably Robert Harris's excellent Fatherland, published fourteen years after Deighton's book in 1992. But although SS-GB shares with Fatherland superficial suspense-cum-crime-thriller trappings, Harris's novel depicts Germany in 1964, whereas Deighton's deals with a scenario both closer to home – at least for me, as a former Londoner – and closer to the conflict itself.

Deighton paints a vivid picture of a London stricken by poverty and starvation, enduring endless checkpoints, mass arrests and summary executions, and afflicted by a gradual, systematic ostracisation and dehumanisation of Jews. That last degradation is only really touched upon, but the glimpses Deighton affords of the plight of the city's Jewish denizens – the enforced wearing of those yellow stars; designated benches in London Zoo – are all the more powerful for their incidental nature. As the Nazis tighten their grip on the country, it's evident Britain is becoming a hellish place, but Deighton doesn't sensationalize this downward spiral; rather, his deadened prose effectively conveys the humdrum but increasingly hopeless existence of Londoners and, by extension, the wider population. 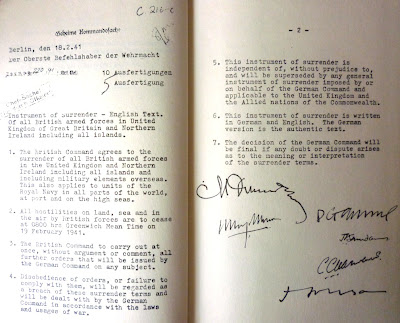 That said, there are sequences of heightened tension, in particular a horrific explosion at the tomb of Karl Marx in Highgate Cemetery and a climactic desperate scramble on the south coast. What misfires there are in the novel are minor; there's some awkward switching of character viewpoints in some scenes, and the decent but dull Douglas Archer isn't a terribly interesting lead. But he's offset by a colourful supporting cast, notably Kellerman and Huth, the latter of whom gets most of the best dialogue and becomes strangely sympathetic towards the end (at least, as sympathetic as an SS officer can be). Deighton is especially good on the internecine low-level warfare between the various branches of the Nazi military and secret police, and Kellerman's and Huth's devious machinations against one another prove deliciously compelling.

SS-GB is terrifyingly plausible, drawing on Deighton's scholarly knowledge of the Second World War and featuring cameos from everyone from Heinrich Himmler to King George VI. One man who doesn't feature, however – except in the briefest of mentions – is the Prime Minister, Winston Churchill. Churchill, though, is the author of the next book I'll be showcasing in this WWII-themed series of posts, with a first edition of a non-fiction work I picked up only yesterday in a Lewes charity shop...
Posted by Nick Jones (Louis XIV, the Sun King) at 05:47