Well this is something of a rarity nowadays: two posts in one day. Wonders will never cease.

This is just a little addendum really to my earlier review of Ross Thomas's 1979 spy/crime thriller The Eighth Dwarf, because during my summer hols I chanced upon a couple of interesting editions of The Eighth Dwarf and its 1978 predecessor, Chinaman's Chance, in a Kings Cross/St. Pancras discount remainder bookshop – both of them published in 2006, both facsimile editions featuring new introductions... 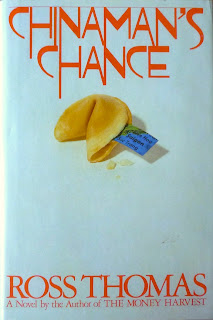 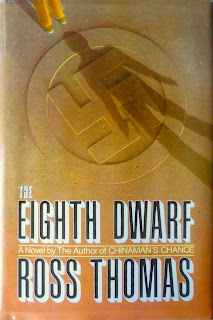 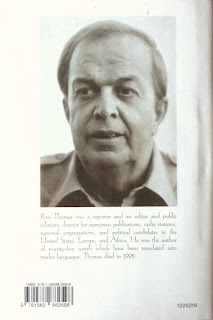 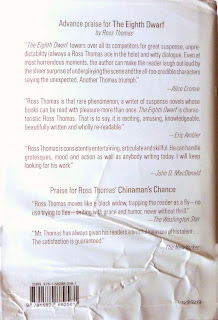 Published by Simon and Schuster for Bookspan in 2006, each of the books faithfully recreates the original '78 and '79 American first editions, from the jacket designs – by Lawrence Ratzkin (Chinaman's Chance) and Fred Marcellino (The Eighth Dwarf) – to the interiors. But there is an additional feature in both: an introduction by novelist Susan Isaacs, reproduced in each book and extolling the virtues of Thomas's writing, calling Chinaman's Chance "delightful" and identifying The Eighth Dwarf as "peak Ross Thomas". I'd certainly go along with those assessments. 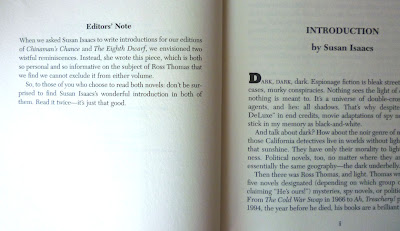 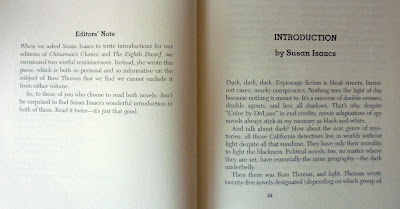 The two books only cost me a few quid, and since I've now read Isaacs's intro – and since I already own first editions of both novels – I'll be setting them free shortly, either by loosing them into the wilds of Lewes' multitudinous charity shops or by donating them to my mum's forthcoming Beckenham Book Fair at the Elm Road Baptist Church on 12 November. Failing that, if anyone wants to take them off my hands and lives locally (i.e., Lewes), feel free to leave a comment, although as you can see, the back of The Eighth Dwarf's jacket is a little battered.

Anyway, the reason I've posted this today rather than tomorrow is because I've got a Notes from the Small Press missive I want to squeeze in before the weekend – a link to a new comic by one of the most important figures in the UK small press scene. And after that... well: it's the end of the world as we know it...
Posted by Nick Jones (Louis XIV, the Sun King) at 09:19