Notes from the Small Press 11: a Review of Illegal Batman in the Moon, a Free Comic Download by Ed Pinsent

It's been a while since I posted one of these Notes from the Small Press mini-comix missives – the last one was all the way back in April, which, quite frankly, is a disgraceful dereliction of duty on my part – but the other day I received an email from a cartoonist who's featured more than once in the series, letting me know that he's just published a brand new comic. And best of all, it's a direct sequel to a terrific small press comic I blogged about in the sixth Notes from the Small Press – and it's completely free!

Illegal Batman in the Moon is British cartoonist Ed Pinsent's belated follow-up to his 1989 Illegal Batman small press comic, and is available as a PDF download from his website. This time out, rather than (sort of) solving crimes, Illegal Batman becomes interested in the writings of the nineteenth-century mathematician and astrologer John Herschel, in particular Herschel's discovery of "bat-like winged humanoids" on the surface of the Moon, as detailed in an 1835 number of the The Edinburgh Journal of Science. Suitably inspired, Illegal Batman determines to establish his own Moon colony of Bat-Men, and enlists the aid of Dr Slice, a recently-released Gotham Jail inmate. Unfortunately, Dr Slice points out that the (falsely attributed to Herschel) article was a hoax, and that, furthermore, splicing the genes of bats and men will take six to eight months to come to fruition. Undeterred, Illegal Batman sets off in his Bat-Rocket to the Moon to search for his mythical "Bat-Folk". 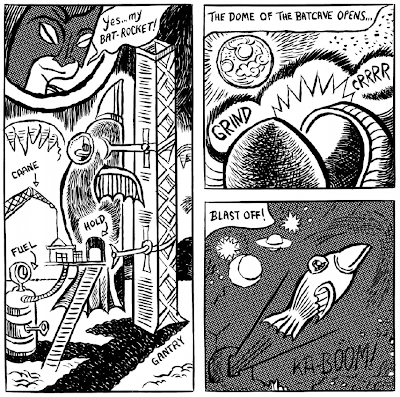 A new comic from Ed Pinsent is always welcome – the more the merrier as far as I'm concerned – and Illegal Batman in the Moon, with its familiar-to-Pinsent-fans leaps of logic and epic flights of fancy, doesn't disappoint. There's something warm and welcoming about Pinsent's work, an essential humanity born of his comics' preoccupation with folklore, myth and dream-states. Illegal Batman in the Moon takes as its starting point an amusing old hoax and extrapolates from that a tale of loneliness, belonging, disillusionment and wonder – with a bit of needlecraft thrown in for good measure. It's simultaneously whimsical, metaphysical and exceedingly silly, with some splendid deadpan panels and jokey asides peppered throughout, not to mention the occasional nod to other Pinsent stories.

Pinsent is a unique and idiosyncratic talent, a prime mover in the influential Fast Fiction small press scene of the 1980s and the creator of a number of memorable characters, notably Windy Wilberforce and the extraordinary Primitif. He's made a selection of his work available as downloads on his website – well worth an hour or so of anyone's time – and his site is also a treasure trove of information about the '80s and '90s British scene, with a gallery of Fast Fiction magazine (of which Ed was an editor and regular contributor to) cover scans, complete with tables of contents for each issue; extensive small press galleries; overseas small press galleries; and more besides. But as wonderful and essential as all that stuff is, it's especially lovely to have a new comic from Ed, and Illegal Batman in the Moon is as poetic, peculiar, pulchritudinous and puzzling as anything he's done.

You can download Illegal Batman in the Moon here; Ed has hinted to me that there may be more new comics to follow, so make sure you check back regularly to his website. And if you're interested in delving further into the British small press scene, just follow these links to previous Notes from the Small Press posts:

Coming up next on Existential Ennui, well, it's the bimonthly Lewes Book Fair tomorrow (Saturday 8 October), so if I find anything interesting at that, I'll let you know. Failing that, though, next week I'll be embarking on a series of posts on post-apocalyptic fiction. There'll be books familiar, unfamiliar and unexpected, all accompanied by some splendid cover art. And doubtless there'll be the odd Donald E. Westlake/Violent World of Parker cross-post mixed in too. T'riffic.
Posted by Nick Jones (Louis XIV, the Sun King) at 04:33