The Eighth Dwarf by Ross Thomas: a Review (Simon and Schuster / Hamish Hamilton, 1979)

From a factual – if idiosyncratic and self-serving – account of the early years of World War II, to a decidedly fictional take on the year following the end of the conflict, written by an American author who's now a firm favourite here on Existential Ennui: 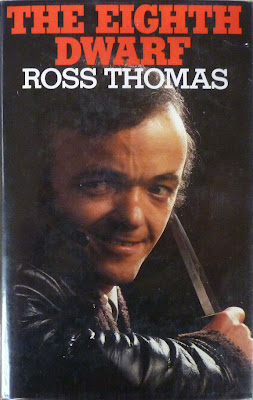 Ross Thomas's The Eighth Dwarf was first published in hardback in 1979 by Simon & Schuster in the US and Hamish Hamilton in the UK, the Beverley le Barrow-designed dustjacket of which you can see above. Following hot on the heels of the brilliant Chinaman's Chance (1978), it features yet another of Thomas's in-it-for-the-money antiheroes, this time in the shape of Minor Jackson, an ex-OSS operative now out to make a fast buck any way he can. Mid-thirties, prematurely greyed and currently residing in California, Minor enters into an uneasy partnership with a Romanian dwarf named Nicolae Ploscaru in order to locate the son of a German Jewish expat, Kurt Oppenheimer – for a substantial fee. Trouble is, Oppenheimer has become a one-man killing machine, and is currently hunting Nazi war criminals across Germany.

The year is 1946, and moves are afoot in the States for a new intelligence agency. One of the architects of this new agency is Robert Henry Orr, Jackson's former OSS boss; Orr is also interested in Oppenheimer's uniquely murderous talents, so he assists Minor in getting to Germany. But America isn't the only nation keen to capture young Kurt: the Brits are also sniffing around him, in the shape of Major Gilbert Baker-Bates, and the Russians have sent an emissary into Germany too, an ex-concentration camp inmate named Bodden. As each of these parties zeroes in on the seemingly unhinged Oppenheimer, the bodies start piling up, and the chances of Minor escaping with his skin intact, let alone with any money, become increasingly remote.

As with all of the Ross Thomas novels I've read thus far, The Eighth Dwarf's strength lies in its cast of colourful characters, although in this instance it's the supporting players who really stand out. Minor himself is suitably insouciant, but although Thomas sketches in some background for him – notably a disapproving father – there's little to him beyond his nonchalant attitude. Much more interesting are the wry, practical Bodden, the exasperated Lieutenant Meyer, who's tasked with keeping tabs on Jackson, and Kurt Oppenheimer, whose psychosis builds throughout the book. And then there's Ploscaru, or "the wicked dwarf" as he's known in the intelligence community. Ploscaru remains a remote figure throughout, but with his devious, untrustworthy nature and animal cunning, he shines whenever he makes an appearance.

Mind you, all of that's not to disparage the plot, which, while not as Byzantine as others of Thomas's books, still ducks and weaves effectively, ratcheting up the tension as the net closes in on Oppenheimer. The denouement is satisfyingly ironic too, featuring an international auction (of all things) which neatly punctures the whole enterprise. There's also room for a sequel, but unlike Chinaman's Chance, which warranted two follow-up novels, The Eighth Dwarf was destined never to be developed further, although Minor Jackson and Nicolae Ploscaru do warrant a mention in Thomas's final novel, 1994's Ah, Treachery!

Speaking of Chinaman's Chance, I've got one last post to come in this short World War II-themed series – a Ross Thomas bonus post in which I'll be taking a look at both Chinaman's Chance and The Eighth Dwarf, in two intriguing interconnected later editions...
Posted by Nick Jones (Louis XIV, the Sun King) at 05:30