Steering away from the signed editions for the moment, having posted a lengthy, self-serving introduction on The Violent World of Parker on Monday (and a link to said introduction here on Existential Ennui that same day), I've begun my posts proper over there with a Westlake Score – i.e., a post in which I detail a Donald E. Westlake book I've bought recently (in this case on eBay, for a pittance) – which, as I threatened I might do, I'm also posting over 'ere. Two posts for the price of one! (Confused? Yeah, me too, but I'm sure we'll all get the hang of it.) And the book in question is a curious beast indeed: 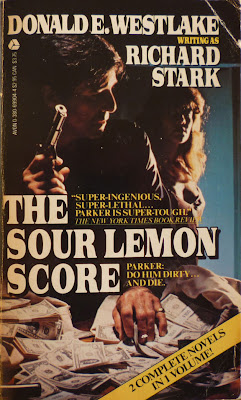 In the years before the University of Chicago Press began reissuing the Richard Stark novels, yer average Parker fan had to subsist on a diet of often-elusive, frequently tatty editions of the books, almost all of which fell out of print in the 1980s. The last publisher to take a good run at the novels in the States prior to Chicago was Avon Books, who, from 1984–85, issued all sixteen of the initial run of Parkers as mass market paperbacks. For many – especially in the pre-internet age, and particularly with the later books in the original series – these were the only available way to read the Parker stories, and though these days their gaudy (but surprisingly elaborate) photo covers elicit scorn from some quarters, Avon should be given full credit for publishing the entire run (whether they did so in the correct order, however, I'm unsure of).

Sadly, despite much fruitless Googling, I've been unable to determine who the photographer was on Avon's covers, although it's interesting to note the slight shift in style roundabout the halfway mark of Avon's run, where said snapper switched from shots of a partially silhouetted Parker against a cityscape to shots of a more distinct (and strangely young-Burt Lancaster-like, although still seemingly the same model) Parker and a blonde moll. Violent World of Parker supremo Trent's currently missing a few Avon covers from his otherwise excellent cover galleries (which can be found from the dedicated page for each novel), so it's not so easy to spot that... but as it happens, I'm in a position to help out there – a small "thanks for bringing me on board" gift, if you will. I'll return to that in a moment.

First, though, I wanted to spend a minute or two on the Avon book I won on eBay. Because it's not one novel we're talking about here: it's two. On one side of this June 1985 paperback is The Sour Lemon Score, the twelfth Parker novel, the cover of which you can see up top there. But flip the book over and upside down, and you get this: 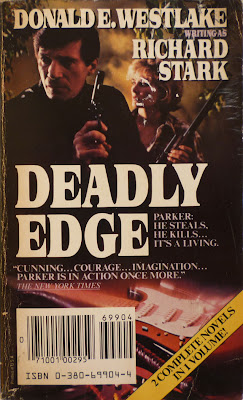 Deadly Edge, the thirteenth Parker novel. To my knowledge this is the only instance of Avon combining two Parker novels in one, and I'm perplexed as to why they chose these two. There's no real link between them, other than their series proximity – a better coupling might have been The Sour Lemon Score and Plunder Squad (Parker #15), or Slayground (Parker #14) and Butcher's Moon (Parker #16) – so I'm baffled as to Avon's reasoning. The only explanation I can come up with is they were in a hurry to get the books out, although the final two books in the Avon run, Plunder Squad and Butcher's Moon, weren't published as a double. If anyone can shed any light on this matter – or indeed on the identity of the mysterious cover photographer – feel free to leave a comment either here or on the parallel post on The Violent World of Parker.

One final thing: in common with others of the Avon editions, there's an introductory excerpt from each novel on the first page of either end of the book. The one for The Sour Lemon Score bears the unremarkable heading "Out for the Count", but Avon's copywriter must've either been listening to Diana Ross or feeling particularly soppy on the day he/she came up with the heading for Deadly Edge: 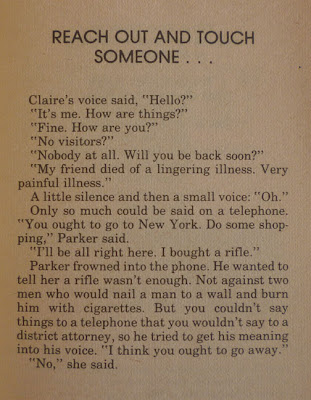 Anyway, back to Trent's cover galleries. In the course of what I laughingly refer to as my research for this post, I turned up a few Avon covers that aren't currently in the galleries. So feast your eyes on this little-seen lot, my friends, and I'll be back before too long with the second Anthony Price signed edition, and some exciting news about another author interview... 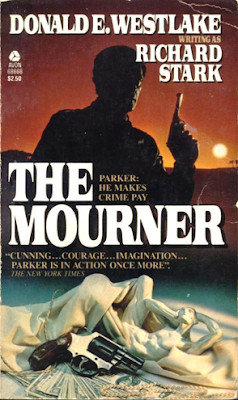