An Announcement: Up to My Neck in The Violent World of Parker 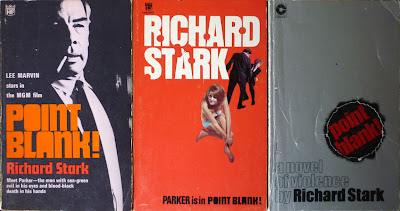 So then. If you followed the link at the end of the previous post (on those Anthony Price signed editions), you'll know that, henceforth, as well as blogging on Existential Ennui, I'll also be blogging on the brilliant Violent World of Parker website, which is the site for all things Donald E. Westlake/Richard Stark. This rather exciting turn of events has been in the works for a short while now, with email communications zinging back and forth between myself and Trent, the man behind The Violent World (you might recall my having hinted at it in this post), but the long and the short of it is, Trent invited me to be co-blogger on The Violent World, and I readily accepted.

Longtime readers of Existential Ennui will know the high regard in which I hold the work of Donald E. Westlake/Richard Stark, so to be asked to contribute on a regular basis to the preeminent Westlake/Stark/Parker site is a rare honour indeed; I can't even begin to calculate the number of times I've linked to Trent's amazing website, and my gratitude to him for affording me this opportunity is boundless. I've just posted a typically wordy missive over there laying out what it will all entail, so go read that if you want to find out more. But I just wanted to add here that it doesn't mean the end of Existential Ennui (much as many would wish that were so), nor indeed the end of Westlake-related posting over here. I'll be cross-posting a lot of the things I write for Violent World – or at least throwing up a link to those posts – and I'll still be beavering away on my other abiding concerns here on Existential Ennui (starting with that series of signed editions I mentioned). It's a positive move for this blog – and hopefully a positive move for The Violent World of Parker, too – and I strongly suspect it'll result in increased levels of traffic over here.

Anyway: onwards. Next up, the first of those signed editions – which, in keeping with the recent theme, will be an Anthony Price novel – and the first of my posts proper for The Violent World of Parker!
Posted by Nick Jones (Louis XIV, the Sun King) at 05:42