The '44 Vintage by Anthony Price: A Signed US First Edition (Doubleday, 1978)

After yesterday's announcement about my additional blogging duties on The Violent World of Parker website, let's return to British spy novelist Anthony Price, with the first of two signed editions of Price's books that I picked up prior to meeting the man himself (at which meeting he kindly inscribed a few of my first editions), and which in turn kicks off a run of posts on a variety of other signed books I've acquired over the past month or two. 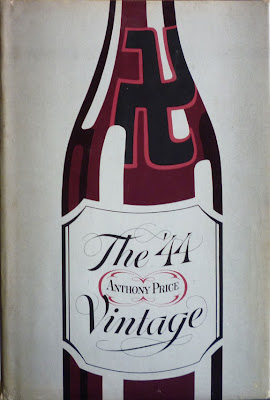 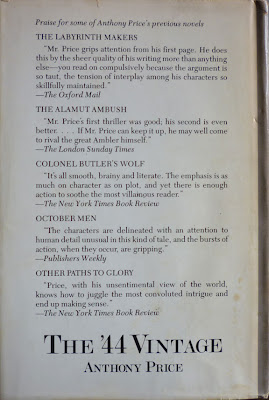 This is the US hardback first edition of The '44 Vintage, published by The Crime Club/Doubleday in 1978 (also published that same year in the UK by Victor Gollancz). The dustjacket was designed by Al Nagy, here employing a restricted palette in a screenprint style which I believe was typical of his work. Anthony Price mentioned at the end of the second part of my interview with him that Doubleday's jackets for his novels ranged "from the awful to the quite good", and Nagy's design, I'd suggest, falls firmly into the latter camp.

I haven't got this far in the David Audley series yet – The '44 Vintage is the eighth book, following 1976's War Game – but Price did state in part two of my interview that the writing of the novel was one of the more enjoyable experiences of his career, depicting, as it does, the young Audley's adventures in France after the Normandy beach landings, a subject Price was keen to explore. You can read the Doubleday jacket flap blurb to the right there (click on the image to enlarge) if you want to learn more about the plot, but as this is a series of posts on signed editions, we'd best move on to the crux of the matter, namely this, on the book's front endpaper: 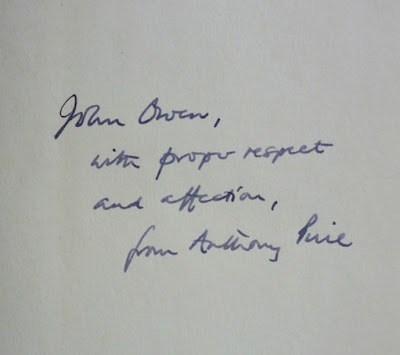 I can't quite make out the surname of the person Price has dedicated the book to – "Brown", maybe – but the "with proper respect and affection" suggests John was a friend or colleague of Price's (I guess I should have asked Mr. Price when I met him). I bought this copy on Amazon Marketplace, and it was something of a blind buy; it was listed merely as a signed book, with no mention of edition. But it was only £7.99, so I took a punt, and was pleasantly surprised when it turned out to be an American first edition (and first printing) in very good condition. Curiously, the seller was a Christian bookshop in Essex. God knows – possibly literally – how they ended up with it, but considering there's only one other signed edition currently listed on AbeBooks – a 1983 paperback going for just shy of fifty quid – I'm certainly not about to start questioning the Lord's mysterious way.

Let's move on to the second Anthony Price signed edition I have to show you – one which, oddly enough, is also the next book in the David Audley series – plus a bit of business concerning Mr. Price and Kim Philby. Although now that I've begun blogging on The Violent World of Parker site, there may well be a Westlake Score before we get to that...
Posted by Nick Jones (Louis XIV, the Sun King) at 07:01