Tomorrow's Ghost by Anthony Price: A Signed UK First Edition; plus a Kim Philby Connection from The Spectator

I tell you what: this cross-posting on Existential Ennui and The Violent World of Parker has the potential to become terribly confusing, even to me. I've only just started posting over there and already I'm getting mixed up as to which blog I'm supposed to be updating on which day. And on top of that, not only will there be interruptions to my only-just-begun series on signed editions here on Existential Ennui, as I cross-post my Westlake/Stark missives in-between the ones about signed books, but I'm having to bring forward by a week the other author interview I've been hinting about, in order to fit in with said author's publisher's plans. I think my brain's going to explode.

I'll reveal more about that interview at the end of this post, but let's return to British spy thriller writer Anthony Price one last time (for now), with the second of two signed editions I nabbed prior to interviewing Mr. Price – plus a fascinating bit of business concerning Kim Philby. And after Tuesday's post on the eighth book in Price's David Audley series, The '44 Vintage, here we have the ninth book: 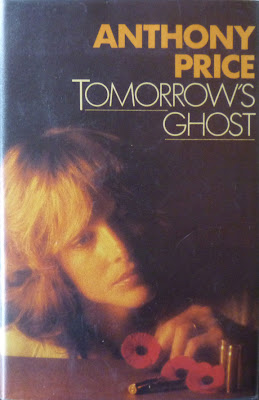 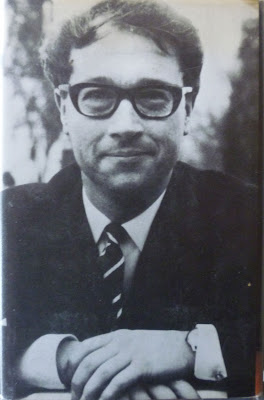 Tomorrow's Ghost was published in hardback by Victor Gollancz in the UK in 1979. This is the novel that Mr. Price ever-so-slightly spoiled in the second part of my interview with him by revealing the fate of the story's lead character, Frances Fitzgibbon. I guess I should have thrown a "spoiler alert" in the interview, but while that might have been beneficial for you lot, it wouldn't have kept the surprise from me, as I've yet to read Tomorrow's Ghost. Let me, then, refer you to the jacket flaps for further information on the book:

The jacket front photograph is by Oliver Hatch, who provided the cover photographs for a run of Price's novels around this period (there's another from my collection on the right there). Hatch also did a lot of work for the British publisher J. M. Dent in the 1980s, including the cover for the 1987 paperback of crime novelist Simon Brett's Dead Romantic and the cover for the 1982 first edition of saucy UK comedian Frankie Howerd's Trumps (presumably getting to meet the great man in the process). But we're not here to discuss cover design, are we? (Well, not exclusively.) We're here because this is a signed edition, so let's have a look at that John Hancock, on the book's front endpaper: 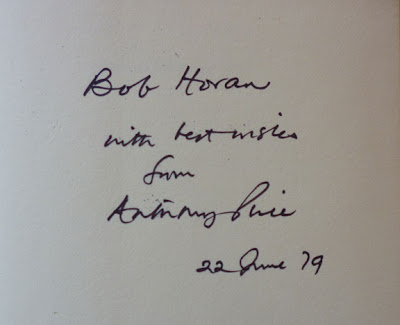 As with the signed edition of The '44 Vintage, I have no idea who Bob Horan is, but as I now have a number of signed Price books, I can confirm the dedication is genuine. This copy of Tomorrow's Ghost came from Amazon Marketplace, and cost me a bit more than The '44 Vintage – about twenty quid – but unsigned Gollancz first editions of the book (not ex-library copies) go for at least thirty, so it was still a good deal. And there's only one other signed edition of the novel currently listed on AbeBooks – a 1980 Futura paperback – and that's going for almost fifty quid.

Before we leave Anthony Price for the moment, I just wanted to draw your attention to this recent article in The Spectator – which, coincidentally, Book Glutton has also linked to (Jeremy Duns also spotted it) – which concerns a cache of newly discovered letters written by the Soviet spy Kim Philby. The letters date from the mid-1980s, twenty years after Philby defected, when he was living in Moscow. A voracious reader, Philby was barred from accessing English-language books through the British Council or via Moscow libraries, but he was able to order books through the post, from Bowes & Bowes in Cambridge. The letters detail those orders and thus shed light on Philby's reading habits during this period. Book Glutton had the same response to the list of books as I did, noting the twelve Patricia Highsmith novels Philby ordered... and the single Anthony Price. I'm intrigued by that single Price novel; if it was a new book, I imagine it would have been either Sion Crossing (1984), Here Be Monsters (1985) or For the Good of the State (1986). If the article's author, Jeffrey Meyers, ever chances across this post, I'd love to know which it was.

I'll be returning with more signed editions later next week, but before then, as mentioned at the start of this post, I have another exclusive interview for you – rather shorter this time, and also quite amusing for the way in which my questions got garbled – with the author of a hugely successful series of novels – and their equally successful attendant spin-off TV series – both of which centre on an affable serial killer. And I'll be revealing the identity of that author (and character) in the next post, with a review of his most recent novel...
Posted by Nick Jones (Louis XIV, the Sun King) at 06:53