It's the final post in this run on British suspense fiction writer P. M. Hubbard – although not, I should point out, the final Hubbard post altogether; I'll have more on him at a future date. For the latecomers among us, this week I've been blogging about books from either end of Hubbard's sixteen-year career; I began with an introduction to his work here, then posted a review of his 1965 intense crazed-collector novel, A Hive of Glass, here, followed that up with a look at his final novel, 1979's Kill Claudio, here, and then blogged about what might just be his debut novel, 1963's Anna Highbury, here.

For our grand finale, we stay in the year 1963 for a review of one of the author's short stories. Hubbard didn't have that many short stories published in his lifetime – just fourteen have been identified, nearly half of which appeared in The Magazine of Fantasy and Science Fiction in the 1950s and '60s. And it's from F&SF that this story comes, nestling alongside tales from L. Sprague de Camp and Fritz Leiber. 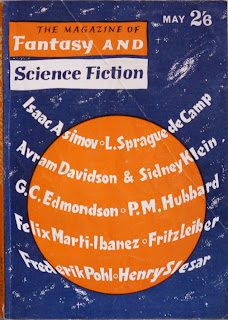 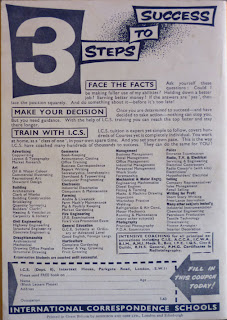 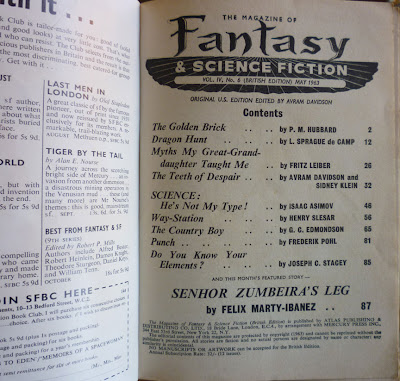 This is the Vol. IV, No. 6, May 1963 British edition of The Magazine of Fantasy and Science Fiction, published by Atlas Publishing. As you can see from the contents page, Hubbard's story, "The Golden Brick", was the lead tale in that issue. Now, if you were to check the most authoritative Hubbard source on the internet, Mystery*File's compilation of pieces by Tom Jenkins and Wyatt James, you would note that in their bibliography at the bottom of that post, "The Golden Brick" – which was Hubbard's fourth published short – is listed as being in the January 1963 issue of F&SF rather than the May issue. But their information isn't incorrect. Y'see, British editions of the US genre mags around this time tended to reprint stories a few months after their debuts in the American editions. Which means that, for those of us in the UK attempting to tracks down particular stories from SF magazines (which I have been doing recently – more on that in a moment), it's never as straightforward a task as that might seem, as the numbers and dates don't correspond to whatever online sources there are.

Anyway, I did, obviously, manage to get hold of this issue, and Hubbard's story is an unsettling piece of short fiction. An unnamed narrator is holidaying with his family in the Cornish fishing village of Penharrow. While his brood are off exploring inland, our protagonist decides to take a dinghy out "to potter round into a neighboring cove and, if the sun was hot enough, risk a quick swim". But as he heads out of the harbour, a ketch – a medium-size sailing boat with two masts – hoves into view and pulls alongside. Its captain is a curiously colourless man dressed in black, who enquires, "Do you want to buy a golden brick?" At first our hero is disbelieving, but then the man goes down below and reappears holding a gold bar, which he suggests could be taken ashore and sold, and the profits split between them.

After asking why the man can't simply go ashore and sell it himself – "Can't leave the ship, not just at present" – the two agree to meet on Monday to split the proceeds, and go their separate ways. Once the golden brick is sold, our narrator returns to the agreed meeting point out at sea... and there events take a nightmarish turn, as it becomes clear the man in black is keeping something hideous in his hold... 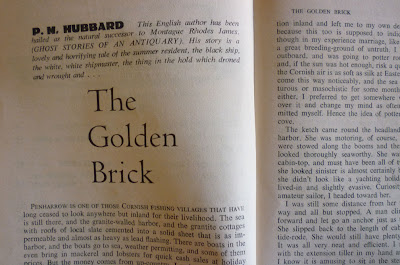 Although there's more of a supernatural element to the ten-page story than in Hubbard's long-form fare, "The Golden Brick" is still recognizably the work of the same writer responsible for A Hive of Glass. Its narrator is on the surface an average family man, but there are hints of Hubbard's standard self-centred antihero within him; at one point he dispenses this pearl of wisdom to us: "in my experience marriage, like other restrictive practices, is a great breeding-ground of untruth". Even so, our unnamed narrator pales in comparison to what lurks in the hold of the ketch, an ancient, dry, scuttling horror which finally escapes as the doomed black-clad captain and his boat meet their fate. It's a ghoulish ending to an effective little chiller that lingers long in the memory.

As it happens, there's something of a tale behind my acquisition of this copy of F&SF too. Over the past month or so I've been hoovering up '60s science fiction magazines off eBay (and elsewhere), many of them from the same seller – one SoggyPee, alias Mick, whose eBay shop can be found here. I'd had this May issue of F&SF on my watch list, but then completely forgot to bid on it before the auction ended. Buggeration. Luckily no one else had bid on it either, and having bought a fair few other items from Mick, I emailed him and asked if he might be relisting it at some point. I heard nothing back, but a couple of days later a package turned up in the post, inside which was the magazine, along with a note saying "please accept this magazine with my compliments". Which was a thoroughly decent thing to do. So thank you, Mick. You're a scholar and a gent.

Anyway, that's all from P. M. Hubbard for the moment... but what were the other SF mags I mentioned I'd bought? Ah, well some of those will form the basis of the next run of posts, because I'll be staying with the '60s SF mags for a wee while yet. Hopefully over the weekend I'll be posting something on a 1962 issue of Amazing Fact and Science Fiction, which boasts stories by three towering names in the SF field. (If the Lewes Book Fair, which takes place on Saturday, turns up anything vitally interesting, that may change. But I'll be writing about that for local magazine Viva Lewes anyway, so probably not.) And then after that I'll be reviewing stories from a range of early-'60s SF periodicals, all of them written by that firm favourite of Existential Ennui's, Donald E. "Richard Stark" Westlake, many of which have never been reprinted since. Oh, and if all goes according to plan, there'll be at least one other post from me next week on a blog other than this one, again on Westlake/Stark. Should be an interesting week...
Posted by Nick Jones (Louis XIV, the Sun King) at 05:59