If you've just joined us, this week's posts are all on largely overlooked British suspense novelist P. M. Hubbard, whose intense, psychological mysteries and crime stories draw on an unusual feel for the rural and feature deeply flawed antiheroes as their protagonists. In this run of posts I'm focussing on stories from either end of his career; yesterday I reviewed one of his earliest and very best novels, 1965's A Hive of Glass, and today I'm looking at a UK first edition of his eighteenth and final novel: 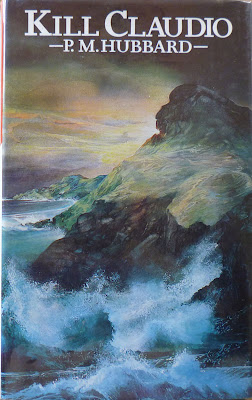 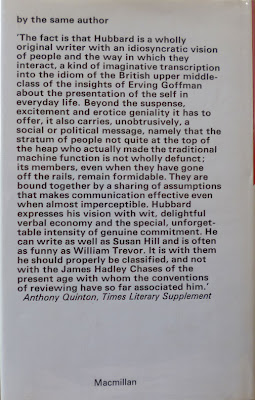 Kill Claudio was published in hardback by Macmillan in 1979, seven months prior to Hubbard's death in March 1980. It's the first-person account of one Ben Selby, who, whilst out shooting one day discovers the body of a man in the heather. The corpse is identified by the police as a Mr. Mowbray, but on reflection Selby realises it is, in fact, Peter Gaston, a former colleague of his from the Establishment, an informal network of spies-cum-thieves. Visiting Mowbray/Gaston's widow, Lisa, Selby determines the intended victim may actually have been he himself. After asking Selby to kill Gaston's murderer – whom Selby names Claudio, alluding to a similar request in Much Ado About Nothing – Lisa hands him a letter from the dead man, concerning his and Ben's and a "C.T."'s final mission with the Establishment twenty years ago – a job which ended with a shipwreck and the burying by Gaston of a box containing something very valuable indeed...

It's curious that both Hubbard's final novel and his first (or at least, what's reckoned to be his first – more on that in a bit), 1963's Flush as May, seemingly both begin with the discovery of a body during a walk – an unintended symmetry there. And though there were no more books to come from Hubbard, at least he ended on a high: critic and Hubbard aficionado Wyatt James described Kill Claudio as "a fine example of the British hunter-and-hunted-theme", while in 2000 H. R. F. Keating and Mike Ripley picked the novel as one of their 101 crime novels of the twentieth century – Hubbard's only entry on that list.

In common with all of Hubbard's books, there isn't a plentiful supply of good condition UK first editions of Kill Claudio online, despite it being his most recent novel; at time of writing AbeBooks has just three listed from British booksellers, all of which are ex-library, and only eleven copies worldwide. Mine was a lucky eBay find, and is in fine condition. The splendid illustration of crashing waves on a rugged coastline (very Hubbard) on the front of the dustjacket is by Barbara Lofthouse, whose painterly work can generally be seen on and in children's and fantasy titles; she created the covers for the second and third volumes of Chaz Brenchley's The Books of Outremer, for example.

And from Hubbard's final novel, we turn to his first – or rather, what may be his first – pun intended...
Posted by Nick Jones (Louis XIV, the Sun King) at 05:18