I mentioned on Friday that I might be able to squeeze in a weekend post on one of those 1960s science fiction magazines I've been hoovering up recently – ahead of the ones with the Donald E. Westlake stories in that I'll be blogging about next week – and so I am. Doing. Have. Done. Whatever. 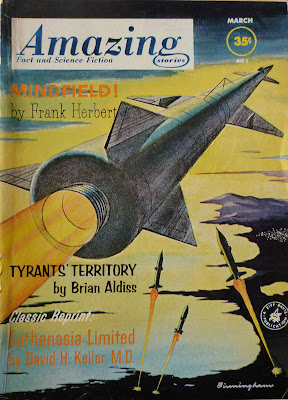 This is Vol. 36, No. 3 of Amazing Stories, published in the US in March 1962 by Ziff-Davis, with a front cover by Lloyd Birmingham. I spotted this copy whilst lurking on eBay keeping an eye on the aforementioned Mick SoggyPee's various Westlake-story-containing SF mags; this issue of Amazing was one of the other SF mags he had on offer, and I was struck by the quality of the contributors in the table of contents. (Mick always includes a scan of the contents of an issue in his listings, which is particularly handy for British editions of genre magazines, where the contents tend to lag behind the American editions by a few months.) Take a look-see, as you Americans might say: 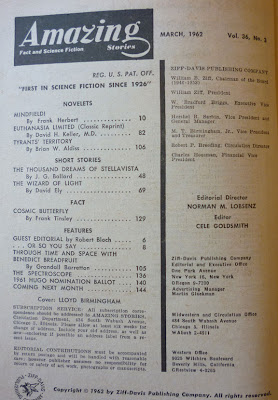 You've got one novelet (or, to use the more familiar spelling, novelette – basically a story that's longer than a short but shorter than a novella) each from Frank Herbert and Brian W. Aldiss, plus a guest editorial by Robert Bloch, and a generous helping of drawings from one of the finest artists ever to contribute to SF magazines, Virgil Finlay. I've come across Finlay's work before – a few years back I edited a book in which he featured (Sci-Fi Art: A Graphic History – now available as a rather splendid book-and-magnet set, retitled Sci-Fi Art: A Pocket History) – but his elegant illustrations on the back cover and inside this issue of Amazing are... well... quite simply, amazing: 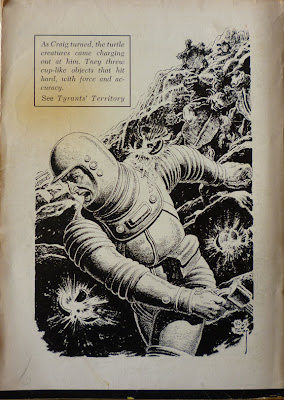 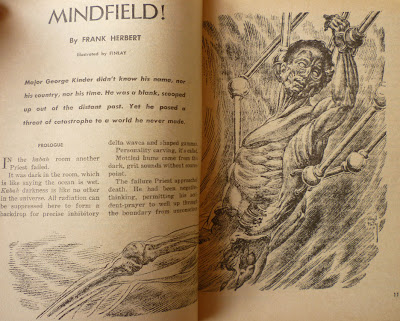 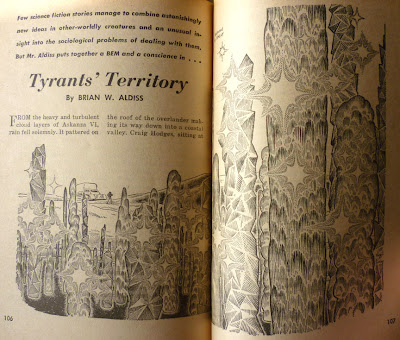 The real prize in this issue, though, is a story which doesn't even get a mention on the cover – and which again boasts a couple of beautiful Virgil Finlay illos: 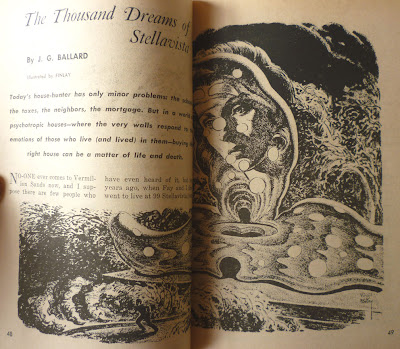 J. G. Ballard's "The Thousand Dreams of Stellavista" is perhaps the best-known of his stories set in the futuristic resort of Vermilion Sands (all of which were gathered together in 1971 in the Vermilion Sands collection). It's narrated by Howard Talbot, a lawyer who has come to Vermilion Sands with his wife, Fay, while he opens an office in nearby Red Beach. Howard and Fay move into a house on Stellavista, one of the resort's PT, or psychotropic, domains, which are made of a bioplastic which shifts and reforms according to the residents' mood. But they aren't the first inhabitants of the house... and the former occupants, movie star Gloria Tremayne and her husband, architect Miles Vanden Starr – who was murdered by Tremayne while he slept – have left something of an impression on the place. And Howard was one of the lawyers for the defence at Tremayne's trial...

The notion of a home that alters its design according to the occupant's mood is an intriguing idea; Ballard uses it to explore concerns such as how technology impacts and reshapes humanity, and how a bored, well-fed middle class increasingly turns to novelty. And, as with Concrete Island, at the close of the story the narrator even comes to embrace his strange surroundings, finding a kind of peace there, despite – or perhaps because of – the trauma experienced within it.

I'll be featuring another Ballard science fiction story from an even more scarce SF magazine fairly soon – a longer tale which is in effect the first edition of what would become one of his most famous novels. But next on Existential Ennui, it's those Westlake SF stories...
Posted by Nick Jones (Louis XIV, the Sun King) at 05:18