Just a quick note before we get to the meat of this post: I've got another post up on the Ilex Press blog, tangentially related to this Existential Ennui series of posts on the early 1960s Donald E. Westlake science fiction magazine short stories. It's about Steve Holland's recently-published Sci-Fi Art: A Pocket History, so go have a read, why don'tcha. And while you're there, if you haven't already, take a gander at my first post, on Richard Stark's The Hunter, as featured in Ilex's 500 Essential Cult Books.

Plug out of the way, let's have a look at the penultimate Westlake SF short I have for you this week – and just for a change it's a story which has been reprinted since – in the 1989 collection Tomorrow's Crimes. So you can, if you feel so inclined, read the damn thing without having to hunt for a copy of this: 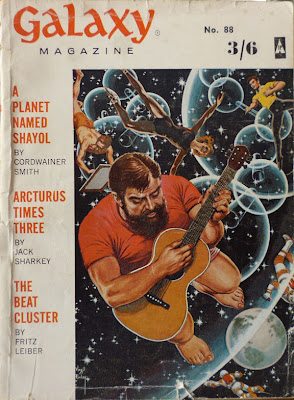 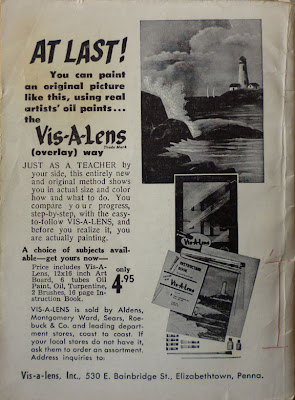 Galaxy Vol. 20, No. 1, published by Galaxy Publishing Corporation in October 1961. You'll note from the price in the top right corner of the cover that this is the British edition, but unlike some of the other SF mags around this period, Galaxy's UK and US monthly pub dates were exactly the same – possibly because the UK editions were printed and published by the American publisher – with only the cover price changed – and then shipped over to Britain. Once again the table of contents is stuffed with marquee names: 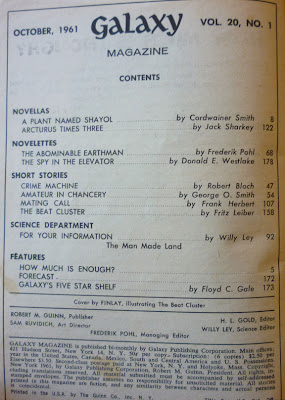 Frederick Pohl, Frank Herbert, Fritz Leiber... not bad at all. And as with that issue of Amazing Stories I blogged about on Sunday, there are some fine Virgil Finlay illustrations too, especially this one, decorating Cordwainer Smith's "A Planet Named Shayol": 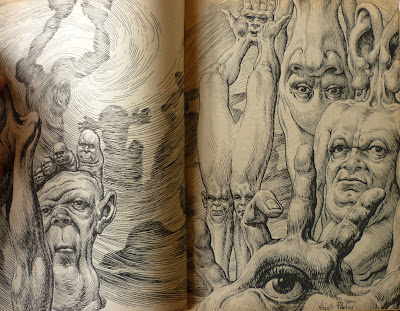 Wow. The cover is by Finlay as well, but Westlake's story is illustrated by a "West" (no first name). "The Spy in the Elevator" posits a future where the remnants of humanity live in "Projects", 200-stories-high towers, each independent of the other, separated by irradiated wasteland. Our narrator is an ordinary Joe, Edmund Rice. Edmund is planning on proposing to his girlfriend on the 140th floor, Linda, to enter into Non-P marriage – "Non-Permanent, No Progeny". Rehearsing his lines as he waits for the elevator – "Darling, I can't live without you at the moment. Temporarily I'm in love with you. I want to share my life with you for a while. Will you be provisionally mine?" – he's disturbed to find the elevator doesn't seem to be working – something which is unheard of. Rushing back to his apartment, he calls a Transit Staff receptionist... and is told that there's a spy in the elevator. 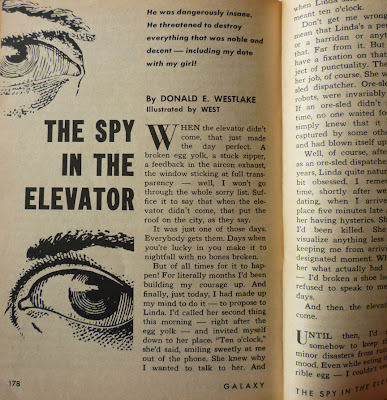 Deciding to take the stairs instead – again, practically unheard of – Edmund is surprised when the spy emerges from an elevator shaft emergency entrance, brandishing a gun. The spy divulges that he is not, in fact, a spy, merely an inhabitant of another Project eighty miles north... and that he travelled to Edmund's Project on foot, across a landscape that was supposedly rendered untraversable after World War III. And what's more, the non-spy reckons that life is returning to the outside world...

In true science fiction fashion – think Soylent Green or Ray Bradbury's short stories – Westlake rounds the tale off with a payoff which neatly deflates any expectations we might have built up throughout preceding events. The notion of hermetically sealed habitations, cut off from each other and fed by fear, rumour and supposition, obviously takes its cue from the Cold War – as does the idea of a spy from a foreign "power". But Westlake does more with the scenario than one would expect, filtering in little details about the society that's developed within the tower block – a transient, mindless way of life, with the Project's population controlled by the Army, unquestioning and obedient.

That said, as with "Man of Action", there's a lightness of touch to the tale, again presaging the crime caper novels Westlake would soon be writing. But the final story I'll be looking at in this run of posts – which I'll have up over the weekend – opts for a rather different approach: an attempt at a realistic and at-the-time plausible vision of space exploration. And, unusually for Westlake's SF shorts, it's the featured story on the cover of the magazine in which it appears...
Posted by Nick Jones (Louis XIV, the Sun King) at 06:20