After that brief Richard Stark/Parker/500 Essential Cult Books interruption yesterday, let's continue this series of posts on the short stories cult crime fiction author Donald E. "Richard Stark" Westlake wrote for sundry science fiction magazines in the early '60s – introductory preamble here, first story from May 1960 here. And today I have for you another (never-reprinted) tale from 1960... or at least, in America it was published in 1960 – December, to be precise. Here in the UK, though, it didn't appear until the following year – neatly demonstrating how British publishers of US SF mags tended to lag behind their American counterparts by some months. Anyway, the magazine in which it appears is this: 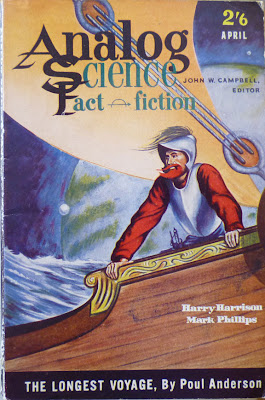 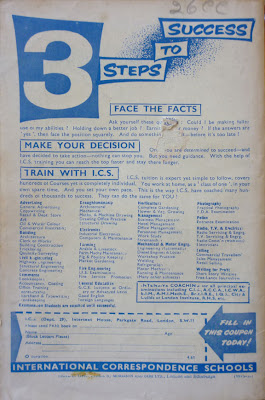 Analog Vol. XVII, No. 4 was published in the UK by Atlas in April 1961, four months after the US edition. It boasts a sterling line-up of SF stalwarts: Poul Anderson and Harry Harrison both have novelets in it, and editor John W. Campbell clocks in with a feature on the Echo I communications satellite: 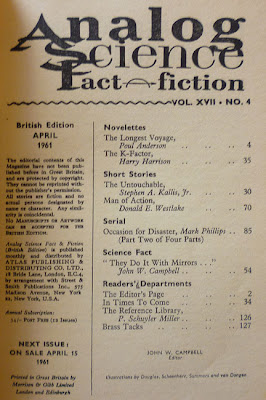 The illustrators are pretty strong too; the cover is by the amazing John Schoenherr – quite an early example of his cover art – and his chiaroscuro linework also graces Anderson's story. (Schoenherr is one of the featured artists in the aforementioned Sci-Fi Art: A Pocket History, which I edited.) I also rather like Leo Summers's work on Harrison's story; I've not come across him before, but his drawing is quite elegant. 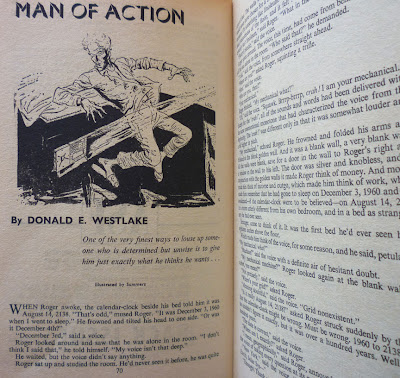 Westlake's story, "Man of Action", is also illustrated by Summers, the artist doing his best with a tale that's set almost entirely in one room. We barely leave the confines of the featureless, golden-walled apartment in which our protagonist, Roger, finds himself in a New York of the future (except to visit the next room along, which is exactly the same), having gone to sleep in his own house in 1960. As Roger awakes and wonders aloud why the calendar clock by the bed is showing August 14, 2138 instead of December 3, 1960 – "or was it December 4th?" – a disembodied mechanical voice replies: "December 3rd". Roger, it transpires, has been brought to the future to answer a question. Trouble is, he has to guess what that question might be. So begins a battle of wits between Roger and the voice, as Roger tries to get to the bottom of his mysterious time trip. 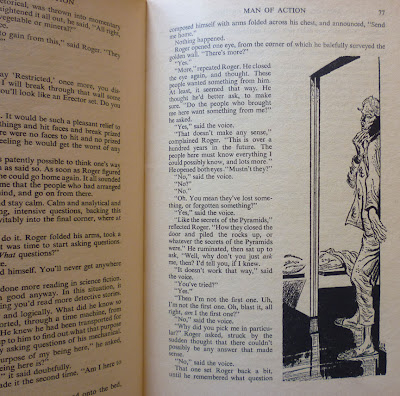 The answer, when it eventually comes, isn't terribly surprising, although it does make sense – certainly more so than the baffling "Travelers Far and Wee" – and there's a nice punchline involving Soviet leader Nikita Khrushchev. But what's most interesting about the story is the way the Q&A session between Roger and the voice – with its misunderstandings and logical cul-de-sacs – prefigures the elliptical conversations between Dortmunder and Kelp in Westlake's later series of crime caper novels beginning with 1970's The Hot Rock. The mechanical voice in "Man of Action" has a frustrating habit of taking everything Roger says literally, which is precisely the problem Dortmunder encounters with Kelp and others of his hapless associates. So again, it seems Westlake was trying out a stylistic approach which would play into his later books.

One thing I've noticed with these early Westlake SF stories is they often work up to some kind of payoff. That's common in science fiction shorts – Ray Bradbury famously deployed the tactic in his peerless short stories, although in his case the endings were much more powerful and gut-wrenching. Westlake usually opts for a more comedic punchline – although tinged with a dark irony – and the next story I'll be looking at, also from 1961, does the same thing again...

(And if you can't bear to wait until tomorrow for more of my searing science fiction insight, I've got another SF-themed post up over on the Ilex Press blog. Go have a look, why doncha?)
Posted by Nick Jones (Louis XIV, the Sun King) at 05:34