So then. After yesterday's preamble on cult crime fiction author Donald E. Westlake and the science fiction short stories he wrote for various publications – with its attendant bibliography – it's time to take a look at some of the earliest examples I've managed to get my ever-grubby mitts on. And we'll start with this: 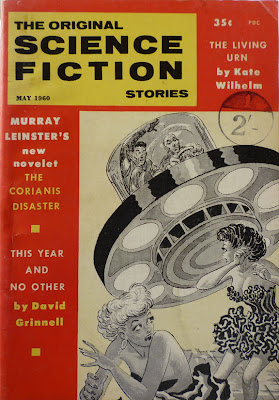 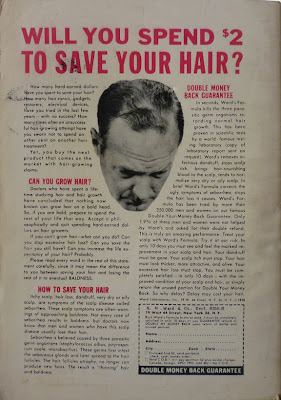 The is Volume 11, No. 2 of The Original Science Fiction Stories, published by Columbia Publications Inc. in May 1960 (cover art uncredited – nice hair loss advert on the back there; some things never change...). As you'll see from the table of contents: 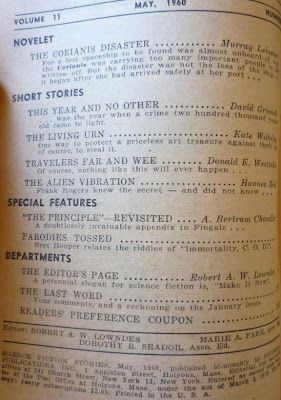 the line-up of storytellers in this issue is pretty solid. The lead novelet is by Murray Leinster, alias William Fitgerald Jenkins, a mainstay of the pulpy SF mags who penned well over a thousand short stories, while bringing up the rear are well-regarded science fiction names like David Grinnell – alias Donald A. Wollheim – and Hannes Bok, a.k.a. Wayne Woodward (pseudonyms all the way, it seems), who is better known for his splendid artwork than his writing.

Westlake's story clocks in at just four pages, and it's a real curiosity. Indeed, I must profess a certain level of bewilderment at it. I've read it and re-read it in the vain hope that I might have missed something first time round, but I'm still baffled. Ordinarily I try and avoid too many spoilers when reviewing stuff on Existential Ennui – or at least throw in a spoiler alert – but with "Travelers Far and Wee" by necessity I'll be revealing the ending because it's so perplexing it bends the rest of the story completely out of shape. 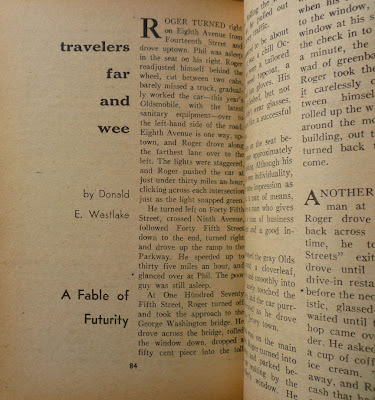 Told in the third-person, the story follows Roger and Phil, two apparently successful executive types driving round New York in an Oldsmobile. They cruise round the streets, stopping at a drive-through bank, then a drive-in restaurant, where Roger orders a hamburger while Phil slumbers in the passenger seat, and then carry on their merry way. At around 5pm Phil wakes, and whilst stationary at a stop light the two swap positions, clambering over each other so that when the light turns green, it's Phil who's in the driving seat. As they continue driving round seemingly aimlessly, Roger mentions he cashed another check earlier. "How much do we have left?" asks Phil. "I don't know," replies Roger: "Millions."

A couple of times Roger and Phil discuss the situation on the roads. Waving at the traffic around them, Phil ponders, "I wonder how many of them are like us." Replies Roger with a shrug: "More every day I suppose." As the story meanders towards its conclusion, with a faint smile Phil muses, "Do you suppose we'll ever be able to get out of the car?" But Roger doesn't answer: he's fallen asleep.

And that's yer lot. It is, as I say, all rather puzzling. Now, there is one clue to Westlake's intent at the start of the tale. The Oldsmobile is described as this year's model "with the latest sanitary equipment", which suggests the vaguely futuristic notion that vehicles have been modified so that occupants no longer need to leave them. But that doesn't explain why Roger and Phil can't escape the car. Is it because they can't find a parking space? Possibly, although the issue of parking is never raised. Are they too overweight to get out? Westlake's portrayal of them would suggest not. Does the "millions" they mention denote some kind of Faustian pact? Who knows.

I guess the point is that Westlake is leaving it up to us to wonder why Roger and Phil are stuck in their car, but the trouble is he doesn't give us enough clues or furnish us with enough information to make that a satisfactory approach. Although, having said that, out of all the Westlake SF shorts I've read thus far, this is the one I've ruminated over the most. So maybe Westlake wins after all. Whatever the case, "Travelers Far and Wee" is told in that light, airy, whimsical manner that would become so familiar with, say, the Dortmunder stories – a style that wouldn't show itself in his novels until 1965's The Fugitive Pigeon. And in its matter-of-fact descriptions of New York's layout, it prefigures the Parker novels (written, of course, as Richard Stark), especially 1962's The Hunter.

"Travelers Far and Wee" has never been reprinted, so you'll have to track down a copy of The Original Science Fiction Stories to read it yourself. And neither, for that matter, has the next short story I'll be looking at, which also hails from 1960 – although the edition of the magazine in which it appears I have is the British one, which didn't make it onto the racks in the UK until April 1961. Before we get to that, though – there's this.
Posted by Nick Jones (Louis XIV, the Sun King) at 07:30