This second of two Kingsley Amis books I'm showcasing in swift succession is also the third book about booze that Amis wrote, so the acquisition of it completes my set of Amis alcoholic first editions: 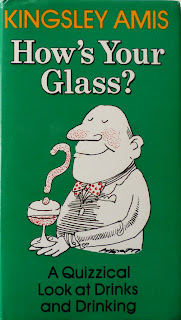 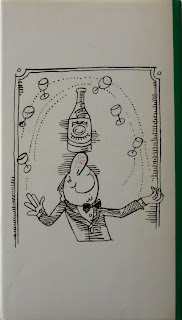 How's Your Glass? was published in hardback in the UK by Weidenfeld & Nicolson in 1984. It is, essentially, a quiz book, comprising a series of quizzes on wine ("Elementary", "Advanced", "France", "Germany", etc.), beer, spirits, cocktails and so forth, with a short introduction to each section. Interspersed throughout are cartoons by Michael Heath, whose work has appeared in every major British newspaper and who has been cartoon editor of The Spectator since 1991 – he won a lifetime achievement award at the Cartoon Art Trust Awards in 2009. (The Heath cartoon-adorned dustjacket was designed by Gerry Downes.) 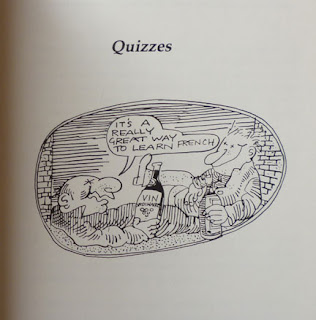 It is, as I say, the third of Amis's books on drink, the first being 1972's On Drink – which I done blogged about here – and the second being 1983's Every Day Drinking – which I done blogged about here. All three were collected together as Everyday Drinking by Bloomsbury in 2008. I bought this copy of How's Your Glass? at the recent Lewes Book Fair; I hadn't intended to get myself a copy of it, for reasons I'll outline in a moment, but the book fair was pretty disappointing from my perspective, and there was little else there I wanted to buy, so when I saw this for three quid, I figured, what the hell: nothing worse than coming away from a fair empty handed. 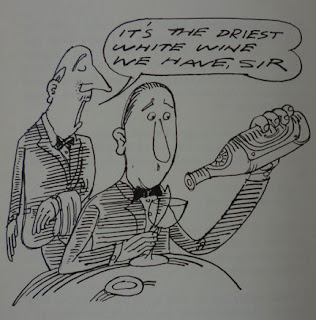 For me, How's Your Glass? is the least interesting of the three Amis alcohol volumes: I'm not terribly keen on quizzes, and if I absolutely had to pick a subject for a quiz, drinking would not be top of my list. But there's still much to enjoy about the book, particularly Amis's acerbic introductions to each section, which are as barbed as you'd expect. "It was in the early 1950s that vodka began its amazing progress to popularity in the Western world, " he writes at the start of the vodka questions, "doubly amazing when you consider what a dull drink it is, no good neat, unsuitable for cocktails." 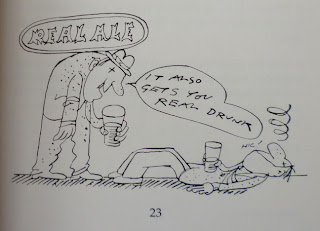 The questions themselves are elegantly phrased and often pleasingly open-ended; the first one under "Alcohol and Your Interior" runs thus: "'Winter warmers' are a recognized category of drink, but does alcohol warm you? – it certainly makes you feel warm. Elucidate." So while How's Your Glass? is a slim, slight volume, it does possess a certain charm. And more importantly – at least from my crazed collector vantage point – it completes, as I mentioned at the top of this post, my set of sozzled Amis firsts:

Right then. What's next? Well, I still haven't been able to get my grubby mitts on the book I keep hinting about; the review of that mysterious tome will have to wait until I do. No matter though, because, excitingly, next week Existential Ennui will once again be exclusively devoted to political/crime/thriller writer Ross Thomas. I'll have a number of very scarce UK first editions (one of them sporting a dustjacket by our dear friend Beverley le Barrow), a review of perhaps Thomas's most ambitious novel, and a cover gallery or two as well. And if you're really lucky, Ross Thomas Week, Mark III (I'm including Bleeck Week in that count) will begin over the weekend...
Posted by Nick Jones (Louis XIV, the Sun King) at 06:10