For this tenth instalment in my mini-comix archaeology series Notes from the Small Press – links to the previous nine posts in the series at the end of this one – I thought I'd take a look at some of the small press comics produced by Bob Lynch in the 1980s. Lynch is another of those British cartoonists linked to the Fast Fiction scene of the '80s and '90s; his self-produced comics could be found for sale on the Fast Fiction table at the Westminster Comic Mart, and he also contributed regularly to the Fast Fiction anthology – not to mention other anthologies like Harley Richardson's Ugly Mug.

Indeed it was in Fast Fiction issue #18, February 1986, where I believe I first saw Bob Lynch's work (Fast Fiction editor Ed Pinsent's website seems to suggest that Lynch's strips started appearing as early as #16, but unfortunately my Fast Fiction collection has a few gaps in it) – on the cover for a start, which you can see on the right there, but also in a story inside titled "Behold the Hamster". Lynch's confident, cartoony strip stood out even in such esteemed company as Glenn Dakin, Steve Way and the aforementioned Mr. Pinsent; a lot of that was to do with how the other creators in that issue were of a similar sensibility – what we'd recognise today as "art comix", for want of a better term – whereas Lynch employed a bold, Brit humour-comics style. But it was also the way Lynch launched you into a fully-realised, hermetically sealed madcap world, boasting characters and plots he'd clearly been developing for a while.

"Behold the Hamster" was in fact only the first part of a four-part story which continued through issues #19, #20 and #22 of Fast Fiction (#21 featured a standalone Lynch tale about a chemically mutated "rhymic" slug named Samantha), and starred Lynch's regular lead Sav Sadness. Sav is a kind of everyman who lives in a world where giant robots, space travel and bizarre scientific experiments exist alongside suburban mundanity, and where household appliances can talk and have names. In a recap at the start of the strip, we learn that Sav and his wife Juline's son, Dim, was bitten by a radioactive scientist, swelling Dim's brain "until his intellect was twice the power of Einstein's", before he eventually went supernova and became a nebula cloud floating above the city. Meanwhile, back in the present day, a rogue scientist resurrects a recently deceased hamster – called Helen, of course – into the body of which Dim's nebulous mind gets transplanted by lightning. 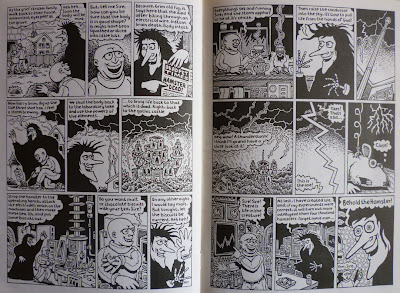 All of which will give you some idea of the lunatic nature of Lynch's storylines. There's more to them than mere craziness, however; there's a self-awareness that runs though everything Lynch does, manifesting in a meta approach where characters are often cognizant of starring in a comic – breaking the fourth wall to address the reader or comment on events in adjacent panels – either preceding or following. In the second episode of "Behold the Hamster", Helen/Dim even reads the previous issue of Fast Fiction to find out how she/he ended up in this situation (thus providing a handy recap into the bargain). 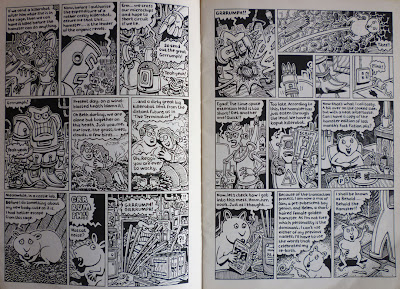 Lynch's cartooning perhaps reached its apotheosis in one of his full-length A4 comics, Sav Sadness in: Sadness in Space (1988). He'd self-published another similar-length A5 comic before this one – The Whirlpool of Disaster, subsequently revised and repackaged in an A4 edition in 1989 – but Sadness in Space saw him at the height of his powers. The story begins with Sav's appliances – Ronny the Radio, Sharon the Shower, etc. – rebelling over Sav's idle existence, before a confluence of coincidences sends our hero into space, where he gets mixed up in an Alien pastiche involving an extraterrestrial glove puppet. It's a gloriously sustained piece of nonsense, stuffed full of terrible jokes and logic-defying non sequiturs, and remains as fresh and energetic today as it was twenty years ago. 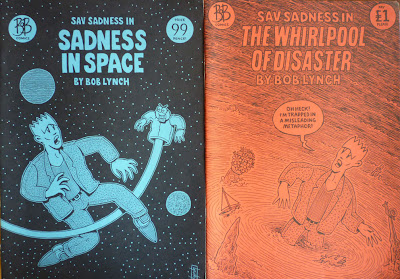 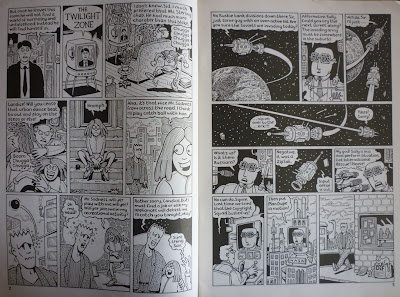 Lynch quit making comics sometime in the 1990s; I don't know what he's up to these days but he does have a Flickr photostream containing all manner of photographs and doodles. It also includes the complete Sadness in Space and Behold the Hamster stories, as well as what looks like all of his other comics work, too. So rather than simply poring over my badly reproduced excerpts, you can go and read the full comics yourself – something I'd obviously heartily recommend. When so much of the work from that vibrant and under-appreciated '80s/'90s era of British small press comics-making is seemingly lost forever, it's nice that, for a change, an important small press comics creator has all of his material available online. And you never know: if enough people visit his photostream, perhaps Bob Lynch might be inclined to produce some new comics. Here's hoping. 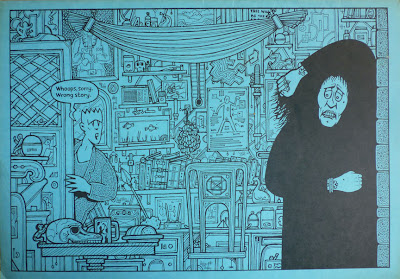 Notes from the Small Press 9: Some Gristavision Comics by Merv Grist
Posted by Nick Jones (Louis XIV, the Sun King) at 07:33