It can't have escaped your attention that there's a right royal wedding taking place today, but let me reassure you that this post has nothing to do with the union between Kate and Wills... Except, if you're really desperate for a tenuous link, that with an estimated two billion watching the event on telly around the world, it could be said the (now-married, in fact) couple have become a highly successful British export... and the author I'm blogging about today was also, in his day, a highly successful British export. (No? Oh well, please yourself.)

That author is Gavin Lyall, a UK thriller writer who I've covered numerous times on this 'ere blog, most recently in a review of his 1964 sophomore novel The Most Dangerous Game. And it's to that same Scandinavia-set aviation actioner I'm returning today, in an edition that actually predates the British first I wrote about in that previous post. How can it possibly predate the British first, I hear you cry? Well let's find out. 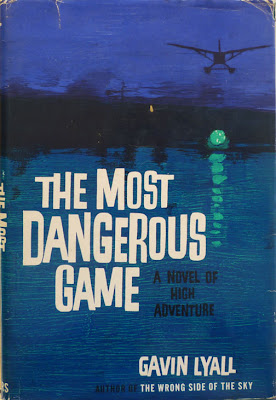 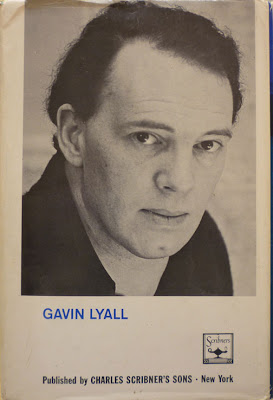 This is the American first edition of The Most Dangerous Game, published in hardback by Charles Scribner's Sons in 1963 – a year before the UK first edition. Indeed, if we take a look at the copyright page:

We can be even more precise about the publication date. See the "A-9.63 [H]"? The "A" denotes a first printing, as was standard with Scribner's books around this period, while the "9.63" denotes the month and year – in other words, September 1963 (not sure what the "H" denotes, though). So this US first edition/first printing was published before the '64 Hodder & Stoughton UK first. As to how that came to be the case, during this initial phase of his career Lyall was, as I mentioned up top, very successful overseas, especially in America, where his debut novel, The Wrong Side of the Sky, did so well for Scribner's that they managed to secure first world publication rights to his second – i.e. The Most Dangerous Game. Thus this American Scribner's edition is in effect the true first of the novel.

I bought this copy in Camilla's secondhand bookshop in Eastbourne (hence the "Eastbourne Buy" in the post title), during my birthday day out last month – just one of a pile of books I bought that day (all of which I will eventually blog about, you lucky, lucky bastards). I'd seen it there before but decided against buying it on the previous trip because I wanted a UK first – not realising what I now know about the US being the true first. But on this occasion I couldn't resist it; quite apart from anything else I really like that moody blue dustjacket, which was designed (read: illustrated) by William Berry, a Texan artist who worked as an illustrator and painter in New York in the 1960s. And it is, after all, a cracking novel – pop along to my other post on it if you want to read what I made of it.

So then, what shall we have next in this series of random book blogging posts? Excellent question. Hmm. Y'know, I really have no idea what I'll be posting next. Ooh, tell you what we haven't had for a while, though: a Notes from the Small Press. Let's see if I can't rustle one of those up for the weekend...
Posted by Nick Jones (Louis XIV, the Sun King) at 06:53