Something a little different today... 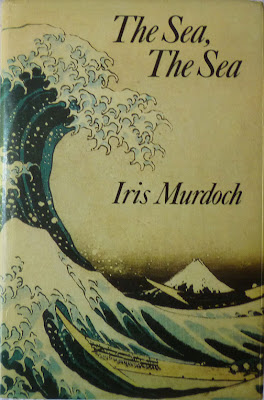 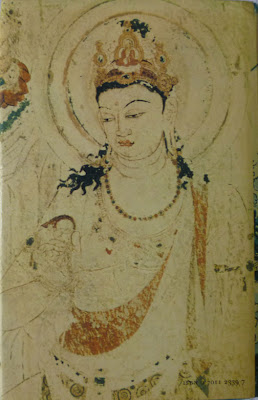 This is the UK hardback first edition of Iris Murdoch's nineteenth and perhaps most famous novel, The Sea, the Sea, published by Chatto & Windus in 1978. I say "perhaps most famous" because in a career that included such well-known works as Under the Net (1954) and The Bell (1958), The Sea, the Sea is the novel that finally won Murdoch the Booker Prize, in 1978. It's a story about obsession and the use and surrender of magical power, as a theatre director, over sixty and a bachelor, goes to live in a lonely house beside the sea, a house which appears to be haunted... The dustjacket boasts two details from works of art; on the front is a detail from Hokusai's The hollow of the deep-sea wave off Kanagawa, and on the back is a detail from a wall painting in the Golden Hall of the Horyu-ji, Nara, Japan.

The fact that The Sea, the Sea won the Booker makes it one of the more collectible of Murdoch's books, but while there is a ready supply of first editions on AbeBooks, crucially, most of those are second or third impressions (no doubt reprinted at the time due to demand from the Booker-curious) – even if their listings don't state as much (I'm betting a query to the sellers concerned would confirm that in most cases). True firsts, i.e. first editions and first impressions – with a jacket, and not ex-library – are rather thinner on the ground: a copy from a UK seller would set you back around £125-£150. 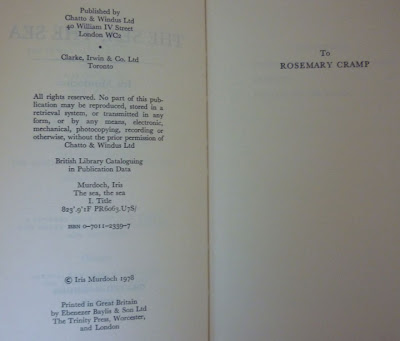 Now, ordinarily, at this juncture I might be inclined to disclose how much I paid for a particular book. But I shan't be revealing how much I paid for this first edition of The Sea, the Sea, as in this instance that would be particularly vulgar. Reason being, it's a present, for Rachel, whose birthday it is today. The Sea, the Sea, you see, is Rachel's favourite Iris Murdoch novel, and possibly one of her most favourite novels of all time. So by the time Rachel reads this post, she'll be clutching a true first edition of the book in her hands.

All of which leaves only one thing left to say: