So, the random book blogging that's been going on round these here parts for the past week – basically playing catch-up on assorted unrelated books I've bought over the last month or three (with a Notes from the Small Press throw in for a bit of variety) – will take a turn for the slightly less random this week. I'll still be catching up on stuff I've purchased, but these books will be slightly more linked – largely by author name, but also by dustjacket designer. Three of 'em were written by Len Deighton, and all three of those books boast jackets designed by Raymond Hawkey; and the other three were written by a certain Mr. Higgins... although not, as we shall see, the same Mr. Higgins...

That said, while this first post does indeed deal with two novels written by two different men named Higgins, in an odd coincidence both books feature dustjackets created by the same designer... and both were bought in the same charity shop... 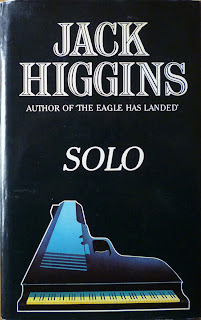 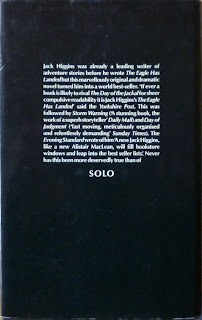 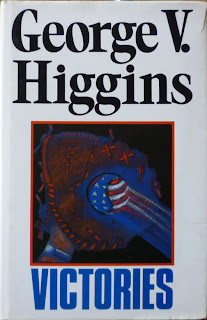 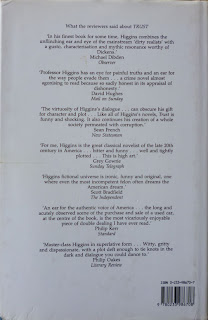 What we have here are British hardback first editions of Solo by Jack Higgins – published by William Collins in 1980 – and Victories by George V. Higgins, which was published by Andre Deutsch in 1991. I picked these two books up in the south London town of Sydenham, on the same excursion a few months back when I bought Len Deighton's Twinkle, Twinkle, Little Spy and Mark Gatiss's Black Butterfly. And despite being published over ten years apart and presumably (although not necessarily) arriving at the charity shop from different donors, both books are wrapped in dustjackets designed by Donald – or Don, as Victories has it – Macpherson. I haven't been able to find out much about him, but his illustrations appeared on at least three other Jack Higgins covers – 1981's Luciano's Luck, 1982's Touch the Devil and 1985's Confessional (those last two starring Liam Devlin from perhaps Higgins's most famous novel, The Eagle Has Landed) – as well as on the cover of Derek Lambert's The Judas Code (Hamilton, 1983) and, in the form of maps, inside the UK first edition of Paul Theroux's The Kingdom by the Sea (also Hamilton, 1983).

Jack Higgins – real name Harry Patterson – hasn't cropped up on Existential Ennui before, but he is an author I've been meaning to try at some point, so unless and until a first edition of The Eagle Has Landed turns up in my immediate vicinity, Solo strikes me as a good a place to start as any. Mind you, the plot sounds slightly bizarre. It features a concert pianist named Mikali who also happens to be a ruthless assassin. Fleeing from the police after murdering a prominent Zionist, Mikali runs over and kills a young girl – who just happens to be the daughter of Asa Morgan, a colonel in Northern Ireland and something of an efficient killer himself. As the dustjacket flap blurb puts it (offering its own unique spin on a well-known paradox): "When an irresistible force meets an immovable object, trouble usually ensues. When Mikali met Asa Morgan there could only be one solution. Death."

George V. Higgins, on the other hand, has appeared on this blog before, although I must admit I still haven't read the book I blogged about back then: his debut – and best-known – novel, The Friends of Eddie Coyle. Victories is a companion novel to his 1989 book Trust, and is a political tale set in Vermont in 1968. I'm not sure I'll get round to reading it anytime soon – for one thing I've got The Friends of Eddie Coyle to get through first – but this contemporaneous New York Times review is pretty positive. And it's to George V. that we return in the next post, with another politically inclined novel from rather earlier in his career...
Posted by Nick Jones (Louis XIV, the Sun King) at 06:35