Continuing this random offering of posts on books I've either had hanging around for a while or ones I simply fancied blogging about – and after yesterday's slight birthday detour – here's a novel I bought because it's the first book in a trilogy, and I picked up the third book in the series in a Sydenham charity shop earlier in the year... 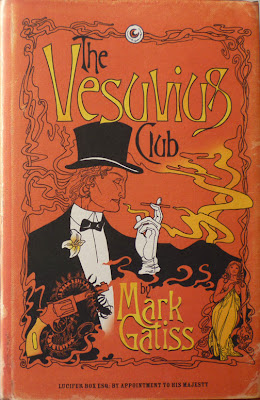 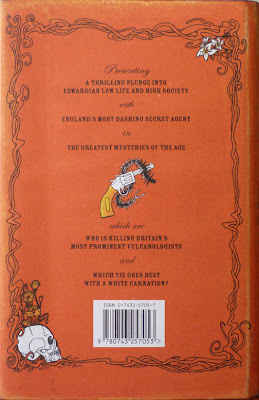 This is the 2004 Simon & Schuster hardback first edition and first printing of Mark Gatiss's The Vesuvius Club. It's the first of League of Gentlemen/Doctor Who/Sherlock writer/actor/producer Gatiss's three books starring lascivious secret service agent Lucifer Box. Each book is set in a distinct historical period: book two, The Devil in Amber (2006) is set just after World War I, while book three, Black Butterfly (2008), is set in the 1950s; I blogged about Black Butterfly back in March and outlined the themes of the series then. As to The Vesuvius Club, let's have a look at the dustjacket flap blurb to see what this one's all about: 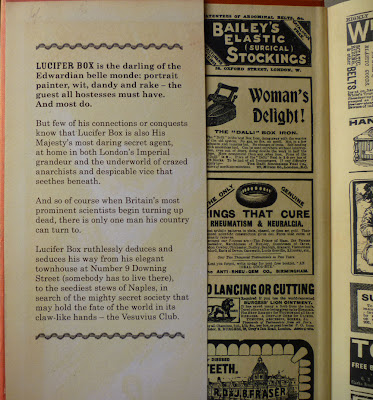 As well as detailing the plot, you'll start to get a sense from that glance at the jacket and endpapers of the excellent design of the book. For, as in the case of Black Butterfly, the various designers and illustrators – and indeed stray Doctor Who aficionados – involved in the look of this first edition of The Vesuvius Club have really gone to town. The jacket was designed by the Simon & Schuster's in-house team and David Mann, but the illustration is by Ian Bass, from a concept by former Doctor Who Magazine editor Clayton Hickman. (Hickman and Gatiss were both active in Doctor Who fandom before they became involved in the show in a professional capacity – as indeed were current and former showrunners Steven Moffatt and Russell T. Davies.) A number of other Bass illustrations pepper the book's interior, too: 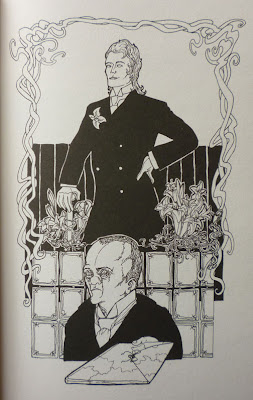 Incidentally, Bass and Gatiss also created a graphic novel version of The Vesuvius Club, which was published in 2005. But back to the leering appreciation of the first edition of the novel: the orange arlin case replicates Bass's front cover illustration in a black deboss, while the endpapers, as we've already glimpsed, reproduce Edwardian era adverts (in a similar fashion to issue six of Alan Moore and Kevin O'Neill's original League of Extraordinary Gentlemen comic book series, from 1999): 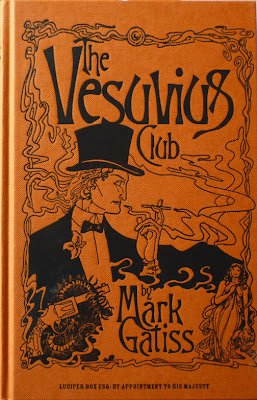 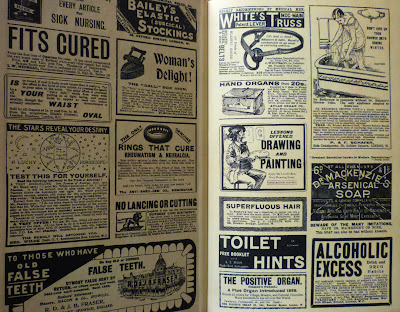 It is, like Black Butterfly, a thoroughly lovely book to gaze at and handle (and hopefully to read; I've yet to start it), and all involved are to be applauded for going the extra mile in its design, particularly in this day and age, when the overall look of novels – ends, case, etc. – has, as I've lamented previously, become something of an afterthought.

Oh, and there's one last thing to note about this particular copy of The Vesuvius Club: 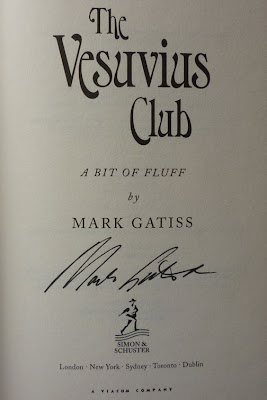 It's signed on the title page. Splendid.

Next on Existential Ennui: a Westlake Score... and a Lewes Book Bargain...
Posted by Nick Jones (Louis XIV, the Sun King) at 04:43