It's Bank Holiday Monday here in the UK, which means it's a holiday for most folk (I guess the clue's in the name there). But I couldn't very well leave you with nothing to read but the weekend's Doctor Who novelisation post, now could I? So, to kick off a run of what will be for the foreseeable future a reasonably random selection of posts – whatever comes to hand or takes my fancy, basically, although it's a safe bet many of the books will be of a crime or espionage bent – let's have a look at a book I bought in the Lewes Antique Centre, down on Cliffe High Street: 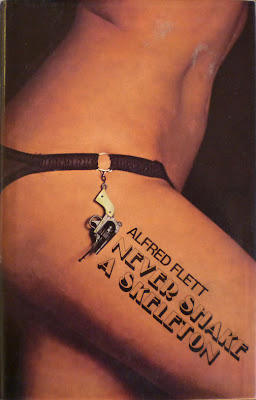 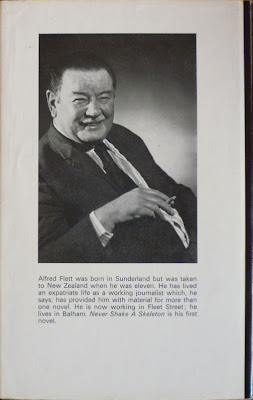 Never Shake a Skeleton by Alfred Flett was published in hardback in the UK by Michael Joseph in 1973. It's the story of an operative for the Establishment, "Freeman", who's led by a beautiful blonde to, as the jacket flap copy has it, "believe he could win a war. But he found, to his horror, that his own side played rougher than the wartime enemy. He tried again—thirty years later. This was his second error. He shook some skeletons. And 'Freeman' found, once more, that his own side were the toughest antagonists of them all..."

I think I get a vague sense of the story from that blurb; it seems to encompass espionage elements, which was part of the reason I bought it. But not the whole reason. I was also curious about Alfred Flett, who, as the back cover author bio notes, was a journalist (and presumably carried on as such after Never Shake a Skeleton was published; there was no second novel for him), which made me wonder if he was any relation to the former Observer journo Kathryn Flett. He almost certainly wasn't her father – her dad's name is Doug, I believe – but might he be related some other way?

But it was spying (hey!) the credit for the cover photograph that made me decide to plonk down the (meagre amount of) cash in the end. Because, once again, it was taken by Beverley le Barrow – here spelt with no third "e" in his first name – a.k.a. Sun newspaper Page 3 snapper Beverley Goodway. I last blogged about Beverley a couple of weeks ago during Ross Thomas Week, Mark III, but as is now traditional I'll direct you to this post for a summary of all my previous missives on him. Interestingly, Never Shake a Skeleton wasn't the only first edition on the shelves of the Lewes Antique Centre which sported a Le Barrow dustjacket; there were a couple of '70s John Creasey novels with cover photos by Beverley, too. Seems Mr. Le Barrow was even busier during the 1970s than I figured...