Rounding off this short series of posts on crime fiction writer Richard Price, and picking up the thread from yesterday's post on the Maze Prison Library copy of Price's 1992 novel Clockers, let's take a look at the other edition of Clockers I mentioned I'd bought: 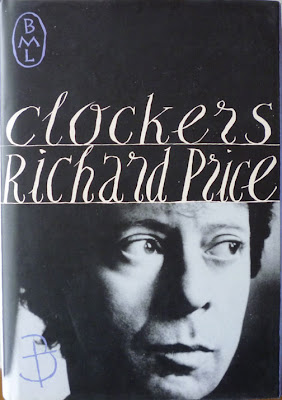 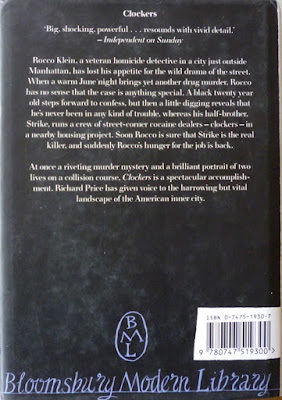 This is the second UK hardback edition of Clockers, published by Bloomsbury in 1994, two years after their first edition. It's a much more compact book – still over 500 pages long, but just 73/4" tall as opposed to the first edition's breeze-block-esque 93/4" – so it's a more enticing prospect as regards actually reading the bloody thing. It was published as part of Bloomsbury's 1994 Modern Library initiative, which saw novels by, among others, Scott Turow (The Burden of Proof and Presumed Innocent), Joanna Trollope (The Rector's Wife and A Passionate Man) and Margaret Atwood (Cat's Eye) reissued in hardback with dustjackets sporting a photograph of the author on the front (the one on the cover of Clockers was taken by Ralph Gibson). All of the jackets in the series were designed by illustrator Jeff Fisher, who also designed the cover for Captain Corelli's Mandolin.

By 1994 Clockers was being filmed by Spike Lee, eventually seeing release the following year and helping the novel to become perhaps Price's most famous book. The '94 Bloomsbury edition mentions the fact that there was a film in production on the jacket flap but gives no further information, but the '92 Bloomsbury edition states that Martin Scorcese was slated to direct the film. Scorcese ended up producing it, but this contemporaneous New Zealand Herald interview with Price also notes that Scorcese was originally direct the movie, and is well worth reading for its background on the book and its road to the screen.

Price spent four years researching Clockers, hanging out with cops and drug dealers, a method he discusses in this 2003 Guardian interview. But there was actually a nine-year gap between the publication of the author's previous novel, 1983's The Breaks, and the publication Clockers, during which Price was writing screenplays himself (The Color of Money, Night and the City, etc.). This piece by crime writer Scott Phillips delves into that aspect of Price's career, as well as the long wait fans of Price's novels had for Clockers, while this post on the Dead End Follies blog offers a more recent take on the book, in particular how the novel stands today in light of Price's work on The Wire.

There's something else about this particular copy of the Bloomsbury Modern Library edition of Clockers, though, which makes it quite special: 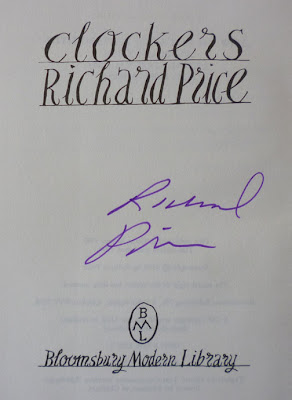 It's signed on the title page, which, considering I paid a pittance for it, is pretty cool. There are only five signed copies of this edition listed on AbeBooks, and only one of those from a UK seller, for over thirty quid. Result.

And that's it for this run of Richard Price posts. Next up, I'll probably have a couple of Kingsley Amis books... unless something else turns up...
Posted by Nick Jones (Louis XIV, the Sun King) at 04:18