Let's have a look at one last Lewes Book Bargain before we head into the working week's more thematically linked posts (well, some of them will be, anyway), namely a novel I bought in the Cancer Research charity shop at the bottom of School Hill, Lewes: 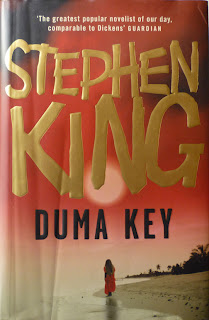 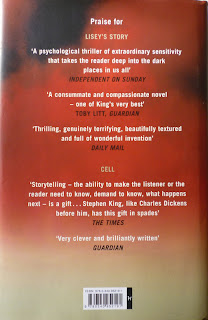 A UK hardback first edition/first printing of Duma Key by Stephen King, published by Hodder & Stoughton in 2008, with a front cover image by Lisa Kimmell. Now, the thing about Stephen King is, I've read a lot of his books. Back in the 1980s and 1990s I devoured every Stephen King book I could get my hands on (usually borrowed from Beckenham Library, south London), from Carrie (1974) to Desperation and The Regulators (1996). Only James Herbert, Richard Laymon and Gregory Mcdonald approached King in terms of the number of books from their oeuvre I consumed.

And then, inspired by Labour coming to power in 1997, I pretty much stopped reading fiction and started reading non-fiction instead – mostly political biographies and the like. And when I wasn't reading those, I was reading comic books. And so I completely lost track of King, until last year, when I read 2006's Cell. And while Cell wasn't quite prime King – not up there with The Stand (1990 expanded edition) but certainly better than, say, The Tommyknockers (1987) – it was good enough and apocalyptic enough to get me interested in the author again. And though 2009's Under the Dome was something of a step down again in quality – enjoyable in places, but kind of heartless – I'm still keen enough on King to want to try some of his novels I missed during the wilderness years. And uppermost among them, I think, is Duma Key (and possibly 2001's Dreamcatcher), which is about a writer who loses his arm and his marriage and decamps to Duma Key, Florida, where, encouraged by his youngest daughter, he begins painting pictures which turn out to be dangerously predictive...

Y'know, it was only when I got to the end of that last paragraph and sat back and took a look at it as a whole that I realised that every sentence within it starts with an 'and'. What are the odds of that happening? But rather than go back and edit it, I think I'll leave it as is as a testament to, er, something or other, and tell you about next week's blogging instead, which will consist of a short series of posts on Richard Price plus a couple on Kingsley Amis. How very, um, equally something or other. See you then.
Posted by Nick Jones (Louis XIV, the Sun King) at 05:31