A Couple of Kingsley Amis Books; 1: I Like it Here, 1958 First Edition, Plus a Bit About Victor Gollancz Dustjacket Design

As it turned out I couldn't get my hands on the book I hinted I might have for you today (if I get my filthy mitts on it in the next few days I'll try and get a review up, post haste), so I'm reverting to my original plan, which is to take a look at a couple of Kingsley Amis books I picked up recently. The first of which is this: A UK hardback first edition/first impression of I Like it Here, published by Victor Gollancz in 1958. I won this on eBay for a few quid, and it's a very nice copy indeed: a little edgewear on the unclipped jacket, and a St. Thomas' Hospital Library stamp on the front flap, but the book itself appears little-read, with very lightly tanned pages and no sign of foxing on the page edges (ooh, get me and my fancy book collecting terminology...). So, considering a decent copy with a complete, unsoiled dustjacket (spine darkening is common) can set you back anything up to £150, bit of a find. There's a small inscription on the front endpaper: 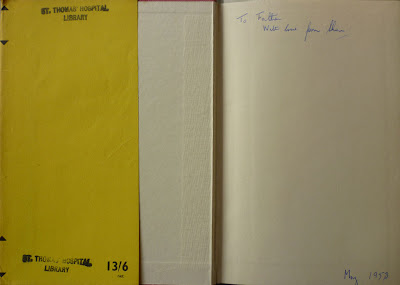 But I don't mind that sort of thing; it lends the book an added provenance (something I discussed in that Richard Price post on Tuesday) on top of the St. Thomas' Library stamp. I Like it Here was Amis's third novel, following Lucky Jim (1954) and That Uncertain Feeling (1955), and it wasn't terribly well liked by its author. This downloadable PDF interview with Amis by Michael Barber (whose Hudson Review article on Amis I hosted back at the start of the year), which originally appeared in The Paris Review in 1975, has a good quote from Amis on his problems with the novel:

Well, it was written partly out of bad motives. Seeing that That Uncertain Feeling had come out in 1955, and it was now 1957 and there was no novel on the way, I really cobbled it together out of straightforwardly autobiographical experiences in Portugal, with a kind of mystery story perfunctorily imposed on that. The critics didn't like it, and I don't blame them really. I had a look at it the other day and parts of it are not too bad. But it's really a very slipshod, lopsided piece of work.

That obvious displeasure with the finished article didn't stop Amis dedicating it to "Philip, Martin and Sally", i.e. Kingsley's sons and daughter. And if, on reflection, Amis determined that parts of I Like it Here weren't "too bad", well: even faint praise from Amis (plus my enjoyment thus far of every other book of his I've tried) makes it a novel I'm very much looking forward to reading, whatever the critical reservations.

I think what's striking about the dustjacket of this Gollancz first edition is how little information there is on it. Aside from the title, author name and mentions of Amis's two previous novels on the front (and the title/author name/Gollancz logo on the spine, of course), there's no precis of the story or information about Amis on either of the flaps or the back cover; they're all just blank yellow. That's not untypical for Gollancz books around this period, though; my 1963/1964 Gollancz copies of The Spy Who Came in from the Cold and the Le Carré Omnibus are similarly unadorned, aside from a pertinent press blurb or two. I guess even by this early stage in his career (as with Le Carré) Amis had already made a big enough splash not to warrant further embellishment.

And it's also true to an extent that those distinctive yellow Gollancz dustjackets almost sold themselves. The Gollancz house style was conceived by typographer Stanley Morison, a director at the publishing house who, among his multitudinous achievements, designed many of the typefaces we take for granted these days, including Times and Times New Roman (that latter with Victor Lardent). According to this V&A article, publisher Victor Gollancz "was something of showman and wanted his books and the advertisements for them to be as visually arresting as possible. In keeping with Gollancz's sense of showmanship, Morison created a bold, instantly recognisable design using strong typography on a bright yellow background. This house-style was used for many years on innumerable Gollancz books. Each book, often crammed with information in varying typefaces and sizes, became an eye-catching, poster-like advertisement both for itself and for the Gollancz brand."

It certainly did the trick. Secondhand bookseller aggregator AbeBooks recently posted an appreciation of Gollancz, and a cursory glance at the accompanying gallery of covers confirms their striking nature (it also had me drooling over some of the first editions of books by Amis, Le Carré, Anthony Price and J. G. Ballard).

There was, however, one flaw with the Gollancz yellow (and red) dustjackets – more of a production flaw than a design one – one which back then would have seemed unimportant but which for book collectors has become more of an issue as time's worn on. In common with many other publishers around this period Gollancz's jackets were designed to both protect the book and act as a bright advertisment for it. They weren't intended to be kept pristine themselves, merely to keep the book in readable condition. To that end they were unvarnished and printed on thin, rough paper, and as a result surprisingly few of them have survived to the present day without becoming torn, marked, or generally grubby. Which is why my copy of I Like it Here was, as I say, a bit of a find.

Let's move on to the second Kingsley Amis book I have to show you, which also marks the completion of my collection of booze-themed Amis books...
Posted by Nick Jones (Louis XIV, the Sun King) at 04:56