Continuing Paperback Week – and also continuing with the books I bought at the recent London Paperback and Pulp Fair – we have this: 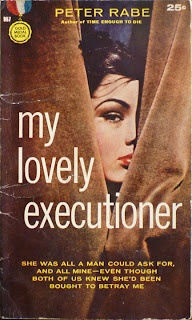 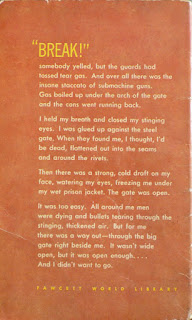 The US paperback first edition/first printing of Peter Rabe's My Lovely Executioner, published by Fawcett/Gold Medal in 1960. I was rather pleased with this find, which I chanced upon after a hell of a lot of rifling through boxes of books. I did see another Peter Rabe US paperback at the Fair (and one or two later UK editions too), but it was a second printing and kind of falling apart. This one, however, although it's evidently been stuffed in someone's back pocket and then sat on – hence those spine folds – is in otherwise good nick, and it's a first printing.

I've blogged about Peter Rabe a few times before, so I won't add anything here about him, except to direct you to George Tuttle's bittersweet interview with the author, conducted shortly before Rabe's death in 1990. I also can't tell you who the cover artist is on this first edition of My Lovely Executioner (not doing very well today, am I? Never mind, if you're really unlucky there might be a second post today anyway), but I can tell you that, unlike the other Rabe books I own, this one's written in the first person, narrated by escaped prisoner Jimmy Gallivan, who gets wrapped up in a fellow escapee's dastardly scheme.

I'll be returning to Rabe at some point post-Paperback Week, with at least one post on a surprising (it was to me, anyway) edition of one of his novels. Next up this week, however, we have something from a firm favourite of Existential Ennui, not to mention a successor to and inheritor of Peter Rabe's pulpy crown. Can you guess who it is yet?
Posted by Nick Jones (Louis XIV, the Sun King) at 04:12