From Francis Clifford's Honour the Shrine, next up in Paperback Week we turn to the novel that inspired my acquisition of that Clifford book in the first place – or rather, the paperback edition of that novel: 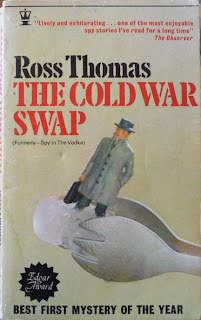 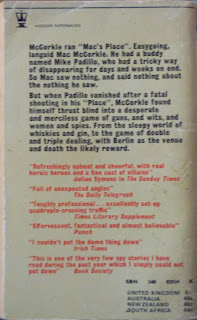 This is the UK first paperback edition of Ross Thomas' The Cold War Swap, published by Hodder & Stoughton in 1968. But not only is it the first UK paperback edition of the novel, it's also the first UK edition of the novel – at least under its original American title. As I detailed (at length, as ever) in this post, Hodder initially published the novel in 1967 in the UK under the title Spy in the Vodka, for reasons known only to themselves, although it may merely have been so as to surf the spy fiction wave washing through publishing at the time (as if 'Cold War Swap' didn't scream 'espionage!' already). Whatever the truth, it's telling that they reverted to the original name for this first paperback edition, and that every edition thereafter stuck to the original title.

I wrote about the story itself in that previous post, but I've had a little time to digest it now, and it's improving with age; what's stayed with me is the elegance of the prose, the wry narration, the occasionally bleak, dark passages, particularly the bits set in East Berlin. It's also notable how different it is from another Ross Thomas novel I'm reading right now, which, if my plans work out, I'll hopefully be blogging about next week as part of a whole week's worth of posts dedicated to Mr. Thomas. Have to say, though, I'm slightly perplexed by one of the press quotes on the back of this paperback, from Julian Symons of The Sunday Times (who crops up a lot on the back covers and flaps of the books I buy; being a crime writer himself he was obviously the go-to guy for thrillers and the like during this period), who reckoned that The Cold War Swap was "upbeat and cheerful". To dust down a hoary old cliche of a question: did he read the same book as me? There's plenty of dry wit in the book, but cheerful? Upbeat? With all that death and double-crossing? I beg to differ.

As to why I bought this paperback when I already have that Spy in the Vodka hardback... er... well... that's a very good question. To which my answers would be: it was on eBay, it was cheap (which copies of this fairly scarce edition usually aren't), and I liked the cover (although I haven't a clue who designed it or took the photo), with that cute little spy in the ice cube, which is quite fitting for a novel that's based in part around a bar – Mac's Place – and is variously soaked in booze (the narrator, Mac McCorkle, is certainly fond of a tipple or ten). And you can read more about that bar (and Mac, and his partner, Mike Padillo) here, here, here and, indeed, here.
Posted by Nick Jones (Louis XIV, the Sun King) at 09:28