We're approaching the end of Paperback Week now; I've got one more book to show from the Paperback and Pulp Fair, and then a double-header that'll act as both an introduction to next week's blogging and a tease for a future post. Let's have a look that Fair book first though: 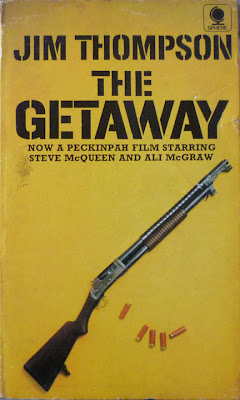 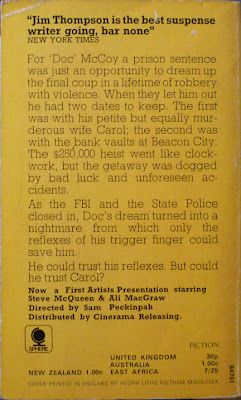 The UK first paperback edition of Jim Thompson's The Getaway, published by Sphere in 1973. I've read The Killer Inside Me, which, looking back, was a bit of a slog if I'm honest, although that was more to do with the brutal nature of the story than with the writing. But I like Sam Peckinpah's 1972 movie adaptation of The Getaway, and I've always wanted to read the original, so when I saw this at the Paperback Fair for two quid, I 'ad it.

The Getaway was originally published in the US in 1959, but it didn't get published in the UK until 1972 (when the Pekinpah movie was released) by W.H. Allen. And unusually for Thompson, and unlike the '59 American Signet edition, Allen issued the book as a hardback. In fact only four Jim Thompson novels made it into hardback in his lifetime (not three, as is sometimes misstated): that British edition of The Getaway, and the US first editions of his first three novels – Now and On Earth (Modern Age, 1942), Heed the Thunder (Greenberg, 1946) and Nothing More Than Murder (Harper & Brothers, 1949). Now and On Earth is so scarce it'll set you back ten grand or so, but even the others can run into the thousands of pounds. After those first three novels, though, and with the exception of that later UK hardback, Thompson was essentially consigned to the lowly paperback format for the rest of his life. (He was reevaluated and rehabilitated in multiple hardcover editions once he was in the ground.)

Indeed, what links Jim Thompson and Richard Stark and Peter Rabe (and maybe even, to a lesser extent, John D. MacDonald and Ross Macdonald, although that's arguable and depends on your point of view), aside from their being rough contemporaries and criminally minded (fictionally speaking) is that their natural home could be said to be the paperback book. After his early dalliance with hardcovers the bulk of Jim Thompson's work debuted in paperback, and the same with Rabe, while the first twelve Parker books Donald Westlake wrote as Richard Stark all came out first in paperback (the Parker novels started appearing in hardback from 1971's Deadly Edge onwards). Because back then – and even today in some circles – genre fiction was considered – if it was considered at all – disposable trash, and disposable trash deserves an equally disposable format. Tellingly, the last novel of Thompson's to debut in hardback in America, Nothing More Than Murder, was also his first crime novel (his previous two books were a semi-autobiographical novel and a family drama). I don't know if that's the reason Thompson's novels moved to paperback, but it sort of makes sense.

As I mentioned back at the start of Paperback Week, only half-jokingly really, paperbacks are often seen as the hardback's poor relation, particularly in the book collecting world, where the overwhelming emphasis, from prominence to terminology, is on hardcovers, and paperbacks are consigned to... well, an anonymous, windowless, airless, smallish room in the basement of an otherwise swanky London hotel. In the UK there are something like forty or fifty book fairs every month, but those are devoted largely – although not exclusively – to hardbacks. Meanwhile, in the entire country, at least so far as I'm aware, there is but a single, annual paperback fair.

I'm not sure what point I'm trying to make here, if any; after all, I mostly collect hardbacks myself. But I kind of like the fact that Thompson et al weren't respectable enough to warrant hardback publication. Their novels are about the bad stuff that fuels a lot of fiction – murder, crime – but more than that their books have unrepentant criminals as their heroes, living in amoral worlds where bad deeds often go unpunished. The novels are short, sharp, blunt and nasty, hastily written a lot of the time, yet searingly brilliant. Far from being something to be ashamed of, the paperback format, with its lurid covers, just seems right for them, a badge of honour even.

Here's a thought though, something I've been mulling over recently: is the experience of reading a novel in paperback different from that of reading one in hardback? One for another time, perhaps...
Posted by Nick Jones (Louis XIV, the Sun King) at 05:00