If You Can't Be Good by Ross Thomas, The Alteration by Kingsley Amis, and the Return of Beverley le Barrow

And so we reach the end of Paperback Week with two books that act as taster of things to come on Existential Ennui (and apologies for that cumbersome post title, but it makes it easier to search for, should I or anyone else not in their right mind wish to do so): 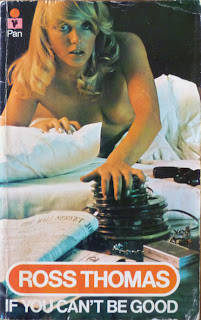 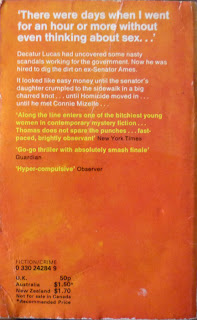 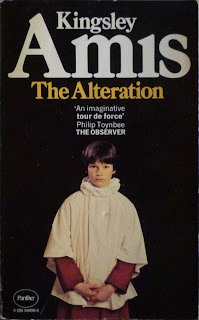 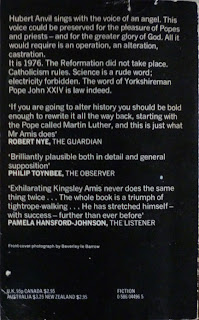 Up top we have the UK Pan paperback edition of Ross Thomas' political thriller If You Can't Be Good, published in 1975 and reprinted in 1976 (originally published in hardback by Hamish Hamilton in 1974); and underneath that is the UK Panther paperback of Kingsley Amis' alternate history tale The Alteration, published in 1978 and reprinted twice (originally published in hardback by Cape in 1976). So why am I showing you these two somewhat disparate books? (Apart from they're both paperbacks, and I'm a fan of both authors.) And what could possibly connect them? (Ditto.) And why should you even care? (You'll have to answer that one yourself I'm afraid.)

Well, the Ross Thomas paperback I bought partly because I can't seem to find a reasonably priced copy of the UK Hamilton hardback anywhere, and I've been hoovering up Ross Thomas UK hardback firsts recently (more on that in a moment), but also because the cover intrigued me. See, to me that photo looks suspiciously like the work of Beverley le Barrow, also sometimes called Beverly Lebarrow. We've run into Beverley before on Existential Ennui, first on a couple of other Ross Thomas books, then on a 1976 edition of P.D. James' Cover Her Face, and I've become weirdly fascinated by her. I knew that Beverley 'had form' as far as '70s UK hardback editions of Ross Thomas books (and others) went, so I nabbed this copy of If You Can't Be Good on eBay to see if this was her work too. Unfortunately, there's no cover credit anywhere on the book. Shit. But if we compare it to these previously featured Le Barrow efforts: 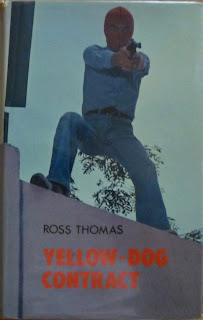 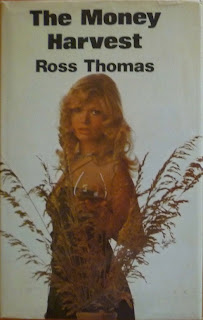 I think we can surmise that it's almost certainly her work. And having now done some of my customarily exhaustive research, I've discovered that Beverley was very active throughout the 1970s, providing covers not only for Hamish Hamilton but also Panther and Grafton, Michael Joseph, and more besides. She seems to have been something of a 'glamour' photographer too; many of the models she used on her book covers were, I think, regulars on the third page of certain British newspapers (note the exposed nipple on that If You Can't Be Good cover). Sometimes she used actors as well. And while her photos did grace such insalubrious fare as the works of Xaviera Hollander, Douglas Hayes and Stanley Morgan, she also created covers for Dick Francis, Brian W. Aldiss... and Kingsley Amis.

Yep, that The Alteration cover is by Beverley too. I saw an image of that Panther edition cover online and thought it looked like it might be by her, so I bought a copy – despite already owning a hardback first edition of the novel; you see the sacrifices I make for you? – and found that it was. And it's not the only Amis cover one of her photos has appeared on: 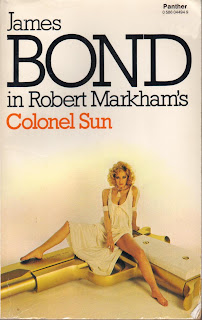 The 1978 Panther paperback reprint of Amis' pseudonymous James Bond novel, Colonel Sun, also sports a Le Barrow cover photo. Indeed, Panther reissued every single Bond novel as a paperback in the late 1970s, all with Beverley le Barrow covers, perhaps her crowning achievement. I'll be returning to those in a few weeks with a full cover gallery, but you won't have to wait all that time for some more Le Barrow goodness, oh no. There'll be more from our Bev right around the corner, because next week is Ross Thomas Week here on Existential Ennui, featuring reviews of some of his novels, showcases of UK first editions – including a couple of absolutely stonking Le Barrow covers – some behind-the-scenes publishing history, and more besides. Truly, there will never have been so much Ross Thomasness gathered together in one place on the internet.
Posted by Nick Jones (Louis XIV, the Sun King) at 05:45