This week, all week, Existential Ennui will be celebrating the humble paperback book. Because at a time when e-books look increasingly likely to eventually supplant the paperback, this most humble yet still special, versatile and fantastically successful format can surely do with some celebrating. While hardbacks, with their fancy wraparound dustjackets (and doesn't that 'jacket' just imply aloofness, a cut above, upper class?) and solid, dependable case binding are seen as the respectable face of book collecting and publishing, the poor little paperback, forever getting folded and creased and spine-cracked, stuffed in pockets and handbags and left on trains and in loos, is damned as disposable, discardable, destroyable. In second hand bookshops, hardbacks get to nestle snugly inside in the warm on specially constructed bookcases; meanwhile, outside, the paperbacks sit and shiver in dump bins, browning and warping in the elements. If jacketed hardbacks are the aristocracy of the book world, paperbacks are the lumpen proletariat.

Don't get me wrong – anyone who's read this blog will know that I do love hardbacks. But there is also a place for paperbacks in my collection too. Often their covers and design outshine their supposedly more sophisticated brethren. So this week I'll be singing the praises of the paperback, through a series of posts on recently acquired books, many of which I picked up at the London Paperback and Pulp Fair, which took place at the end of October in a swanky London hotel... or rather, in the basement of a swanky London hotel, in an anonymous, windowless, airless, smallish room – which kind of says it all really. Perversely, however, the first couple of paperbacks I'll be showing you didn't come from the Paperback and Pulp Fair (as you'll see, there'll be connecting threads between the books I show this week other than simply where they came from). They came instead from the good ol' internet. And we'll begin with this: 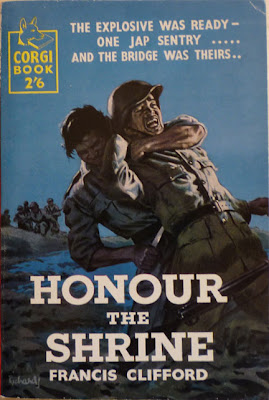 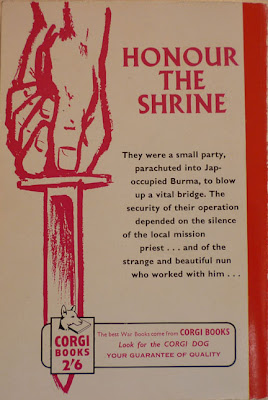 The UK first Corgi paperback edition of Honour the Shrine by Francis Clifford, published in 1957 (originally published in hardback by Cape in 1953). Clifford is the nom de plume of Arthur Leonard Bell Thompson, author of nineteen novels from 1953 to 1979, a mixture of thrillers and crime and espionage works. Like a lot of British – and American – thriller writers from the 20th century, he's increasingly overlooked, and his entire body of work is now out of print, with the exception of 1962's Time is an Ambush, which is available print-on-demand from Ostara Publishing. Ostara also have the best online biography of Clifford, which you can find here.

Honour the Shrine is Clifford's debut novel, a taut, first-person World War II tale centring on a British mission to blow up a bridge in Japanese-occupied Burma; the reason I picked it up (for a pittance, it has to be said) was because of a comment Book Glutton left on this post about Ross Thomas' Spy in the Vodka (a.k.a. The Cold War Swap), the back cover of which has a raft of glowing review quotes for Clifford's 1966 novel The Naked Runner (also published by Hodder, Thomas' UK publisher at the time). Slightly counterintuitively, though, rather than buy The Naked Runner, I bought Cifford's first book instead, mostly because it happened to float past my eyes on eBay. However, The Naked Runner does look like a cracker – certainly better than the supposedly rubbish Frank Sinatra-starring film it was turned into in 1967 – so I'll be returning to it in the not-too-distant future...

The publisher of this edition of Honour the Shrine, Corgi, was a mainstay of the British publishing scene in the second half of the 20th century, pumping out cheap paperback reprints of every type of fiction. Corgis don't seem to be as collectible as say, Pan, but they're still worth nabbing, as their painted covers can be at least the equal of more desirable paperbacks (I own a rather lovely 1952 first UK paperback edition of Patricia Highsmith's debut, Strangers on a Train, for example). The cover artist here is John Richards, and as is often the case, that bastion of decency and good taste Steve Holland has pretty much the only bio on him, right here. Go take a butcher's.
Posted by Nick Jones (Louis XIV, the Sun King) at 05:32