And so Existential Ennui's rolling tribute to underappreciated author Ross Thomas – previous posts can be found here, here, and here – continues with this: 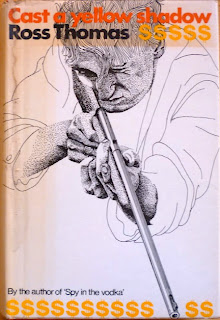 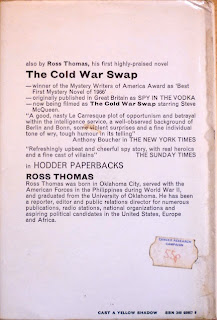 A 1968 UK first edition hardback of Cast a Yellow Shadow, published by Hodder & Stoughton, with a dustjacket design by Baker/Broom/Edwards. This is Thomas' second novel, published in the States by Morrow in 1967, a year after his debut, The Cold War Swap (a.k.a. Spy in the Vodka). It's also the second book to feature bar owner Mac McCorkle and his business partner – and occasional secret agent for the US government – Mike Padillo. This time out, the action relocates from Bonn, West Germany, to Washington, DC, where Mac has opened up a new establishment – still called Mac's Place – and where Padillo makes a reappearance following his disappearance at the end of The Cold War Swap. However, he's been stabbed, and Mac soon finds his own wife has been kidnapped and is being held by officials of an African nation who want Padillo to assassinate their Prime Minister.

There aren't too many copies of this UK edition for sale online, just two or three from the UK, a couple from the States, and then a bunch from South Africa and Australia, which is common with otherwise scarce British hardback first editions from the '60s and '70s: there are large numbers of expats in both those countries, many of whom would have taken their books with them when they emigrated, books that have since ended up in second hand bookshops. Y'know, I've always wanted to go to Australia. I've got relations out there. Perhaps some kind of combined familial visit/bookshop tour might be in order...

There's an interesting bit of blurb on the back cover of this Hodder edition of Cast a Yellow Shadow, in between the stuff about awards and press quotes for Thomas' previous book, which states, "now being filmed as The Cold War Swap starring Steve McQueen". That got me intrigued: obviously that movie never saw light of day, but the fact that the blurb states it was actually being filmed at the time suggests it might have got some way along the production process. So I did some digging, and while I couldn't find out how far along it got, I did find an interview with Ross Thomas where he said that Steve McQueen was indeed interested in starring in a movie of The Cold War Swap, but he couldn't decide whether to play McCorkle or Padillo. In the end he decided to play both characters in one, which is possibly where the project faltered. If anybody has any more info on this abortive adaptation, the comments section below awaits your input...
Posted by Nick Jones (Louis XIV, the Sun King) at 07:20