For this third instalment of Notes from the Small Press – which, for latecomers, is a series of posts on small press comics I have known – we head to 2005, and an anthology that, much like the Fast Fiction Presents: The Elephant of Surprise comic featured in the first Notes, acts as a useful snapshot of a particular moment in British mini comix. 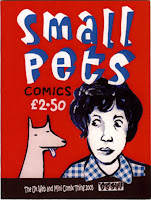 Small Pets was an anthology put together by UK cartoonist Mardou for the 2005 Web and Mini Comix Thing, a once-a-year, one-day, London-based small press event run by Patrick Findlay (which, I think, he's now knocked on the head). I have to declare an interest here: I wrote the foreword to the comic, in my then-capacity as senior editor for Titan Books, although I didn't agree to write it (or indeed this here blog post) out of any sense of egotism (well, no more than usual) or nepotism (Mardou was, and still is, a pal). Rather, it was plain to see at the time that Small Pets was stuffed full of brilliant comics and creators, and I was chuffed to be associated – if only in a tiny way – with such a talented bunch of writers and artists. The table of contents will give you an idea of the embarrassment of riches on offer: 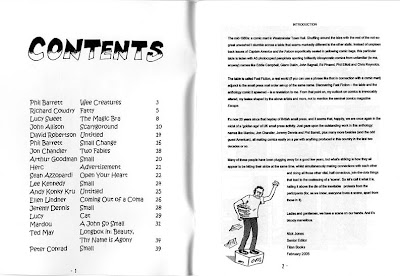 As with The Elephant of Surprise, Small Pets featured contributions from most, if not all, of the leading lights on the UK small press scene at the time, plus a couple of guest Americans and an Irishman. And as with The Elephant, it just so happened that all of those cartoonists were simultaneously hitting their creative stride. Irish comics creator Phil Barrett contributed two stories of everyday surrealism, with both"Wee Creatures" and "Small Changes" dropping whimsical elements – mysterious teddy/snake hybrids in a kid's bedroom; an outlandishly oversized man making his way in the world – into ordinary situations. As a gloriously base counterpoint to Barrett's more grounded work, Jon Chandler's flatulent "Two Fables" gets two pages out of passing wind. 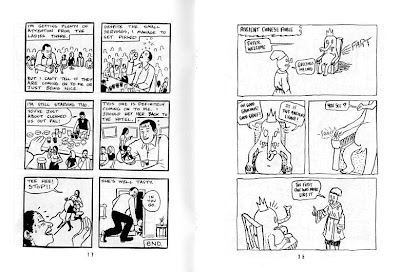 Ellen Lindner's elegant line and exuberant scripting are on full display in her rumination on wage slavery, "Coming Out of a Coma", while Jeremy Dennis' two stories are fine examples of her affecting autobiographical comics. 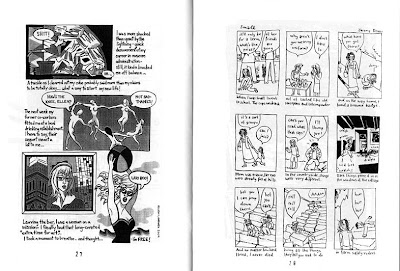 Both Lindner and Dennis are also co-conspirators with Mardou in the occasional Whores of Mensa anthology, another splendid example of small press togetherness. And speaking of Mardou, her contribution to Small Pets (aside from editing the whole shebang, of course), "A John So Small", is a brilliantly wonky take on the Oldest Profession, featuring a crossed-wires sex pest who gets off on literary little people. Mardou's story is followed, oddly enough, by one from her future husband, Ted May, whose "Longbox" is a prime example of his off-kilter Kirby-meets-underground-comix stylings. 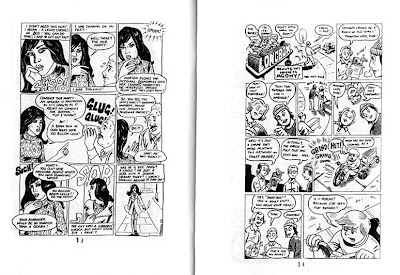 And those are only a few examples from a cast list that also includes Richard Cowdry, John Allison, Sean Azzopardi, and loads more besides. Looking back on Small Pets from a few years' remove, it really is remarkable how many great cartoonists Mardou managed to gather together, and the resulting comic has lost none of its energy. There's a palpable excitement rippling through the pages, as if all concerned knew this would turn out to be something special. Perhaps they all thought nothing of the sort, but in any case I stand by my slightly hyperbolic introduction: I think Small Pets really did represent a new Fast Fiction-style golden age of UK small press comics, one of those all too infrequent nexus points where a disparate group of artists simultaneously reach a creative peak and everything seems possible.

Notes from the Small Press 10: Some Sav Sadness Comics by Bob Lynch
Posted by Nick Jones (Louis XIV, the Sun King) at 09:02