Like a lot of writers toiling in the unforgiving fields of pulpy postwar paperbacks, Donald E. Westlake wrote under an array of pseudonyms. The most famous of those is, of course, Richard Stark, under which moniker Westlake created the Parker series of crime novels in the early '60s. But as well known as that particular pen name is today, it's easy to forget that, back then, it was just one of many used by Westlake to churn out umpteen books every year. Richard Stark may have proved to be rather special, but from Westlake's perspective there weren't nothing special 'bout Stark at the time.

Aside from Stark, Westlake wrote books under the names Tucker Coe, Samuel Holt and Curt Clark. But all of those pseudonyms debuted after Stark's debut, 1962's The Hunter; there are a whole boatload more alter egos who preceded the birth of Richard Stark. I blogged about one of those, John B. Allan, back at the start of June, but Allan's single contribution to the Westlake canon, a 1961 biography of Elizabeth Taylor, is somewhat mild in comparison to the material published under some of his other nom de plumes in the late '50s and early '60s. For, like many of his contemporaries, including Lawrence Block, Westlake bashed out (so to speak) dozens of pseudonymous soft porn paperbacks. 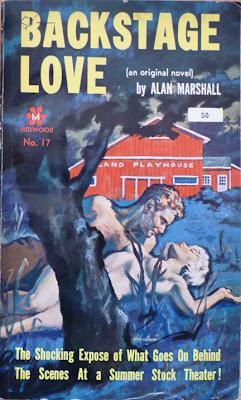 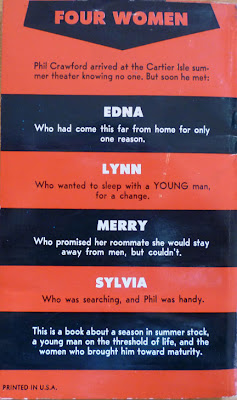 A US paperback of Backstage Love by Alan Marshall, published by the amusingly named Midwood/Tower Publications in 1959. This was lurking in a pile of similarly smutty paperbacks in an alcove under some stairs to the side of the rather ramshackle shop. It took me a few moments before I realised what it was; I would've recognised one of the better-known Westlake alter egos right away, but I'm less familiar with the filthier end of his oeuvre. And not carrying the complete annotated list of Westlake wank-fodder round in my head, I wasn't completely sure Backstage Love was the genuine article: quite apart from the immediate poser of whether Alan Marshall was indeed Westlake, there's also the thorny problem that, as with many of these soft porn author identities, other writers also used the Alan Marshall moniker, so not all the Marshall-written books were by Donald E. Westlake.

I'd like to say I leafed through the book and immediately recognised Westlake's style, but while these opening lines:

He had to change buses in New York, with a two hour wait. He had never been in New York City before, so he left the Port Authority Terminal and walked up a block to 42nd Street. It was early June and the late-morning sun made the sidewalks look bright and the buildings look clean.

could conceivably have been penned by him, coming across as proto-Stark, they could also have been penned by countless other writers. No, what I think really tipped me off was the setting for the novel: a summer stock theatre. That's a theme that Westlake has returned to more than once, with the events of Pity Him Afterwards (1964) being set in a similar location, and Alan Grofield from the Parker novels spending his summers acting in stock theatre. And anyway, at £1.50 it was worth the gamble.

There's a few copies of Backstage Love on AbeBooks for up to £25, but those are all in the States; it's unusual to chance across a copy in a UK bookshop. I rhapsodised briefly on Sunday about the pre-internet 1970s and 1980s (and even '90s) when books like this were tantalisingly out of reach for us Brits; finding this book was almost like stepping back in time to those years, when a junk shop in Penge Market might, if you're lucky, turn up a dreamed-of comic or paperback. I figured that sort of thing just didn't happen anymore, with collectors being so virulent. Turns out, it does.

The cover artist on Backstage Love is the appropriately named Rudy Nappi, who, rather ironically given the book's naughty nature, is best known for his covers for that squeakiest of squeaky clean characters, Nancy Drew. Which just goes to show, everyone has a dark side...
Posted by Nick Jones (Louis XIV, the Sun King) at 13:40