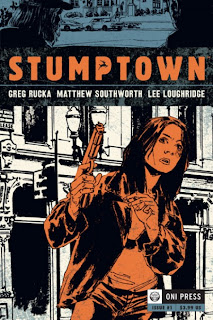 It's a much-remarked upon peculiarity of the American comic book market that genres which enjoy massive popularity in the wider world – crime fiction, fantasy, etc. – are consigned to the margins of the form in favour of superhero comics. Now, you could make an argument that superhero comics actually embrace genres like crime, including them in their genetic make-up... except I'm pretty positive that if you removed any hint of crime fiction from superhero comics, comics fans would still continue to buy them. What I'm getting at is, sure, superhero comics incorporate elements of crime fiction, suspense, science fiction, fantasy... but hardcore fans continue to buy them in spite of those elements, not because of them. It's really very simple: they just like superheroes.

The unfortunate side effect of this is that interesting attempts at genres other than superhero comics (and superhero comics are a genre, whatever some apologists claim) are sidelined. They're reviewed online, for sure, but that coverage is blotted out by the overwhelming noise generated by superhero fandom. This is understandable when what that fandom mostly wants is more superhero comics (although these days in noticeably smaller quantities), but the knock-on effect is that comics that dabble in other genres sell in pathetic numbers, which in turn discourages publishers and even creators from attempting them in the first place. 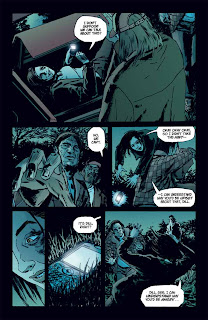 It's also why reviews or critiques (like this one) feel compelled to bang on about superhero comics before even getting to address a work which has nothing to do with them. Take writer Greg Rucka and artist Matthew Southworth's Stumptown, which finished its initial four-issue run the other week. Now, admittedly Stumptown is published by an indie publisher, Oni Press, who can't really compete with the market-dominating Marvel and DC. Even so, it's the kind of thing you'd think would interest fans of, say, Dennis Lehane or George Pelecanos – a crime/suspense story with wide appeal, in other words. Set in and around Portland, Oregon, it follows the travails of P.I. Dex (short for Dexedrine, natch) Parios, who's hired to find the granddaughter of a casino owner and finds herself mixed up with MS-13, the real-life US gang composed of Central Americans.

Dex is probably the best thing about the series, a gambling addict and fuck-up who balances a crumbling private investigation business with being a carer for her disabled brother. And Rucka has form with strong female characters: witness damaged but brilliant spy Tara Chace in Queen & Country; devoted but strong-willed aide to Batman Sasha Bordeux in Detective Comics, the conflicted Detective Montoya in Gotham Central; and Rucka's take on the ultimate strong female during his first rate run on Wonder Woman. The story is straightforward and decidedly low key – perhaps too low key for an opening effort. But Southworth's evocative efforts at depicting a realistic Northwestern setting (there are text pieces at the end of each comic revealing his research) help lend the tale weight, and the characterization throughout is deft and sure, right down to nice moments with minor characters like the thugs Dex keeps getting creamed by. 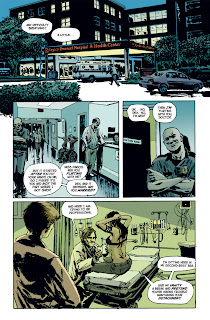 Stumptown's very existence in a field dominated by superheros makes it feel more extraordinary than it probably is, but to be frank, even a solid effort like this deserves to be actively encouraged. There are so few crime comics around – Criminal, Scalped... er, that's kind of it – that any addition to the ranks should be celebrated (see also SF... mysteries... you name it...). Which brings me back to my original point: the first issue of Stumptown apparently went into a second printing, but even in a fairly major and broadly stocked comic shop like the one in Brighton I frequent, the series vanished from the shelves after that first issue. I had to get my copies of the subsequent issues off eBay. Basically, in the UK, once you get outside the London comic shops, Stumptown ceased to exist. I imagine it's a similar story in the States.

And that, if you'll pardon the pun, is a crime, particularly seeing as Stumptown is a better-looking comic book than almost anything else on the shelves. Generally speaking, comic book covers are a cavalcade of ugly, but take a look at the four Stumptown covers, drawn by Southworth and I think designed by Keith Wood:

That's a nice, contemporary piece of design; the only other recent comic book covers that compare are, oddly enough, those adorning Ed Brubaker and Sean Phillips' Criminal. Funny that. Rucka and Southworth have stated they'll be continuing Stumptown, so I urge you to pick up the graphic novel of volume one whenever it appears. And hey, if enough people do, you never know – maybe I won't have to head to eBay to get hold of volume two. Here's hoping anyway.
Posted by Nick Jones (Louis XIV, the Sun King) at 09:01